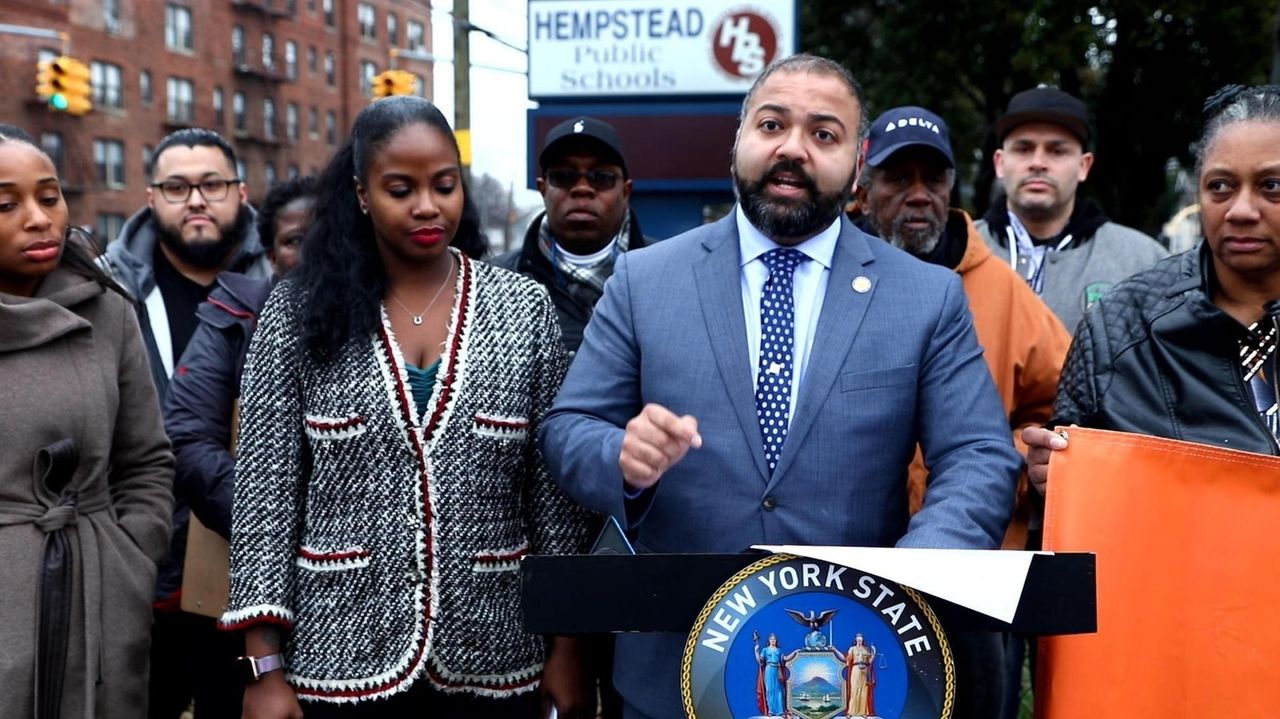 State lawmakers touting a new law that installs a monitor to oversee the Hempstead school district's academic plans and finances faced some skepticism Thursday at a news conference meant to lay out the next steps.

"This rainy day marks a bright, new future for our Hempstead schools and our children," Sen. Kevin Thomas (D-Levittown) said before a handful of residents in front of the district administration building.

Thomas and Assemb. Taylor Darling (D-Hempstead), who also was at the news conference, sponsored the bill, which was amended recently to appoint one monitor as opposed to three and was signed by Gov. Andrew M. Cuomo on Monday.

Over the next five years, the monitor will provide oversight and guidance for the district of 7,600 students.

Hempstead has been opposed to state monitor oversight, saying the district instead needs more funding from the state.

The district wants "to focus on the real-life needs of the children and how the state has continuously underfunded our high-need school district," school board president David Gates said in an emailed statement. "All of the progress our district has made to date, including increasing our graduation rate by nearly 30 percent in two years, is all jeopardized by lack of funding from [the state]."

Years of financial mismanagement and poor graduation rates prompted lawmakers to support legislation to install a monitor, who will be appointed by the state education commissioner.

"With this legislation, we have a platform and an opportunity to work together to make sure Hempstead becomes a real-life fairy tale success story," Darling said.

The monitor's first order of business will be to schedule three public hearings within the first 60 days. Each hearing will be focused on a different topic: state intervention, academic performance and finances.

Candidates for the position are being interviewed, and a salary will be negotiated following the selection, Thomas said. Lawmakers said the salary would not be covered by the district, though it was unclear which department would pay the monitor's salary.

"This type of oversight is needed here," resident Dan Oppenheimer said. "I think it's important that it still allows the Hempstead residents to participate and have their input."

One resident said the district needs money to fix its crumbling infrastructure more than it needs a state monitor.

"What improvements could this monitor make that [Jack Bierwirth] didn't already make?" Patricia McNeill said. "It's fine having a monitor, but we also need more resources to cover the cost of more teachers and update these buildings."

Last year, Bierwirth, then the state’s adviser to the district, stepped down after serving two years. Under his guidance, the district improved its graduation rates.

The percentage of students graduating from the district rose from 39.7% in 2015 to 44.3% in 2018, according to the latest data from the state Education Department. Hempstead officials said the rate jumped in 2019 to 63%, based on graduation rates through August 2019.

Meanwhile, the state average graduation rate is more than 80%.

"The Hempstead school district is going in an upward trajectory right now, and we want to keep it at that," Thomas said.

By Nov. 1, the board of education will need to work with the monitor to develop financial and academic improvement plans for 2020-21 — and the four subsequent school years. The plans will be based on findings from the three public hearings.

The school board also will need to conduct a public hearing on each plan before they’re sent to the education commissioner for final approval by Jan. 15, 2021.

The monitor also will need to review all budgets and submit them to the commissioner for approval. The law gives the monitor power to disapprove travel outside the state and assist in resolving disputes and conflicts among school board members and the superintendent.