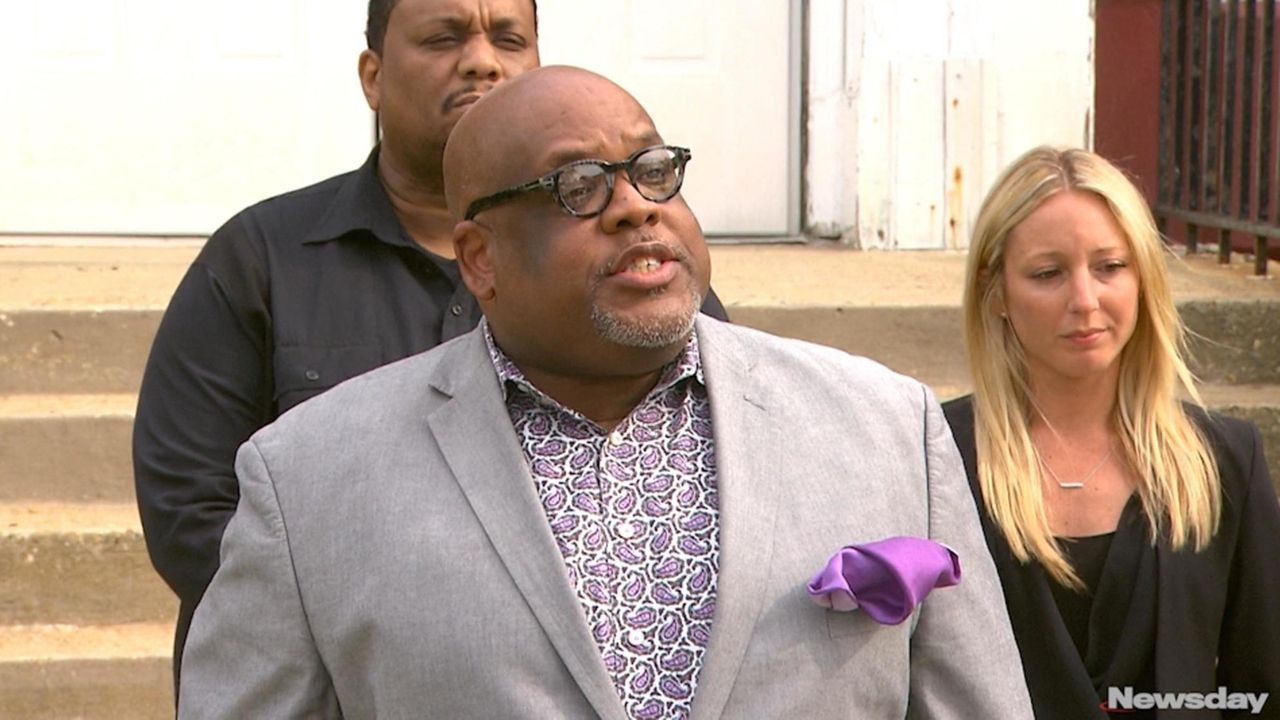 On Friday, Hempstead school board member David Gates condemned the release of an independent auditor’s preliminary report on the district’s finances to the media, saying he and several other board members were not privvy to the premiliinary report, nor were they consulted on its release.  Credit: News 12 Long Island

Two Hempstead school board members on Friday condemned the release of an independent auditor’s preliminary report on the district’s finances to the media, saying it was politically motivated.

Trustees LaMont Johnson and David Gates said copies of the document by Plante Moran LLC, a Michigan-based certified public accounting and consulting firm, had been provided only to board members, district officials and the school district’s lawyer.

Every school board member “should be trying to let everyone know the positive things that are happening instead of trying to use the report for political gain,” Johnson said. “That’s exactly what’s going on.”

The five-member board hired Plante Moran last June to investigate the district’s finances. Its initial findings, released to the board in mid-January, included more than a dozen red flags about payroll practices and vendor payments, according to a copy of the report obtained by Newsday, which published an article about it on Monday.

Names of employees and vendors had been redacted in the copy obtained by Newsday.

Friday, outside the district offices on Peninsula Boulevard, Johnson and Gates were joined by Nicole Epstein of Gotham Government Relations and Communications LCC, the public relations firm representing the district.

Board member Randy Stith, who usually votes with Johnson and Gates to make up the board’s majority, was not present. Nor were board president Maribel Touré or vice president Gwendolyn Jackson, who typically vote together.

The seats held by Touré and Jackson are up for election on May 15. The two are running as a team, vying against Carmen Ayala and Patricia Spleen, who are running together.

Touré, in an interview Friday, said she is “upset” about the release of the document but she’s “not going to be wasting time finding out who leaked it.” It is “more important” to focus on the final findings of the auditors and correct any problems, she said.

Stith, in an interview Friday night, said he is “very concerned about the document being leaked.”

“I look forward to investigating who was responsible for the leak and holding those persons responsible,” he said.

Jackson could not be reached for comment Friday night.

The need to end divisiveness and infighting on the board and stabilize the district’s finances have been major points made by a state-appointed adviser to the district, Jack Bierwirth. The veteran former school superintendent was appointed by state Education Commissioner MaryEllen Elia in September to examine the 8,000-plus student district and report back to her on its finances, operations, curriculum and personnel.

Epstein, who said she was representing the district, said, “This leaked report has harmed the school district. It has harmed employees, and ultimately again, the worst part of this all, is it’s harming the students.”

Gates and Epstein echoed the concerns of acting Superintendent Regina Armstrong, who last week told Newsday that the report’s findings had yet to be fully investigated. Some of the red flags could stem from Plante Moran’s unfamiliarity with the district’s bookkeeping practices, Armstrong said then.

The Hempstead board, as part of its turnaround efforts, approved an $85,000 contract with Plante Moran in mid-June.

They included payments to former employees, instances where employees’ net pay exceeded their gross pay, and 25 employees who didn’t have a birth date in the master file, according to the document.

The 24-page report also identified what auditors called “unusual trends” in vendor payments, such as duplicate amounts paid to the same vendor, and payments made on weekends, when the business office should have been closed.

The board in April unanimously approved a $100,000 contract extension with the auditing firm.

That extension expanded the scope of the audit to include the current school year through April 30, Gates said Friday.

Auditors of LI school district raise dozens of red flagsAuditors identified "unusual trends" in vendor payments, such as duplicate amounts paid to the same vendor and rounded dollar amounts that "could be a red flag of fictitious or inflated invoices." Hempstead board extends contract with auditorThe Hempstead school board has extended its contract with Plante Moran LLC, the company it ...