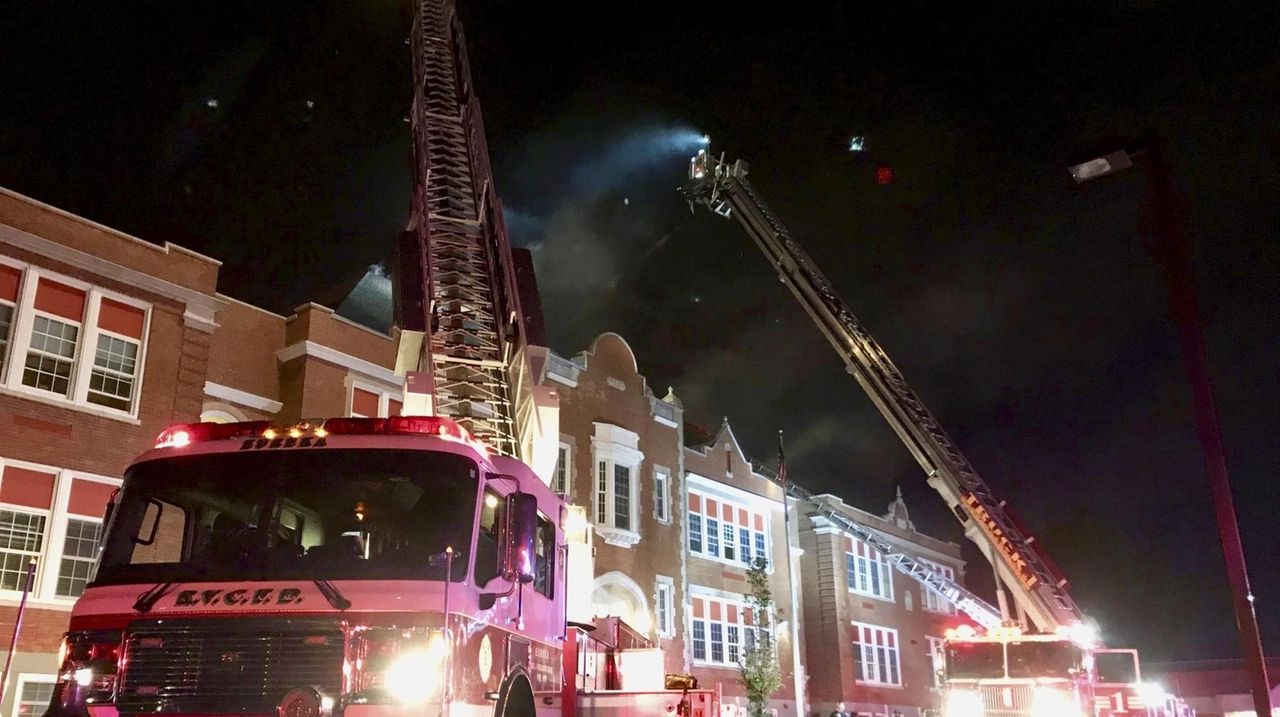 The Hempstead school district’s Prospect School will not be ready to open for the first day of classes, leaving approximately 600 students displaced due to damage caused when the building was struck by lightning last week, district officials said Monday, as they detailed the district's plans for temporarily relocating the students so they will not miss classes. Credit: Jessica Rotkiewicz; Photo Credit: Newsday / Kadia Goba; Lou Minutoli, Hempstead Union free School district

Repairs from a lightning strike at Prospect School in Hempstead are expected to continue past the first day of classes, leaving approximately 600 kindergarten and pre-K students displaced, district officials said Monday.

“It looks like for the start of school we’re going to have to find temporary housing for our students,” acting Superintendent Regina Armstrong said at a special meeting of the school board held in the Hempstead High School auditorium to inform community members.

The Hempstead school district is reaching out to nearby public, private, parochial and charter schools to see if they can house students until the elementary school is repaired, she said. The students will likely be split up with 100 or so at each school, Armstrong said.

Once a plan is in place, the system, which has a high number of students for whom English is not their native language, will have to focus on getting the word out to parents and guardians before Sept. 5, the first day of school, Armstrong said. Armstrong said the district may host a meeting next week to provide updates.

The district is working with State Education Department Officials and New York State Assembly District Deputy Speaker Earlene Hooper (D-Hempstead) to find an alternative location for the more than 500 kindergarten students, as well as two prekindergarten classes housed in the building on Peninsula Boulevard.

Hooper, who is running for reelection this fall, spoke at Monday’s meeting and announced there were several volunteers to temporarily house the students, including Jackson Memorial AME Zion Church and the Academy Charter School.

“This is an act of God,” she said. “My mother told me sometimes when something bad happens it’s because something better is coming.”

Hooper announced she would give the district $1 million in discretionary funds to help pay the schools for temporarily housing the students, including leases. Hooper also said she reached out to State Education Commissioner MaryEllen Elia and the office of Gov. Andrew M. Cuomo for help. The Village of Hempstead agreed to help provide additional crossing guards where needed, she said.

“We cannot put them back there under the conditions that the school is in at this point in time,” Hooper said of the students. “It is impossible to remedy that building in two or three weeks.”

Officials are still assessing damage from the Aug. 7 lightning strike at Prospect School, which caused the roof to catch fire, Armstrong said.

Last week, Armstrong told Newsday she hoped the damage wouldn’t delay the school opening. Monday she said assessors continue to find fire damage as well as water damage caused as a result of firefighter’s efforts to extinguish the blaze. Water has continued to seep further down into the ground floor of the building, Armstrong said.

The cost of school supplies alone could be between $60,000 to $80,000 per classroom, Armstrong said. “Insurance covers a lot, but insurance doesn’t cover everything.”

School board President LaMont Johnson said the students will be “in good hands” come September.

“We’re going to make sure that whatever building they go to that it’s safe and that it’s secure," he said, "that’s our main concern is the safety of our students.”