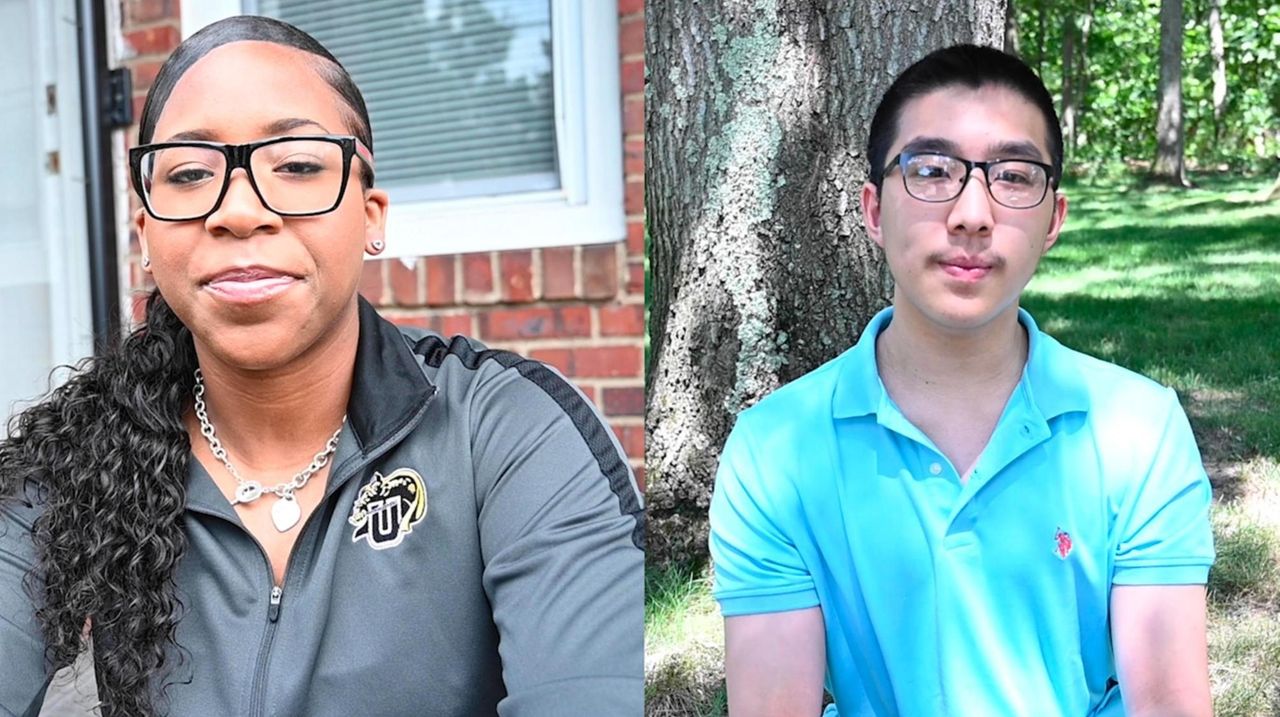 High school graduates Bailey Jeffries and Williams Sun are excited about the opportunities college might bring them, but both are unsure what the fall semester might be like. Credit: Newsday / Alejandra Villa Loarca

When John Hallasgo toured Stony Brook University in February, he was amazed by the campus’ size and scenery.

“It was so beautiful,” said the 18-year-old who will study economics at Stony Brook in the fall. “There’s a fresh sense there that you don’t get from a city campus.”

Hallasgo doesn't plan to live on campus because he will commute from home in Uniondale if campus reopens. But after seeing the residence halls, he remembered thinking the campus was “more than just a place to sleep but a place to live."

He hopes to return to the campus in August as a freshman to begin a new chapter in adulthood, but Stony Brook has not announced its plan.

Following state guidelines released earlier this week, officials at Stony Brook said the school has submitted a plan to SUNY to reopen the campus in the fall but doesn’t expect to receive the approval until early July.

College-bound seniors like Hallasgo, who had their proms canceled and a traditional graduation replaced with a drive-by ceremony or socially distant one, don't want to lose their beginning months of a college education to the coronavirus, too.

But the COVID-19 pandemic, which forced colleges and universities nationwide to close in March, continues to pose an unprecedented challenge for school officials making plans to reopen campuses in a manner that minimizes the risk for students, staff and faculty.

Schools systems such as California State University plan to cancel nearly all in-person instruction for the fall. But the system is in the minority, as two-thirds of more than 1,000 colleges tracked by The Chronicle of Higher Education said they are planning for an in-person semester. Many colleges and universities, including those on Long Island, have yet to announce their final plans.

High school graduates, meanwhile, are left in limbo with no clear sense of what college will look like.

“I don’t know what to prepare for,” Hallasgo said. “It’s very strange not knowing. … We are just waiting, worrying, stressing.”

Hallasgo will graduate from Uniondale High School this weekend, as several schools across the Island are expected to hold ceremonies.

A virtual college campus, students said, won't deliver the full college experience they’ve dreamed about for years. The intellectual debate, exchange of ideas and exposure to other life experiences may never occur if there's no physical room for encounters and connections. The learning experience itself won't be the same, either.

“When you are in-person, your whole body is engaged in the conversation,” said Bailey Jeffries, 17, of Hempstead, who will attend the CUNY School of Medicine in Manhattan. “I don’t want my teacher to see me as a grade or as my ID number.”

For those whose colleges have released reopening plans, students and their parents said they remain concerned about the risk of sharing communal spaces and want a more concrete plan.

“I’m concerned about the sharing of desks. I’m also wondering how they will handle showers and bathrooms,” said Sanchez, of Stony Brook, adding she most likely would take her own precautions by sticking to frequent hand-washing and mask-wearing.

Raffaela Dunne, an East Williston Village trustee, has 17-year-old daughter Jacquelyn going to the University of Maryland in College Park. The school said earlier this month that it’s working on a phased reopening of on-campus activities.

“I’m a little nervous because going away to college is an anxiety-provoking experience,” Dunne said. “To layer on COVID-19, having to wear masks and [be] socially distant, being in a group of potentially tens of thousands of complete strangers in strange buildings … I can see where that’s another whole layer of being anxious.”

Colleges overall are tinkering with plans to reduce density in places like classrooms and residence halls and eliminate crowding situations by offering grab-and-go meals. Some schools, including Hofstra University, are proposing a modified calendar that would end in-person activities by Thanksgiving break.

“We look at how we could minimize that traveling back and forth and the chances that would lead to students coming back with COVID-19,” said Herman Berliner, provost of Hofstra. “We wanted the semester to end, in terms of in-person classes, before the flu season really gets started and before hopefully there’s any resurgence in COVID-19.”

But even when the university makes a decision, Sun, who lives in East Setauket, felt his worry would still be far from over.

“I do worry about the people I interact with, especially my family, which has older members,” the 17-year-old said. “To say that either situation, whether I would go on campus or not, is comforting to me would be a lie. In either situation … there are things that I worry about.”