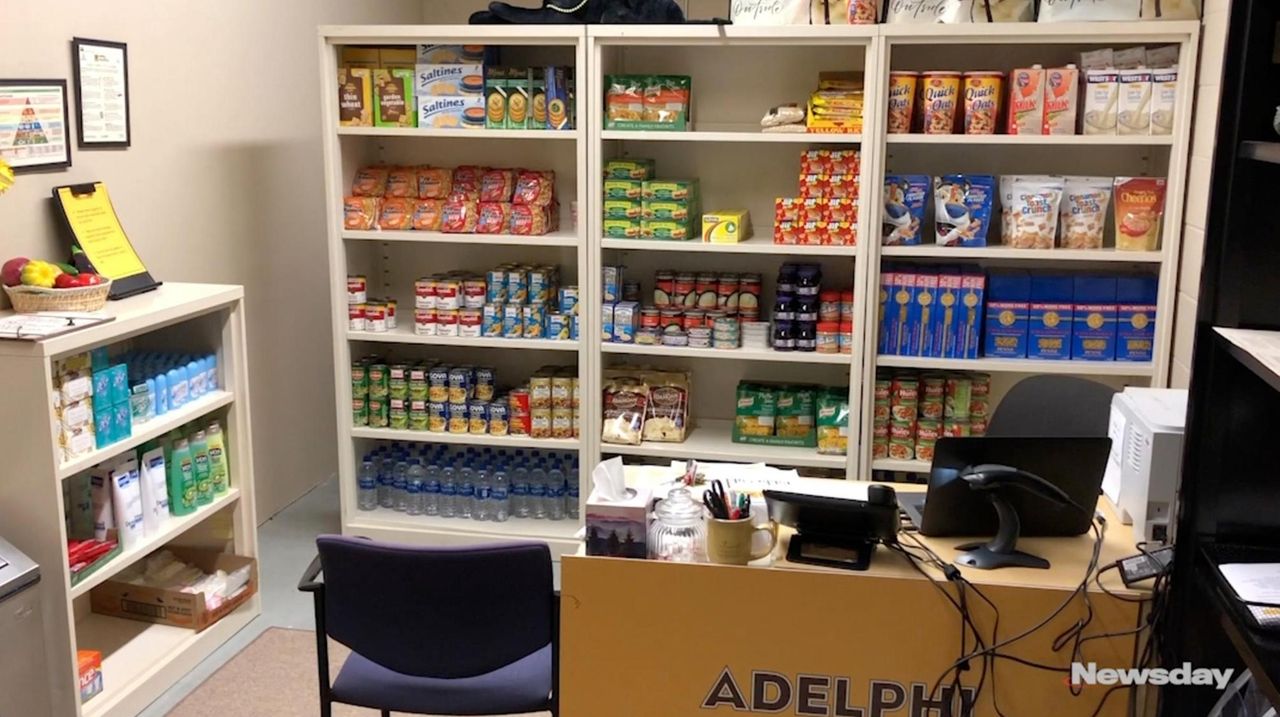 Della Hudson, associate dean of student affairs at Adelphi University in Garden City, provided a tour on Wednesday of the college's "Panther Pantry," which provides food to those in need in the college community. The service can be used anonymously by faculty, staff and the school’s more than 8,100 undergraduate and graduate students.  Credit: Howard Schnapp

Adelphi University opened a food pantry this fall on the Garden City campus, and SUNY Old Westbury debuted its "Panther Pantry." Nassau Community College's 3-year-old pantry, having outgrown its space, plans to move to a larger location to better serve the 19,000-student community. And Farmingdale State College has staff ready to help students sign up for public assistance.

Across Long Island, New York and the nation, colleges and universities continue to strengthen efforts to help students who face hunger and issues of food insecurity — the term for those who have limited or uncertain access to nutritious, safe foods. Education officials and food bank leaders say it is essential to do more.

“This is not an uncommon problem. It’s just a hidden problem, because students didn’t have a voice; people hadn’t thought about it,” said Randi Shubin Dresner, who co-chairs  the State University of New York's Food Insecurity Task Force and is president and chief executive of Hauppauge-based Island Harvest. “Food pantries on the campus are important, because it’s finally recognizing now that there is an issue and recognizing that we need to dive deeper into this.”

Food pantries or collaborations with local food banks are up and running at all 64 schools in the SUNY system, including the five on the Island, SUNY administrators and task force members said last week.

Members of the task force, comprised of higher education officials, statewide food bank leaders and representatives from health and agriculture agencies, gathered last week at NCC for the annual Food Insecurity Conference to discuss how to meet the needs of students, including the 100,000-plus attending colleges across the Island.

Nationally, about 36 percent of university students and 42 percent of community college students indicated feeling insecure about food in the 30 days before they were surveyed, according to an April report from the Wisconsin HOPE Lab, a group of researchers based at the University of Wisconsin-Madison. The survey took into account responses from more than 43,000 students at 66 higher education institutions nationwide.

Aliyah Black, 37, of Valley Stream, a mother of two who is studying radiation therapy at NCC, knows that feeling.

After working for years as an executive assistant, Black decided to go back to school.

“It’s tough,” she said. One of her books cost $135 and she was faced with a decision. “It’s either I pay for the book or feed my kids,” Black said.

She was able to get help at The NEST at NCC, the food pantry that opened in fall 2015 at the largest single-campus community college in the state and is being used as a model in the SUNY system.

The food and school supplies she picked up at The NEST have made the difference in her ability to make ends meet. “I have extra money to make sure I have my bills paid, or I can put gas in my car, or I can pay my tuition, or I can pay my books at school," Black said.

Hunger on campus is a retention issue as well, said Clare Cady, co-founder and director of the College and University Food Bank Alliance, a national nonprofit focused on addressing food insecurity on college campuses.

“Food tends to be one of the more flexible things in a person’s budget," she said. If a student isn’t able to pay attention in class because they are hungry, they may not make it to graduation, leaving school without a degree and in debt.

Awareness of the issue is growing nationwide, and the responses have become more prevalent, Cady said.

Many campuses on the Island already have pantries, including Stony Brook University, Hofstra University and St. Joseph’s College. Suffolk County Community College has three pantries, one on each of its campuses.

Last year, Gov. Andrew M. Cuomo called on both SUNY and the City University of New York system to provide stigma-free food access to students as part of his “No Student Goes Hungry Program.”

The NEST at NCC, or Nassau Empowerment and Support for Tomorrow, was founded by a committee of faculty, staff and students. The nonprofit distributes about 2,000 pounds of food each week. In its three years of operation, the pantry has served nearly 6,000 people, including students, faculty and staff, said Sharon Masrour, The NEST's founder and executive director.

The pantry has outgrown its space and must move to a larger location on campus, said Sharon Masrour, a full-time reading and basic education professor at NCC. “It’s getting to this critical point where something’s got to give."

Melissa McDevitt, 35, of Freeport, a part-time student, has gotten both food and professional clothing from the pantry.

“I live in subsidized housing and I need extra help with things at times,” she said.

Without the pantry, it “would be difficult,” McDevitt said. “I’d barely be squeezing by with paying for the textbooks. There’s a chance I wouldn’t be able to go at all.”

SUNY Old Westbury opened its “Panther Pantry" on Sept. 4, and Farmingdale State is working with Island Harvest and St. Kilian Parish in Farmingdale to assist students.

Officials are in the process of determining whether the 10,000-student college needs a pantry on campus, said Kevin Murphy, director of Farmingdale State’s Health and Wellness Center. In the interim, the center also helps students apply for public benefits, such as the Supplemental Nutrition Assistance Program. About 93 percent of Farmingdale’s students are commuters, and those who live on campus are required to have a meal plan, for which the college offers financial aid options, he said.

Since opening Sept. 5, Adelphi's service — also called "Panther Pantry" — has filled 247 orders from 96 community members, 46 of whom were repeat users, said Della Hudson, associate dean of student affairs. The service can be used anonymously by the school's 8,100-plus undergraduate and graduate students, as well as faculty and staff.

The pantry’s offerings can be accessed online, with orders given a bar code and sent to the mailroom, she said. The food then can be picked up using only the bar code, and regular shopping bags are used to provide further privacy.

“Going to school and trying to fit in and belonging is stressful enough without having some kind of label on your back — 'In need of food,' " Hudson said.

The SUNY task force next plans to focus on collecting data to better serve these populations, said John Graham, SUNY associate provost for student affairs who is coordinating the group's efforts. “Many of our campuses have been responding … but they're not really tallying exactly how many students are coming and who they are."

The support can't stop at food banks, Cady said. Services are needed that are long-term and more holistic, such as scholarships, food vouchers, and having students sign up for public assistance, she said.

“The solutions must be multifaceted, because students are complex and they have needs that move or change over time," she said.

CORRECTION: The location of Island Harvest was incorrect in a previous version of this story.