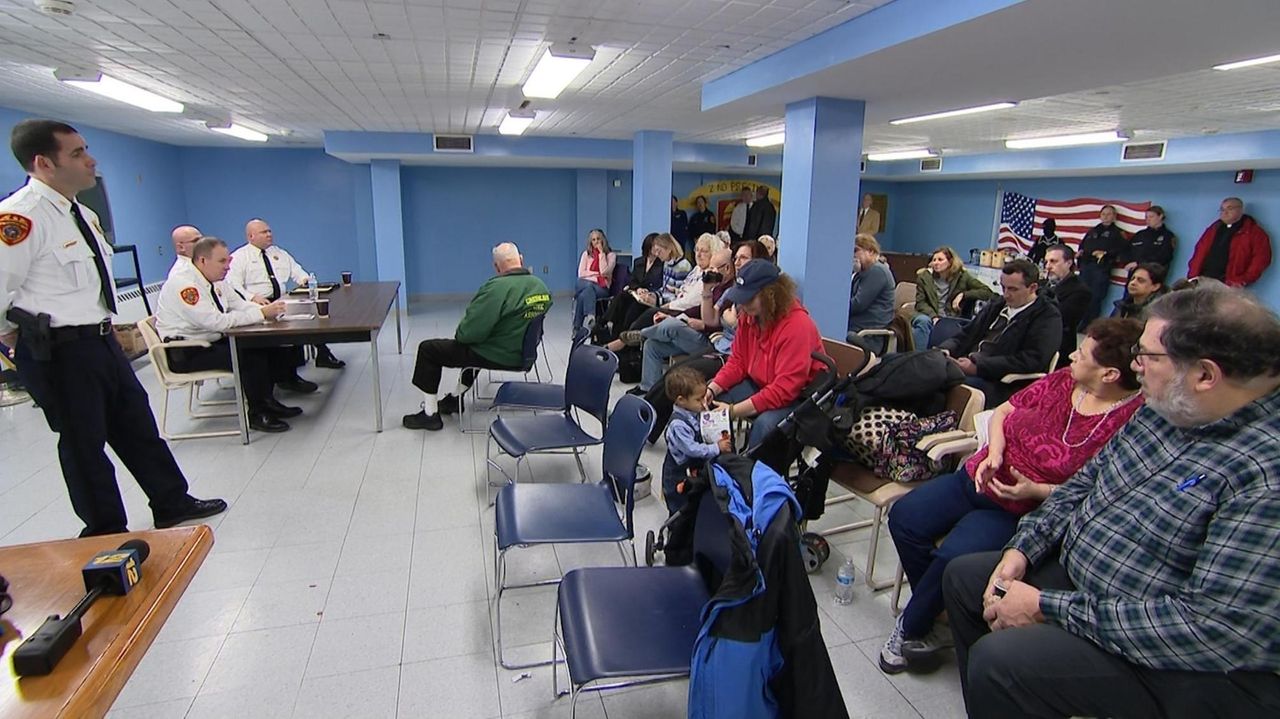 Dozens of Long Islanders turned out Tuesday to question Suffolk police officials about what role a school resource officer played in the deportation of a Huntington High School student. The crowd of more than 50 people aired concerns about the handling of the student at the monthly community meeting at the Second Precinct in Huntington. The deportation came to light in an account in The New York Times Magazine, posted online in late December.  Credit: News 12 Long Island

Dozens of Long Islanders turned out Tuesday to question Suffolk police officials about what role a school resource officer played in the deportation of a Huntington High School student.

The crowd of more than 50 people at the monthly community meeting at the Second Precinct in Huntingtonaired concerns about the handling of the student. The deportation came to light in a New York Times/ProPublica story The New York Times Magazine posted online in late December.

The student was arrested in June 2017 by federal immigration officials after he was questioned by the school resource officer and the principal about his alleged gang activities, according to the account. Identified only as "Alex," the boy was sent back to his native Honduras, the story said.

The police department "is satisfied that the proper procedures were followed,"  a public information officer said in an email. The Huntington School District is reviewing its relationship with the department.

At the community meeting, many said they believed the process had identified the student as a gang member without thoroughly investigating him.

"We feel he was innocent and denied due process," said Cheryl Lynn Blum, of Huntington Station.

The handling of the student has created a rift between the police and the school, many in the room said.

"The students feel [the officer] has ratted out their friend," said Sandy Saginaw of Huntington. "There needs to be some healing."

The school resource officer, Andrew Fiorillo, is one of five such officers in the Second Precinct, said Insp. Bill Scrima, the precinct's commanding officer.

Fiorillo has been in the schools for about 14 years and is well-liked and respected by students and teachers, Scrima said.

The school resource officer is still on the job but is no longer at Huntington High, he said.

Several residents asked Scrima to describe the process for identifying a student as a gang member and the level of communication between the police department and federal immigration officials.

A student, he said, is identified as a suspected gang member after evidence is collected that establishes possible ties between the student and a gang. The evidence could include writings, drawings or wearing the colors of a gang, as well as statements from students or school staff members, he said.

The student's name is entered into a police database, Scrima said. The student's parents may be notified if officials think they can play a role in turning around their child, he said.

"This article made the school look like a really awful, gang-infested place," he said. "That's ridiculous."

The story was written by a reporter with the nonprofit news organization ProPublica,  which did not respond to a request for comment Tuesday. Last week, in a statement, ProPublica president Richard Tofel  said, "With respect to the story, the school district has not indicated that there are any inaccuracies at all, and we are aware of none."

At a Huntington school board meeting Monday night, hundreds showed up to talk about the magazine account.

Huntington High Principal Brenden Cusack described the account as a misrepresentation of him and the school, saying, "The story as published is not the whole story."