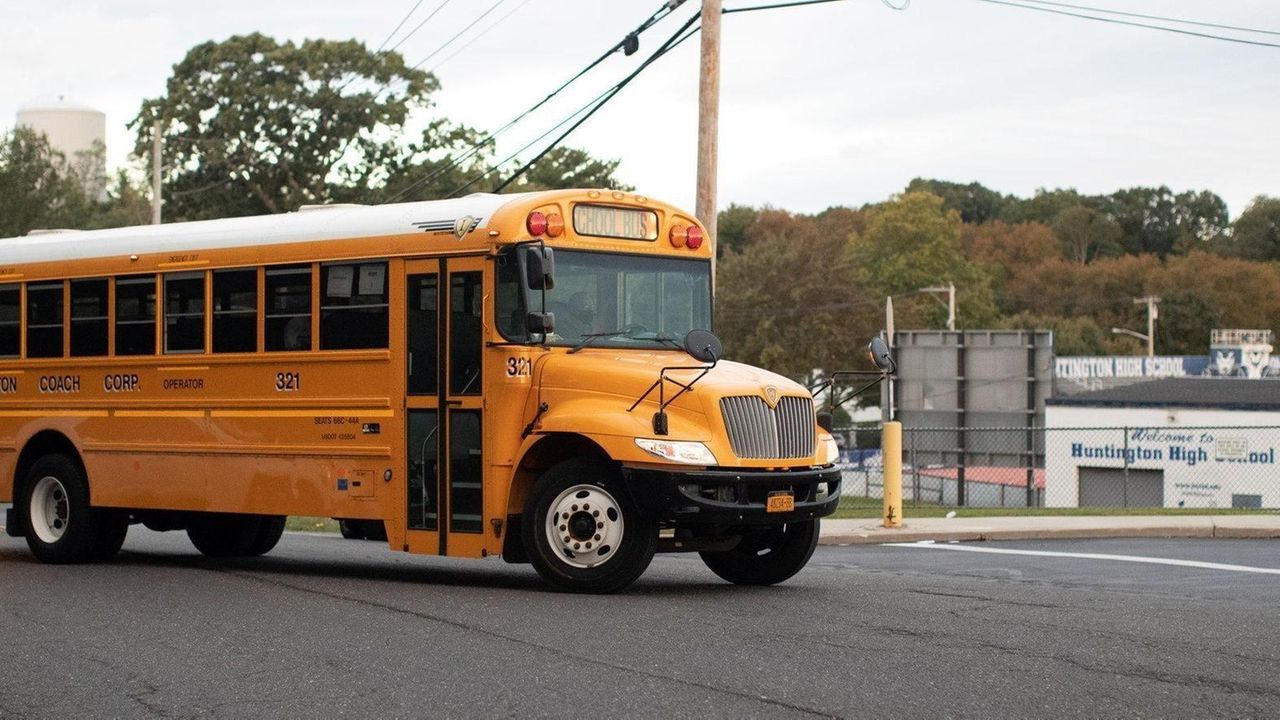 A day after many parents in the Huntington school district were notified that their children's' school bus service would be discontinued, Superintendent James Polansky released a statement saying the Huntington Coach Corp. will honor its contract to provide transportation, though families on dozens of routes can still expect delays. Newsday's Faith Jessie reports. Credit: Kendall Rodriguez; Photo Credit: Jenna Prada

Bus service for the Huntington school district will resume in full in the coming days, though families on dozens of routes can still expect delays Friday and at least early next week, school officials announced Thursday.

The development comes after the district's transportation service provider said earlier this week that it would stop busing the district's students due to a worker shortage.

Huntington school district officials said Thursday its transportation service provider, Huntington Coach Corp., will not stop providing busing services as it had told the district it would earlier this week.

Bus services will resume in full in the coming days. But families on dozens of routes can still expect delays Friday and at least early next week.

Parents who scrambled to get their children to school on time Thursday said they wanted the district to come up with a long-term plan to prevent such a crisis from happening again.

"I am relieved to advise you that we have now received assurances from Huntington Coach Corporation officials that they will, in fact, honor the terms and conditions associated with all existing contracts with the Huntington Union Free School District," Superintendent James Polansky wrote in a letter to families Thursday. "There will be no interruption of services."

Polansky said the delays that students had Thursday will carry into Friday but noted that the company was working to resolve the majority of them by the beginning of next week.

The extent of the delays was unclear; Polansky had estimated Wednesday that for Thursday, they would range from a few minutes to two hours. Some students arrived late at school Thursday, school officials said.

"Beyond tomorrow [Friday], the district will communicate with families if/when delays are imminent on a given day," he wrote.

Huntington Coach Corp. did not respond to multiple requests for comment Thursday.

The announcement came a day after Polansky, in a letter, told families that Huntington Coach would cut services starting Thursday and stop providing busing services in the district altogether after Oct. 8.

Huntington Coach's vice president Brendan Clifford issued a statement Wednesday citing the national driver shortage and state COVID-19 safety mandates as reasons for pulling out of the three-year contract it signed with the district in April, a position the company apparently has since reversed.

Clifford didn’t respond to a question Thursday on why the company originally chose to pull services for Huntington schools — a decision it said wouldn't affect the other districts it serves. Huntington Coach provides services to several other districts, including Syosset and Manhasset, according to its website.

The service cut announcement led to confusion and outrage as frustrated parents scrambled to come up with alternative plans to get their children to school on time.

Some organized carpooling. Many rearranged their schedule to drive their children to school so they didn’t lose instruction time.

Parents breathed a sigh of relief Thursday when they heard the new development but said they remain concerned over the long-term stability of the children’s bus services.

"The trust of the community and the students has been violated," said Daniel Akridge, who drove his daughter to Our Lady of Mercy Academy in Syosset Thursday after learning she would be 90 minutes late for school if she took the bus.

A local district is responsible to transport students who live in the district but attend private schools outside the district.

"Who goes to say that something like this isn't going to come up in a matter of moment's notice in the future?" Akridge said.

Akridge and other parents said they want to see the district work on a contingency plan and a long-term strategy.

"It's the responsibility, at this point, of the district to realize that we are beholden to a monopoly," said Ed Milner, referring to the fact that Huntington Coach was the only company that responded to the district’s request for bids this year. "We have to look at ulterior sources in the future to make sure we're not put in this type of a pigeonhole where we don't have any options."

Milner, a Huntington father of three, said he was glad a resolution was reached for now but wished it happened sooner.

"If the bus company had only had the conversation that happened beforehand, this all could have been avoided, and I wouldn't be on Northern State Parkway right now in traffic," Milner said as he was driving home after picking up his son from Kellenberg Memorial High School in Uniondale.

For Erin O’Brien, who woke up at 5:15 a.m. — an hour earlier than usual — Thursday to drive her three daughters to the Latin School, a division of Kellenberg Memorial High School, the superintendent’s letter still left her feeling unsettled.

"I think they're moving in the right direction. So that's comforting," she said. But "it's not like it's resolving everything. It kind of left things out there. That makes me a little nervous. There's no finality to it."

O’Brien said she also didn’t get a notification from the school district Wednesday, though the superintendent said affected families were notified.

"The letter says that they will keep us posted when there are delays," she said. "I mean, it wasn't a complete success. They didn’t reach everybody."

Akridge said he wishes to see more transparency and communication from school officials as he heard about the service cut from his daughter, who learned about it from her bus driver Wednesday morning.

"It's not the kids’ problem," he said. "These kids have enough going on in their lives, especially coming off of COVID, where they shouldn't have to be concerned about their bus drivers being the ones to first inform them of them not potentially having a way of being able to get to and from school."

Delays expected on Huntington school bus routes after service cutsHuntington schools Superintendent James Polansky said late Wednesday that he was expecting delays from a few minutes to two hours along some district bus routes Thursday after the district's contractor said it would cut transportation services. LI school bus companies offer incentives to address driver shortagedefault Districts off to bumpy start due to shortage of bus driversIn recent weeks, school districts have combined routes, and bus companies have stepped up their recruitment efforts by flashing sign-on bonuses in the thousands of dollars to lure new drivers.

How the shooting of NYPD officers unfolded
Wounded cop 'fighting for his life' after fellow NYPD officer shot dead
Official: One NYPD officer shot dead, one wounded in NYC
COVID cases continue to decline on LI — but what about risk?
Lubin Hunter, Shinnecock elder, activist, WWII veteran, dies at 104
Forecast: Below freezing temps for Saturday, Sunday
Didn’t find what you were looking for?