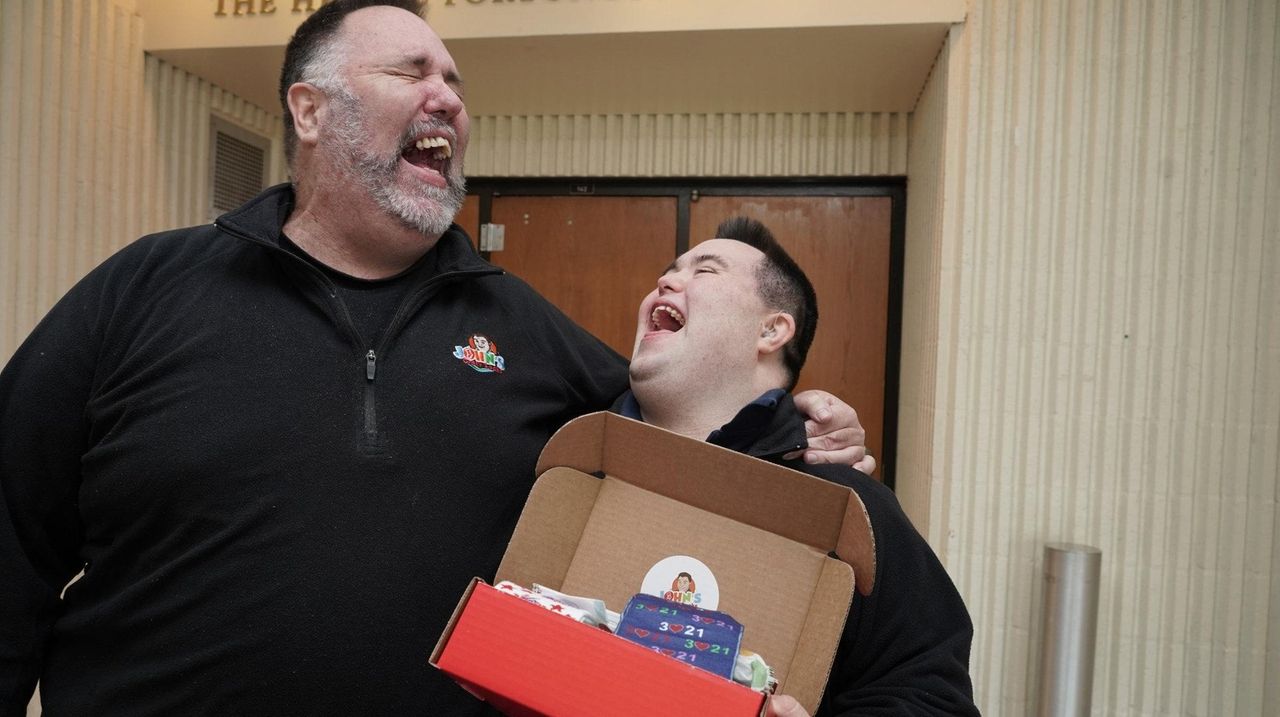 Mark and John Cronin, co-founders of John's Crazy Socks, spoke to business students at Hofstra University on Friday about the ups and downs of starting and growing a company.  Credit: Debbie Egan-Chin

John and Mark Cronin were walking together in lower Manhattan on Sunday night when a speeding SUV hit the brakes and stopped only feet from them.

The driver leapt from the vehicle and screamed at John: "aren't you the crazy sock guy?" before running to hug John, the now-familiar face of one of Long Island's most successful, and unlikely, apparel entrepreneurs.

Fame and success have come fast for the father-son duo, who formed John’s Crazy Socks in 2016 with little more than a Facebook page and an idea to sell fun and colorful socks while spreading happiness to customers.

On Friday, Mark Cronin and his son, who has Down syndrome, detailed their story to nearly 150 students at Hofstra University Business School.

It's a journey that has taken the duo from a small office in Huntington, where they hand-delivered socks to neighbors until after dark, to a growing force in the apparel industry. By the end of 2019, the Melville-based company will complete the sale of one million pairs of socks and is expected to clear a total of $10 million in revenue since its launch, Mark Cronin said.

"My advice is follow your heart, follow your dream and show what you can do," said John Cronin, who has become a viral celebrity for his online videos, which often feature his dance moves.

The company's message is more than just profit.

The firm follows a social enterprise business model that seeks to demonstrate the capabilities of people with disabilities. The company, which sells 2,300 different kinds of socks, donates 5% of its revenue to the Special Olympics, and of its 26 full-time employees — the staff will grow to about 70 during the Christmas holiday — 70% have differing abilities.

"People with differing abilities can be great employees," Mark Cronin said. "They want to be there and are committed. They are talented and do good work. The message is focus on what people can do and not on what they can't."

John's Crazy Socks has faced ups and downs. In the summer of 2017, the company ran out of money and was forced to lay off all its staff.

But the Cronins clawed back, growing the business, in part, through aggressive social media marketing with John as the face of the company.

As the business has grown, father and son have been invited to testify before Congress, the United Nations and business leaders across the country, Mexico and Canada.

In June, the Cronins won the prestigious EY Entrepreneur of the Year award for the New York region. Next week they will travel to California to learn if they will win the national competition.

Even as the company has grown, it continues to focus on the personal touch. Each shipment of socks includes a thank-you note signed by John, a sticker with the faces of the employees that packed the materials and a small bag of chocolates.

"It's not rocket science," Mark Cronin said. "It's about knowing what matters and paying attention."

Lutisha Vickerie-Dearman, assistant professor of entrepreneurship and management at Hofstra's Business School, said she invited local business owners to address her class about twice a month. The Cronins, she said, were an obvious choice.

"They get to present a different side of entrepreneurship to our students," she said. "We get to see a father-son team who has been able to bring a pretty unique and fun idea into the market."

Sophomore Lauren DeCarlo, a marketing major at Hofstra, said she planned to use the Cronins' business model as she looked to expand her podcast, which she produced with classmates, about campus life at the university.

"It's incredible to see how literally the smallest idea can be turned into such an amazing company," DeCarlo said.

Mark Cronin advised the budding entrepreneurs to follow their hearts as they pursued their dream but not to be afraid to fail.

"Not every idea is going to be a good idea," he said. "John logged onto something that he knew and loved. And there's a chance that if there's something you care about deeply and know about deeply somebody else will care too."