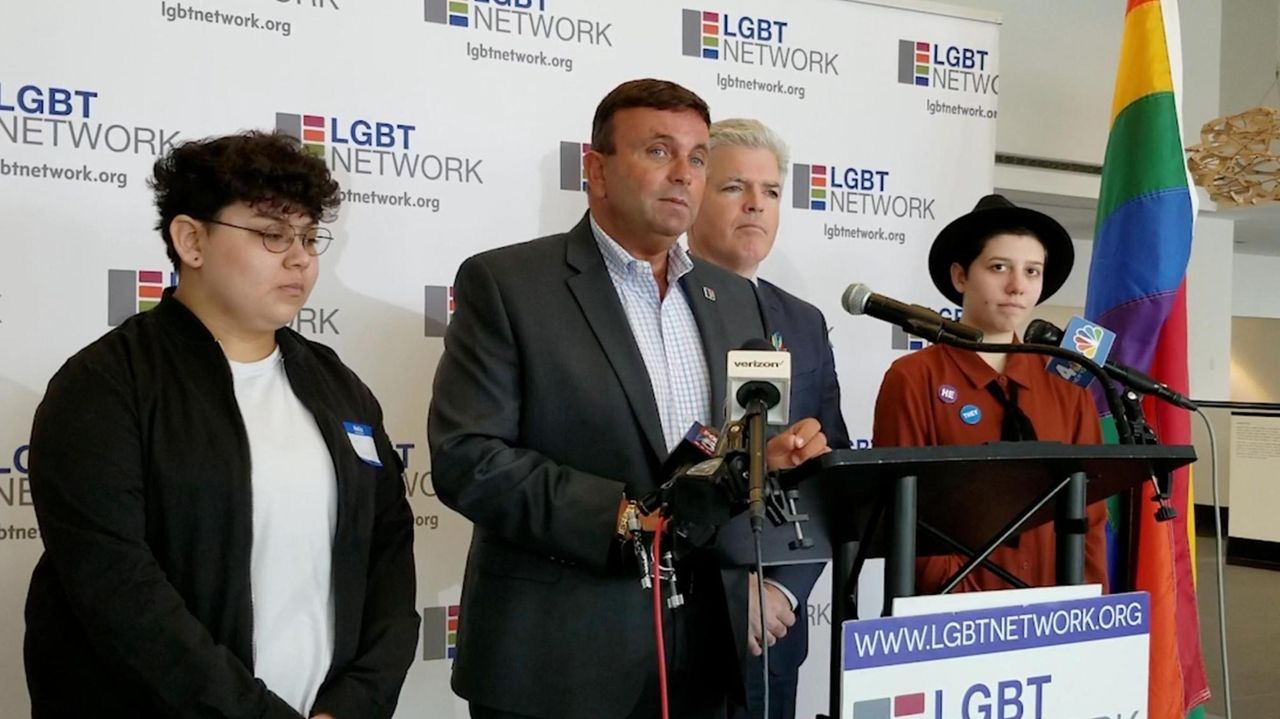 On Tuesday, the LGBT Network launched an anti-bullying initiative at its 2019 annual conference on Long Island, which the organization said drew more than 600 students from the region to the Charles B. Wang Center at Stony Brook University. Credit: James Carbone

The LGBT Network, alarmed by a reported rise in hate crimes nationally, is strengthening its anti-bullying efforts and will offer after-school programs to support LGBT students in graduating high school and preparing for college and careers, officials said Tuesday at the advocacy group's annual Long Island youth conference.

More than 600 students gathered for the one-day event, held at Stony Brook University, where the "Pathways to Pride" initiative was announced.

David Kilmnick, the LGBT Network's president and chief executive, said the new program will provide tutoring, training in life skills and with handling financial matters, internships, and summer jobs assistance for high school students. He said it is launching immediately.

The network noted that an increase in bullying against lesbian, gay, bisexual and transgender individuals has been documented by the Southern Poverty Law Center, the Alabama-based organization that identifies hate groups and tracks bias crimes.

The program will be available to students in Nassau and Suffolk counties either at the LGBT Network's centers or through the Gay Straight Alliance organizations that are at many schools.

Pathways to Pride will include coaching, guidance and dropout prevention measures, as well as a range of programs for graduates to help LGBT youth find employment, Kilmnick said.

Logan Malfer, 17, a senior at Connetquot High School who is president of the school's Gay Straight Alliance, said during the news conference that the new effort will benefit LGBT individuals, including those who are looking for work and their prospective employers.

"I have so many friends who work and who are mis-gendered on a daily basis," Malfer said. "You want your life to be a safe space."

Funding is coming from a $300,000 state grant, and the LGBT Network has more than 150 businesses that are part of its "Partners in Pride" that Kilmnick said he will tap.

Kilmnick was joined Tuesday by Suffolk County Executive Steve Bellone, who said the program will help the community move forward, noting "there is still so much work to be done."

The LGBT Network cited statistics from the Southern Poverty Law Center, which reported last month that the number of hate groups in the United States had grown by 30 percent during 2018. The law center also said FBI statistics show that hate crimes increased by 30 percent in the three-year period ending in 2017.

According to recent statistics provided by the network, one in three LGBT students will skip school out of fear of bullying throughout their educational careers and more than 40 percent of LGBT youth believe that their environments, at school and at home, are not accepting of LGBT people.

Bullying started in the third grade for Brentwood High School sophomore Oliver Chaves, who also spoke at the news conference.

"I was so isolated from everyone I knew," said Chaves, 15, president of the school's Gay Straight Alliance. "I don't want anyone else to go through what I went through."

"They are going to go back and into their individual schools and individual communities to make sure every single student is safe," Kilmnick said.