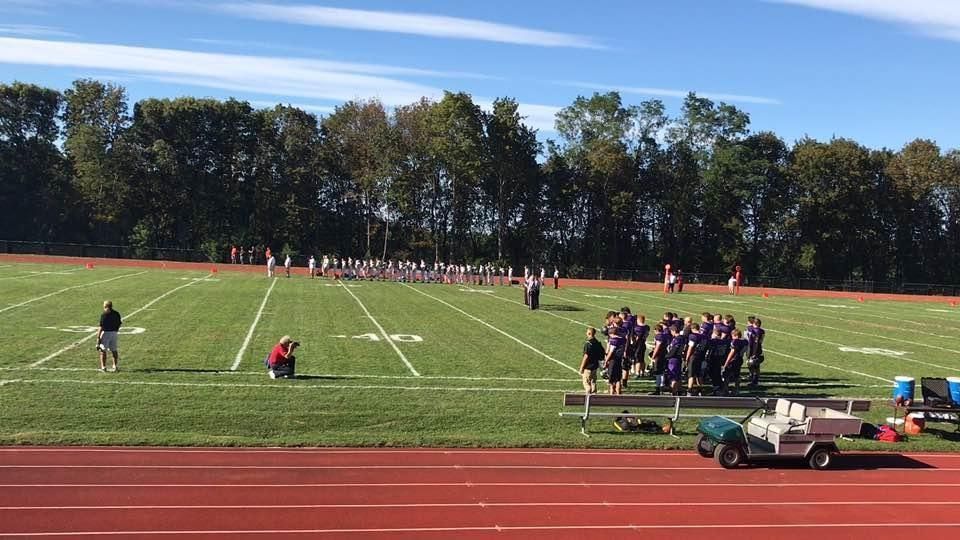 On Sept. 28, 2017, after the Diocese of Rockville Centre issued a directive to its three high schools that students and spectators cannot kneel or otherwise protest during the playing of the national anthem, players from McGann-Mercy and Port Jefferson stood for "The Star-Spangled Banner" before Thursday's football game in Riverhead. (Credit: Newsday / Sal Cacciatore)

The Diocese of Rockville Centre has issued a directive to its three high schools that students and spectators cannot kneel or otherwise protest during the playing of the national anthem before games and at other school events, and that doing so could result in serious disciplinary action.

The diocese sent the directive to the high schools this week informing them of its long-standing policy on protests during the anthem, diocesan spokesman Sean Dolan said Thursday.

Bishop John Barres instructed that the statement be sent by the diocese’s Education Department, Dolan said. Barres was not available for comment.

“This is a reminder that all student-athletes and spectators are expected to stand during the playing of the National Anthem at school sporting events, without any gestures of demonstration or protest,” the directive said. “This is long-standing school policy and applies equally to all participants and audiences at all school events, including those that are not sporting; for example, concerts and plays.

LI HS football players stand for national anthem On Sept. 28, 2017, after the Diocese of Rockville Centre issued a directive to its three high schools that students and spectators cannot kneel or otherwise protest during the playing of the national anthem, players from McGann-Mercy and Port Jefferson stood for "The Star-Spangled Banner" before Thursday's football game in Riverhead. (Credit: Newsday / Sal Cacciatore)

“We ask our students also to recognize that failure to abide by this policy may result in serious disciplinary action,” it said.

The directive was sent to the three diocesan high schools: St. John the Baptist in West Islip, Holy Trinity in Hicksville and Bishop McGann-Mercy in Riverhead.

Dolan said any possible discipline “will be handled on a case-by-case basis, depending upon the circumstances, by the school according to their means of discipline.”

The issue has provoked a huge national debate as scores of NFL players have knelt during the national anthem before games to protest police killings of unarmed black people and other racial and social injustices. The latest actions were in response to President Donald Trump, who last week called for players who protest during the anthem to be “fired” and sent a succession of tweets castigating those who do.

The first diocesan football game played since the directive was issued was Thursday afternoon, with McGann-Mercy facing off against Port Jefferson’s Earl L. Vandermeulen High School, a public school.

All of the McGann-Mercy and Port Jefferson players — along with all spectators — stood during the national anthem. Many fans said they supported the diocese’s stance.

“There’s no place on the athletic field for a protest,” said Jack Lillywhite, an U.S. Air Force veteran from Southampton whose son plays for McGann-Mercy. “You want to protest, go out there and hit the guy harder than he hits you. There’s no place for it, not when that flag is flying.”

The diocese did not send the directive to the other seven Catholic high schools on Long Island. Those schools are not run by the diocese, but by religious orders such as the Franciscan and Marianist brothers, or by local parishes.

With public attention focused on the issue, the bishop thought it was “a good opportunity to remind our student-athletes and spectators that we have a long-standing policy as it relates to the national anthem,” Dolan said in an interview Thursday.

“Both the student-athletes and the spectators . . . are expected to stand during the playing of the national anthem at school sporting events without any gestures or demonstrations or protests,” Dolan said.

“We respect the right of students and spectators to have their political and social beliefs, certainly, and to express those beliefs at appropriate times. But it’s just not appropriate to draw attention to yourself during the national anthem, which really honors the sacrifices that others have made,” he said.

“If someone wants to demonstrate or protest political or social beliefs, obviously they have the First Amendment right to do so, but there is an appropriate time and place for that,” Dolan said.

The diocese hopes spectators will abide by the policy. However, if they don’t, “sometimes fan disruptions are handled through some sort of team penalty,” he said.

The directive was not sent to diocesan elementary schools because they generally do not field sports teams, Dolan said. Rather, church sports teams are run through the Catholic Youth Organization, or CYO.

A spokeswoman for St. Anthony’s High School in South Huntington, which is run by the Franciscan brothers, said, “We have not officially issued anything as of this time” on the kneeling issue.

Christina Buehler said the principal, Brother Gary Cregan, believes the school is “attuned to the national situation and handling our adolescents in an appropriate educational manner.”

St. Anthony’s has had “little or no issues” regarding the national debate, she said, and has not “felt a need to address the topic at this time.”

“Individual teachers in social studies and theology classes, when appropriate, have raised issues of national concern with their students, so that this and other international issues regularly become a teachable moment,” Buehler said.

The other Catholic high schools did not respond to requests for comment.

A spokesman for the state Education Department said public schools generally cannot prevent students from expressing their opinions on controversial issues while on school premises.

The book “School Law,” which is published jointly by the New York State School Boards Association and the New York State Bar Association, cites prior case law in stating, “According to the United States Supreme Court, it is inevitable that during the course of a school day students will engage in personal intercommunication with others. Such communications ‘may not be confined to the expression of those sentiments that are officially approved’ be it in the classroom, the school cafeteria or other school campus areas.”