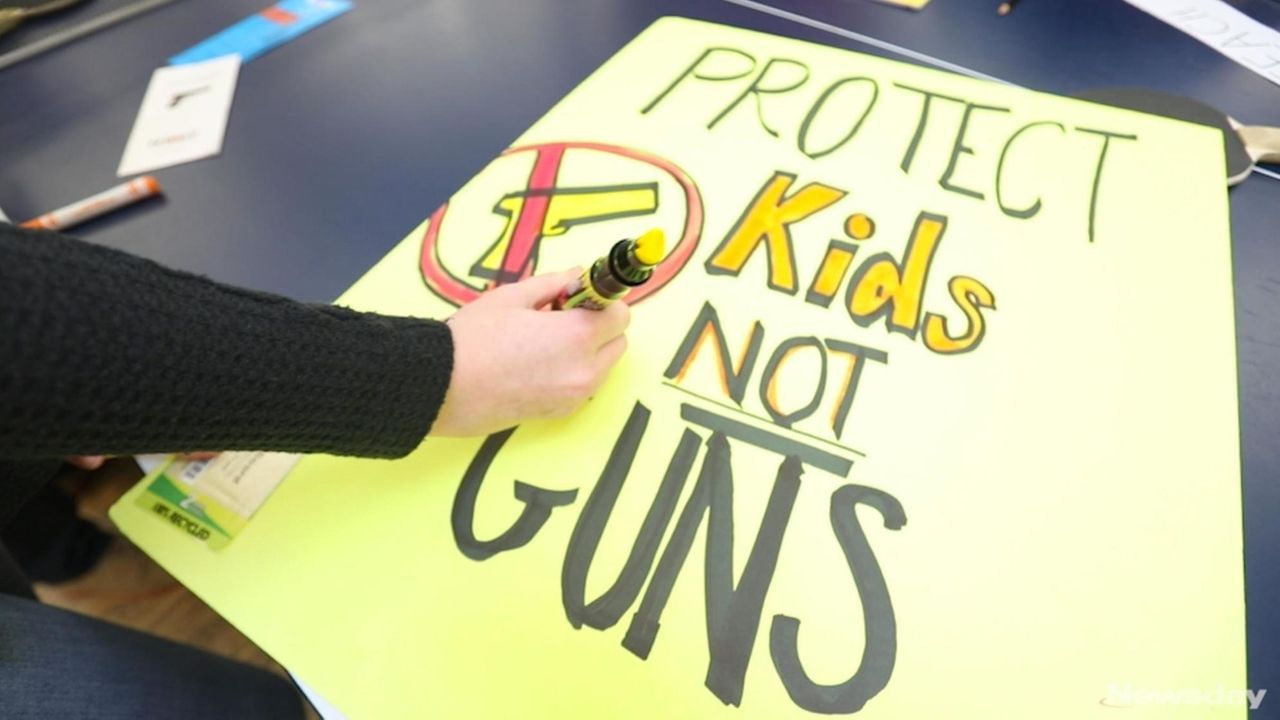 In Huntington, organizers of a rally set for Heckscher Park said more than 1,400 students from more than 60 schools have expressed interest in attending, with 2,500 indicating interest via the group's Facebook page. Credit: Jessica Rotkiewicz

Deborah Fossett of Sea Cliff texted her 17-year-old daughter, Danielle, at 1:06 p.m. on March 5: “What’s going on at the school?” The response came: “There was a threat and we were on lockdown for an hourish, now we’re on lockout so nobody can leave.”

What kind of threat, she asked, and the answer came: “I think someone threatened to shoot up the school.”

Someone, somewhere, had posted a threat on Snapchat to shoot up a school at 12:27 p.m. that Monday so North Shore High School in Glen Head initiated a lockdown and lockout. No shooting occurred, nothing made the news. Just another lockdown in another American high school.

The toll of repeated threats and shootings has fueled the response to calls for action from survivors of this country’s most recent mass school shooting, in which a troubled ex-student took 17 lives with an assault-style weapon on Valentine’s Day. A group of students there, at Marjory Stoneman Douglas High School in suburban Parkland, Florida, quickly emerged as impassioned voices for a generation raised under the shadow of gun violence. They have organized a mass march in Washington, D.C., for Saturday, and the Fossetts will be there.

LI students mobilize in the shadow of gun violence In Huntington, organizers of a rally set for Heckscher Park said more than 1,400 students from more than 60 schools have expressed interest in attending, with 2,500 indicating interest via the group's Facebook page. Credit: Jessica Rotkiewicz

They will board a bus leaving from North Shore High School heading for the March for Our Lives in Washington to demand school safety and tighter gun regulation. Another busload will leave from Southold. Satellite marches and rallies are planned across Long Island and in every state.

“I just hope to get more awareness and information about school safety for our generation,” said Danielle Fossett, about her expectations for the march. “But it’s more about what those who have the power get from seeing a mass amount of students, the message we send.”

Her classmate Blake Mandell, 17, of Roslyn Harbor, added, “There’s strength in numbers. It’s not inherently partisan, it’s just about making sure nothing like this happens again.”

The marches follow Wednesday’s school walkouts and in-school events, which lasted 17 minutes to memorialize the 17 Parkland victims. Some students are planning events for April 20, the 19th anniversary of the Columbine, Colorado, high school shootings.

Students are not the only ones galvanized by the latest mass shooting. The Nassau and Suffolk chapters of Moms Demand Action for Gun Sense in America both scheduled additional new member meetings after the Parkland shooting in response to a spike in inquiries. The organization, now affiliated with the national group Everytown, formed five years ago after the mass shooting at the Sandy Hook Elementary School in Newtown, Connecticut.

On March 12, more than 60 men and women filled a community room at Harborfields Public Library in Greenlawn for Suffolk chapter president Jeff Keister’s presentation on how to take action for gun regulation, a month after a similar meeting attracted about a dozen, he said.

“I’ve been following them on Facebook for a while and I wanted to get involved,” said Cindy Grimm of Huntington, who is assistant director at the Whaling Museum in Cold Spring Harbor and came to the meeting because she found it “a ridiculous situation” that so little had been done in the more than five years since Sandy Hook. “No one is against the Second Amendment or is trying to take away guns. Why can’t we start the conversation and see what the results will be?”

Another new member was Stephanie Adams of Northport, who said her children, age 5 and 2, were too young to have experienced active shooter drills, “but I see them posted on Facebook and it makes my stomach drop and I want to stop this from happening to any other kids.”

Nassau County’s chapter began organizing “in earnest” last fall, said Laura Burns of Rockville Centre, a freelance young adult fiction writer and mother of three who is active in the state organization. The group also saw a spike in interest between its first new members meeting in January and a second one on March 1 when nearly 70 people attended, she said.

“It’s been surprising to me, the sustained level of interest since the Parkland shooting. It’s not dying down and I credit the kids from Parkland for that. We keep getting more requests every day from people wanting to help us and I’m hopeful this is the tipping point,” Burns said.

Not every student, however, agrees with an agenda to more tightly regulate guns. Matt Baron, a senior at Northport High School, joined the walkout at his school only when convinced its mission was to honor those slain at Parkland rather than support gun regulation, which he opposes.

The Parkland students organizing the March for Our Lives march in D.C. — Emma Gonzalez, David Hogg, Cameron Kasky, Sarah Chadwick and others — are calling for a ban on civilian use of what they call assault-type weapons such as the AR-15, a semi-automatic rifle. But Baron looks to another student from Parkland, a conservative who favors arming school staff to confront potential school shooters and who met in the Oval Office at the White House with President Donald Trump and Melania Trump.

“I cannot support the March for Our Lives because they support a ban on assault weapons and high-capacity magazines, proposals I object to on both philosophical and factual grounds,” said Baron. “Parkland student Kyle Kashuv has suggested a ‘March for Our Rights,’ which I would probably support.”

Thousands of Long Island students could be taking part in March for Our Lives events, either traveling by bus or with parents to Washington, D.C., or to New York City or local events. In Huntington, organizers of a rally set for Heckscher Park said more than 1,400 students from more than 60 schools have expressed interest in attending, with 2,500 indicating interest via the group’s Facebook page. Interest spread rapidly via social media, said organizer Avalon Fenster, 16, of Dix Hills, a student at The Stony Brook School, whose first request at a recent meeting of young volunteers was for everyone to immediately post about it on their Instagram accounts, using its hashtag @marchforourlives.li.

“This is a nonpartisan issue: This is for our lives,” she said.

The same social media that have helped organize the new student movement against gun violence is heightening the sense of danger, according to Theresa Walter of Greenlawn, a teacher at Great Neck North High School and mother of three, who came to lend support at the Huntington volunteer meeting.

“Any kind of post that can be interpreted as a threat is causing panic among kids and parents and staff,” she said. “People are at a heightened state of anxiety for sure. I talk to my neighbors, and we’re all scared.”

James Connor, a 15-year-old ninth-grader at Northport High School, and his mother, Amy, said they will be marching in Washington. When he saw the photos from the Parkland shooting, he said, he felt the school was similar to his and “that could have happened here just as easily. . . . Yeah, I’m mad at the lawmakers down in Washington. We’ve been calling on people to get rid of the ability to get guns so easily and no one has done anything.”

Student at protest: ‘We have a voice’Scenes from around Long Island as students participated in events honoring the victims of the Parkland shooting or protested gun violence. What do you think about LI school walkouts for Parkland?Students across Long Island — and the country — might walk out of their schools today in the wake of the recent school shooting in Florida. Do you think students should face disciplinary action if they walk out without their district's support?