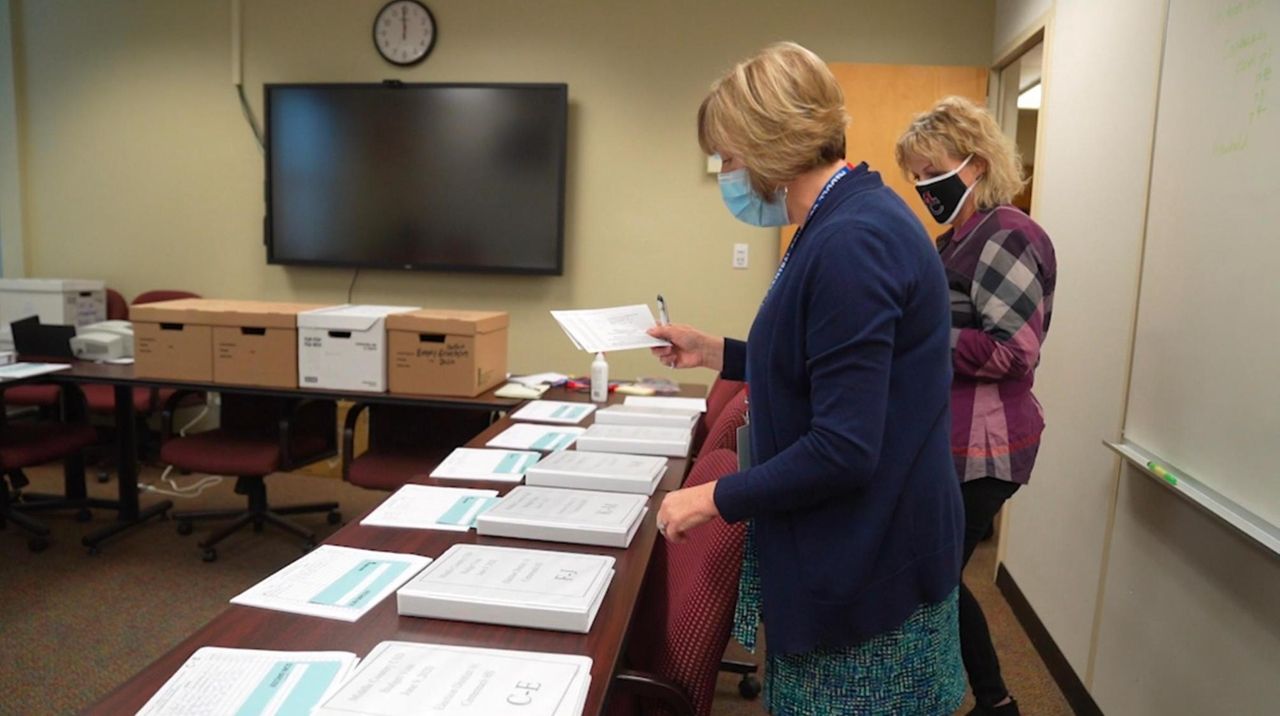 This year's school budget vote process is unlike any other after the switch was made to absentee ballots on May 1 by Gov. Andrew M. Cuomo to protect public health during the COVID-19 pandemic.  Credit: Randee Daddona

Envelopes containing ballots for school elections have been delivered to some 2 million voters on Long Island, dwarfing any past moves toward mail-in voting in the state.

The switch to absentee ballots was ordered May 1 by Gov. Andrew M. Cuomo, to protect public health during the COVID-19 pandemic.

Preparations were rushed, and produced predictable glitches. On Friday, the governor said he expected to decide by Sunday whether to allow districts to again postpone votes on budgets and board candidates. Voting, originally scheduled for May 19, was pushed back to Tuesday before the latest controversy.

The new school-elections date is June 16.

This season, the great majority of voters in the region have received voting-by-mail ballots automatically. Voting on the Island will involve more than $13 billion in proposed school spending, along with hundreds of contested school board seats. District-by-district details appear in this Voters Guide.

"Monumental" and "phenomenal" are some of the milder terms used to describe the logistical headaches involved in this year's balloting. Robert Lowry, a deputy director of the New York State Council of School Superintendents, observed that mailings by districts to voters involved three envelopes in all — one on the outside addressed to the voter, another on the inside pre-stamped and pre-addressed for the return, and a third signed by the voter and enclosing the ballot itself.

That adds up to 21 million envelopes for 7 million voters statewide, Lowry noted.

"It has been a challenge," he said.

"It's certainly an experiment," said Michael Dawidziak, a Sayville-based political consultant and pollster who has worked for both Republicans and Democrats. "If a significantly larger number of voters participate this time, it's going to be difficult making an argument against it in the future."

Universal voting-by-mail, while new to this state, is common in some other areas. Five states altogether — Colorado, Hawaii, Oregon, Utah and Washington — already send mail-in ballots to all registered voters, with or without a request.

Oregon has done this the longest time, starting in the year 2000. Nationwide, 26% of all ballots were mailed in 2018, and 28 states provide ballots by mail without requiring a specific reason such as illness, according to the Brennan Center for Justice, a nonpartisan think tank affiliated with New York University.

"This is new for New York, and it's my expectation that this will increase participation in general," said Jay Jacobs, the state's Democratic chairman as well as Nassau County's party leader.

John Ryan, counsel to the Republican commissioner on Nassau's Board of Elections, said he understands the rationale for balloting by mail during a health crisis, but favors voting in person when it's safe.

"I think it's a better way to prevent fraud than voting by mail," he said.

States such as Washington have adopted mail-in voting gradually, starting with local elections, then moving up to state and federal levels. New York's shift was more abrupt. School district clerks are feeling the pressure as they brace for elections, and village clerks are next in line with elections scheduled in September.

"This has been a little bit of a nightmare for us," said Stephanie Larkin, clerk for the sprawling Middle Country system in central Brookhaven Town.

Middle Country mailed out ballots to just under 39,000 registered voters May 28, Larkin said. In a more typical year, the district would have handled about 300 absentee voters, she added. Like many other districts, Middle Country has arranged with election inspectors to work an extra day, if necessary, to handle any overflow of ballots.

One lingering concern among school officials is that residents who don't normally vote in district elections, but have recently lost jobs, might use their ballots to express frustration and vote "no." The countervailing argument is that districts generally are holding next year's projected tax increases to a little over 2%, and that voters generally have supported such increases in the past.

"One thing we've learned through COVID is that nothing is predictable in this world," said Lorna Lewis, superintendent of Plainview-Old Bethpage schools. Lewis is also immediate past president of the New York State Council of School Superintendents.

Effects of voting by mail are likely to be subtle rather than dramatic, some researchers have found. Patricia Southwell, a political scientist at the University of Oregon, studied the impact of mailed balloting in that state between 1980 and 2016. She reported that such voting resulted in no significant fraud, but also that increases in voter participation tended to be modest.

Writing in the Atlantic magazine, Southwell suggested that switching to mailed votes could be crucial during a pandemic, but didn't have to be permanent. Some on the Island would agree.

James Montalto, a spokesman for the William Floyd district in southern Brookhaven, said his system last week mailed out more than 29,000 absentee ballots, while also arranging for election inspectors to serve an extra day if necessary. At the same time, he said, the district would like to return to in-person voting as soon as possible.

"We hope that mass absentee ballot voting is a one-time thing due to the pandemic," Montalto said. "Of course, there's a place for absentee balloting. But generally, people should exercise their privilege to vote in person. It's just part of our democracy."

LI school elections: See candidates, propositions and budgetsSchool district residents are voting by absentee ballot on budgets and members of their local boards for 2020-2021. See what's at stake in your district. FAQ school voters guide 2020FAQ Q: What school year will this budget cover? A: The 2020-21 fiscal school year, ...

Sikh center vandalized near mass shooting anniversary
At LIU and other colleges, COVID vaccination mandates cover employees, too
1:12
Sini: Alleged drug ring operated as 'one-stop-shop drug delivery service'
1:37
'A weight and a blessing,' says daughter who takes over the reins at LI church
2:12
Cases again near 600 on LI, hospitalizations up, NY figures show
Judge: Spota, McPartland face 57 to 71 months under federal sentencing guidelines
Didn’t find what you were looking for?