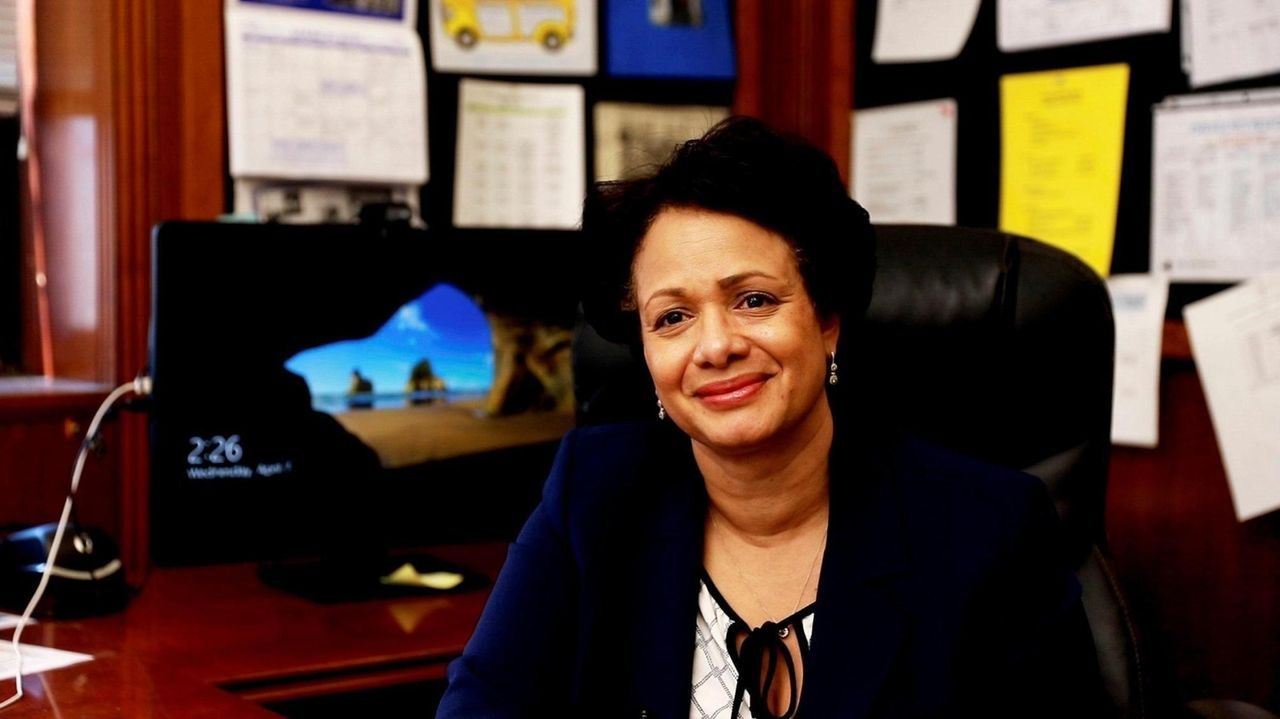 Constance Evelyn, superintendent of the Valley Stream No.13 School District, talks bout what the new increase in funding may mean for her school district.  Credit: Reece T. Williams

Long Island schools have gained a $400 million-plus windfall of state financial aid for the 2021-22 fiscal year, with local officials saying that the record funding will go a long way in easing the academic impact of the COVID-19 pandemic.

Total dollar assistance to public pre-K-12 education in Nassau and Suffolk counties is due to rise by 13% next year, to more than $3.6 billion. Figures were provided by Albany lawmakers, who on Wednesday approved a statewide budget and school-aid package.

The package provides double-digit aid increases to scores of districts across the region, including a 29.19% raise for Glen Cove, 29.18% for South Huntington, 20.24% for Hempstead and 16.44% for Brentwood. The raises include nearly $32 million for new and expanded public preschool programs, capable of serving 5,200 youngsters in 64 districts Islandwide.

A flood of new school money, provided through a combination of higher state taxation and federal stimulus funding, was in marked contrast to warnings of potential cutbacks issued just months ago. Aides to Gov. Andrew M. Cuomo had said they might have to withhold 20% of aid to districts due to uncertain cash flow.

How much aid will your school district get?

"This is a record investment in our education system," said State Sen. Todd Kaminsky of Long Beach, the senior Democrat in the Island's delegation. "After the year that parents, teachers and students have suffered through, it's the least we could do to make sure students are on the pathway to success and to achieving their potential."

"Instead of seeing reduced state aid, as we have feared since January, schools will witness a $3 billion increase, the largest in the state's history," Cechnicki said.

At the regional level, Joseph Dragone, a school-business official with more than 50 years' experience in education, agreed that the latest funding boost was unprecedented. He added that the distribution of cash was generous for districts both affluent and poor.

"I don't think you're going to find anybody in the Long Island educational community who looks at this and says it isn't enough," said Dragone, who serves as a representative to the Long Island Education Coalition, an advocacy group.

Other local school administrators said the extra money would help curb the need for property taxation, while providing after-school and summer classes for students struggling to catch up with lessons. Moreover, these officials said, expanded free preschool services would provide a break for parents with growing families.

"It sends a message to families in New York State that we get it," Evelyn said of preschool expansion. "Access to early learning makes the critical difference."

Wantagh's superintendent, John McNamara, said the school board would meet at 8 p.m. Thursday and discuss the possibility of a tax-levy increase lower than the 4.88% hike considered previously. One option would be a 3.8% increase, he added.

McNamara credited the state's recent provision of extra aid for his district as helping "ease the burden of the tax on our community."

A 3.8% raise would still exceed the district's tight tax cap, imposed by state law, and require approval by at least 60% of voters.

At the state level, some skeptics questioned the need to raise taxes on high earners and corporations, at the same time New York was receiving billions in federal stimulus money. The Citizens Budget Commission, a nonpartisan civic group based in Manhattan, contended that using federal funds on top of state revenues could inflate spending to the point where it could not be sustained in the future.

Supporters of the state's new taxation said this provides a constant stream of revenue that will be available even if federal funding dries up in 2023-24, as projected. State lawmakers have pledged to continue expanding their biggest source of school money, known as foundation aid, for the next three years, giving local schools some assurance of extended support.

That's an important message for superintendents, who had warned until recently that cessation of federal relief could confront their districts with a fiscal "cliff."

"It gives us some breathing room," said Bill Heidenreich, superintendent of the Valley Stream Central High School district. "It definitely makes me feel more confident in our ability to sustain quality education into the future."

Heidenreich also serves as president of the Nassau County Council of School Superintendents.

"Clearly, we are grateful to the legislature for coming through, especially at a time when schools need to be at their best to make up for learning losses that may have occurred during the pandemic," said Masera, who is also the superintendent of Center Moriches schools.

NYS to still fully tax jobless benefitsThe 2021-22 NYS budget makes no change in the taxable status of unemployment benefits despite the federal tax exemption on the first $10,200 received last year. Assembly completes final passage of state budgetThe budget calls for an $18 billion spending increase fueled by generous federal aid and new taxes on corporations and the wealthy. How much aid will your school district get?The State Legislature has approved a plan for more than $3.6 billion in aid to public school districts on Long Island.