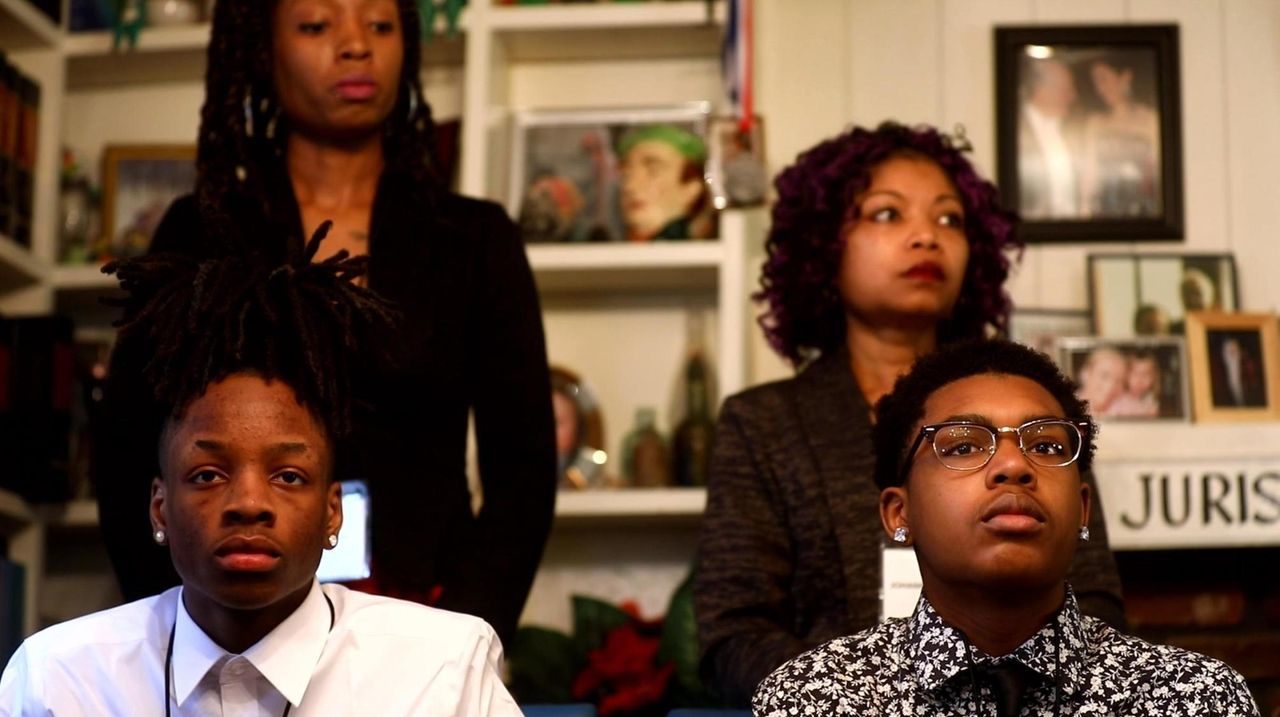 The parents of four black high school students plan to file a $12 million lawsuit against the Longwood Central School District after a high school teacher created a slideshow that featured a picture of a gorilla, followed by an image of the boys, with a caption that was "outrageously offensive," the students' lawyer said. Credit: Newsday / Cecilia Dowd, Chris Ware

The parents of four black high school students have given notice they intend to file a federal civil rights suit against the Longwood Central School District after a science teacher created a slideshow that featured a picture of an ape, followed by an image of the boys, with the captions "Monkey See" and "Monkey Do."

A notice of claim — a precursor to the planned $12 million lawsuit — was served on the school district Wednesday. The notice alleges the administration of Longwood High School threatened to suspend one of the students after he shot a video of the PowerPoint presentation on his phone and then shared it on social media.

Attorney John Ray, who represents the four students, said the photos compiled and displayed in a PowerPoint presentation in the classroom  by science teacher Edward Heinrichs were "outrageously offensive." Ray said the images "insulted and humiliated" the young men, who range in age from 16 to 18, and are all honors students at the school.

"This is not just a case of racism," Ray said at a news conference in Miller Place. "This is a case of someone asserting racial inferiority of African American people."

Khevin Beaubrun, 18, a senior from Middle Island who was in the photo, captured part of the slideshow on his smartphone and uploaded it to Snapchat where he suggested that he and his friends were staged to look like slaves. Hours later, Beaubrun said he was brought to the principal's office and told to delete the post or risk immediate suspension. He rejected the request and was not suspended.

"I am really disappointed because I trusted my teacher," he said. "As an educator I give him my trust to take the photo and I did not think it was going to be portrayed in that way."

In a statement Monday, the district conceded the photo and caption were "culturally insensitive" but said the teacher did not intend to mock the students. The teacher has made slideshows from past zoo trips with similar "Monkey See, Monkey Do" captions featuring white students, parents said.

"For the past several years, the high school teacher has taken a similar photo for use in a classroom PowerPoint presentation," said the statement, indicating that Heinrichs has undergone sensitivity training. "This particular photo was an unfortunate lapse of judgment. Without the intent of doing so, the photo was taken without fully understanding the sensitivity or the hurt it may have caused and reminds us that we must be more aware of the feelings of our multicultural population."

Heinrichs did not respond to messages and email requests for comment. A message left with the Middle Island Teachers Association, which represents Longwood teachers, was not returned.

Ray asked the commissioner of the State Department of Education to investigate the conduct of the school's administration and to order the suspension, and potential termination, of the teachers involved in the slideshow. A department official declined to comment, noting that the commissioner may be required to rule on an appeal arising from the case.

The pictures, taken by another teacher during a Nov. 5 trip to the Bronx Zoo, were shown to two advanced zoology classes on Dec. 20 before the December break.

Ray contends the photo of the students was intended to look like "The March of Progress," a commonly used illustration intended to show 25 million years of human evolution, with man evolving over time from apes to Homo sapiens.

The racist trope comparing African Americans to apes dates back generations and has been used to justify slavery and Jim Crow segregation, according to historians.

"I was horrified because African Americans have been through this already and it’s coming back again," said Desmond Dent Jr., 16, of Coram, who was pictured in the photo. "We should not be compared to any animal."

"We can't sit by and allow the greatest gift on Earth — our children — to be left in the hands of adults that are bullies, ignorant, unqualified, ill-equipped, or insensitive," Grier-Key wrote in a letter to district officials Wednesday.

Parents contend a prior slideshow by the same teacher was also offensive.

In a meeting last week to discuss the incident, school administrators showed parents previous years' slideshows, according to Butch Murray, whose grandson, Gykye, 16, was in the photo. A 2017 presentation, Murray said, featured a picture of a lion followed by a photo of three African American female students with the caption: "not all animals are cute."

"This made the hair on the back of my neck stand up," Murray said of the slideshow featuring his grandson.

The four boys say, for now, they have been encouraged by the administration not to return to the science class and that they should expect to receive a grade of "incomplete" for the class. Ray contends the students should be provided at-home tutoring to make up for the lost classroom education and that the two science teachers should be removed from the class.

CORRECTION: A previous version of this story misstated the legal action taken. The parents’ lawyer has filed a notice of claim, indicating they intend to file a federal lawsuit against the school district.