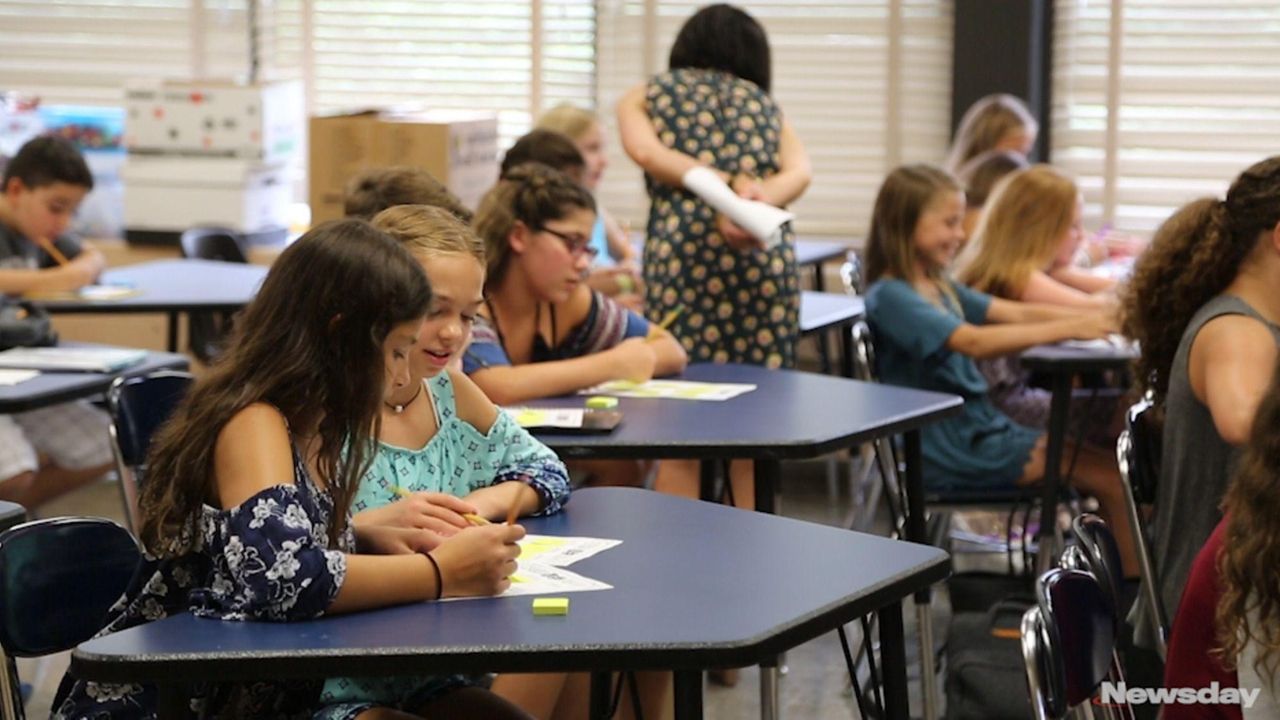 A total of 550 sixth-graders in the Massapequa school district started their school year at Berner Middle School on Wednesday, Sept. 6, 2017, after a bitter summer of parents divided over where best to house the students. Credit: Barry Sloan

“No, thank you,” the boy said, Iconis recalled. “I know where I am going.”

At long last, the district’s 548 sixth-graders entered Berner after a summer of drama — and uncertainty over whether they would attend the middle school or remain spread among the system’s six elementary schools.

When does school start in your district?

“We couldn’t ask for a better group of kids that just came in ready to go,” Principal Jason Esposito said.

The day marked a key test for the district, including Iconis, who long championed the plan to shift the sixth grade to Berner in an effort to expand academic opportunities.

A yearlong class called “MS 101,” designed as an introduction to middle school, focuses on easing the transition. Students have four foreign language courses from which to choose — French, German, Mandarin and Spanish. Intramural sports and more than 30 clubs are available to sixth-graders, including mock trial, debate club, student council, and even an early-morning choral group.

“I think this is an absolutely extraordinary district. But we can’t sit back on our laurels; we can’t,” Iconis said. “We must always look for ongoing progress, and I believe that this will be a ripple effect throughout the entire district. It will raise it to the next level.”

The finality of elementary school for the sixth-graders, who celebrated their moving-up in June with boat cruises and bagel breakfasts, was not a sure thing through July and August.

The district approved the shift in February 2016, and the move was scheduled for the start of the 2017-18 academic year.

But opponents of the plan, who gained a majority on the school board in last spring’s election, reversed the move on July 13, saying sixth-graders are better served in the nurturing environment of their elementary schools.

Then parents who supported the change petitioned state Education Commissioner MaryEllen Elia, and in August she barred the district from canceling the relocation until she issues a final decision. The school board sued, but a state Supreme Court justice in Albany County declined to immediately suspend Elia’s stay.

The building, with sixth through eighth grades, is housing about 1,625 students, up from 1,130 last year. School officials noted that Berner once was a high school, with 2,800 students.

On the third floor — where most of the sixth-grade courses are clustered — teacher Barbara Luba said to several who were scurrying into her class a few minutes late: “Don’t run, you’ll get there” and “Walk, it’s OK.”

She told her students that she, too, had arrived from an elementary, East Lake Elementary School in Massapequa Park. Twenty-six teachers from the system’s elementary schools were reassigned to Berner because of the sixth-grade move.

Deep divisions in the district over the change persist.

School board president Tim Taylor, an opponent of the relocation, said in an interview Wednesday, “This year, I want the best year these kids have ever had. Hopefully, it’s the only sixth-grade class that ever went to the middle school.”

This academic year, he said, the “number one board goal is to reconfigure the sixth-graders back to the elementary school.”

Parent Beth Henry, who initially opposed the relocation, said she still feels the same about her objections, but is “looking forward to a really great year.”

“I’ve always heard that Berner is a wonderful place,” she said. “I know my daughter is going to do well regardless of what building she was in. That was never my issue.”