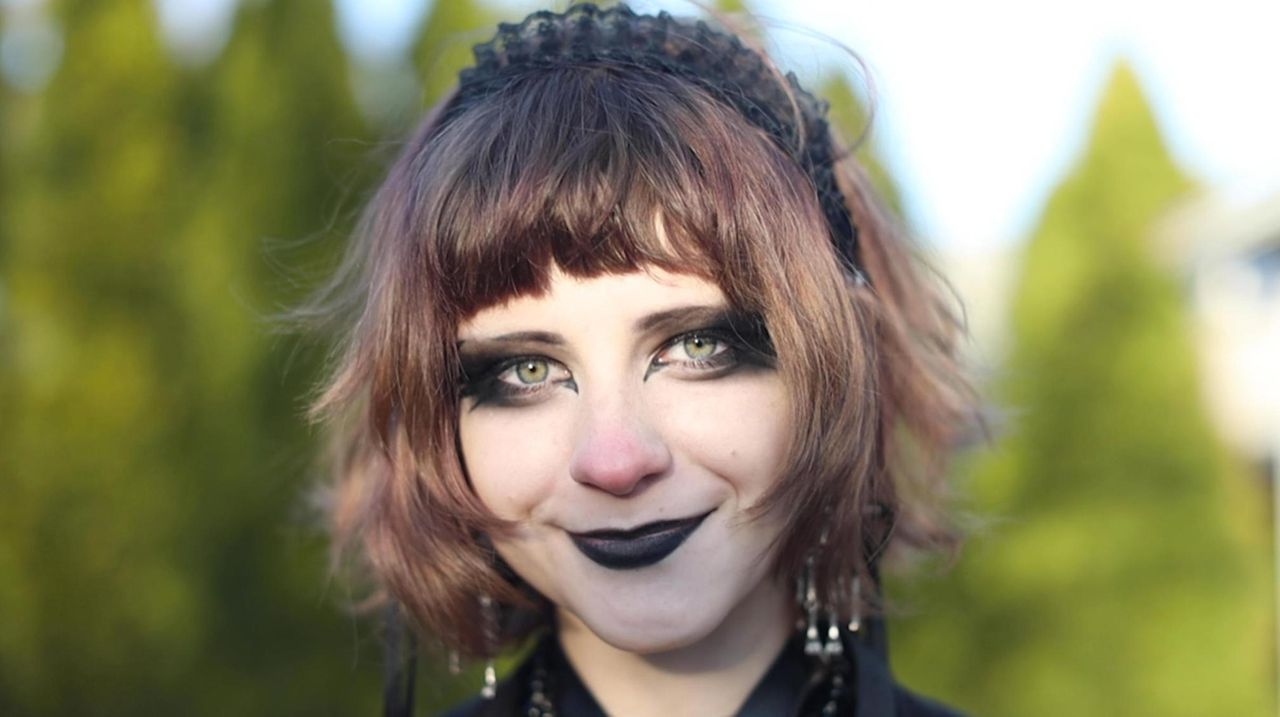 Weronika Jachimowicz, a student at Mattituck High School, has received a lot of attention online about her senior photo.  Credit: Kendall Rodriguez

A Mattituck High School senior’s yearbook photo has gone viral for the way the teen expresses herself in a punk rock fashion while still being a mainstream academic achiever.

The striking photo of Weronika Jachimowicz, the school’s 2021 salutatorian, features her wearing black horns, pentagram earrings and goth makeup, all while directing a knowing half-smile at the camera. It was first published by local news outlets and has since been liked on Twitter a half million times and counting by people cheering on her unorthodox aesthetic.

"I wish I was that confident," one commenter wrote.

While some might assume the dark clothes and makeup associated with goth culture could reflect an inner darkness, Jachimowicz said that isn’t the case.

"It's just mostly what makes me happy. There really isn't anything behind it," said Jachimowicz, 17. "It's kind of just like when people prefer one food over another. I just prefer one style over another."

Jules Lipoff, a dermatologist and assistant professor at the University of Pennsylvania, saw Jachimowicz's photo in The Suffolk Times, a local newspaper, while visiting his in-laws on the North Fork. He posted the photo with the words "you go girl" on Twitter and it took off from there.

Lipoff said he hopes his daughters, ages 3 and 7, will possess the same belief in themselves that Jachimowicz projects.

"My initial reaction was surprise, but also admiration," said Lipoff, adding that he was the salutatorian at his Kansas City high school in 1999. "I just thought, this is something to behold. This is great."

Jachimowicz acknowledged that she has suffered some bullying over her look and even nasty comments from adults online over her yearbook photo. She said she got help for past mental health struggles. That help opened the door for her success, Jachimowicz said, and she advised anyone else to do the same.

"Once I was like, in a better mindset, I feel like that really helped me push forward [with] everything," she said. "And I thought that if I truly put the time and effort into school, into doing that, that I could set a great road for myself."

She was on her school's fencing, winter track and pingpong teams, and a member of the National Honor Society and other clubs. She also volunteered with local libraries.

"I was always kind of to myself, so I thought that if I participated more, I would be able to open up," she said. "I got to meet so many people and connect with others by helping the community as well."

Jachimowicz has applied to several top schools and is waiting to hear back from college admissions offices before deciding where to attend. She plans to study biology and forensics. Eventually, she wants to pursue a career in forensic pathology, which she called her dream job.

The now-viral picture is a reshoot of her original senior year school photos. As a compromise with her mother, Jachimowicz agreed to take more traditional school photos and then retake them in the goth get-up for the photo that will appear in the school’s yearbook, she said.

Mattituck-Cutchogue Union Free School District Superintendent Jill Gierasch said she supported the decision to run that version of Jachimowicz's yearbook photo, as she is an inspiration to other students.

"She is being her authentic self," Gierasch said. "That's what we want to teach students. Be yourself, don't be somebody else."

The photo reshoot was a fair compromise, Jachimowicz said, but she advised other teens against changing who they are to please others.

"It's not worth it … it's going to make your mental health go down," she said. "You're not hurting anybody by being who you are."