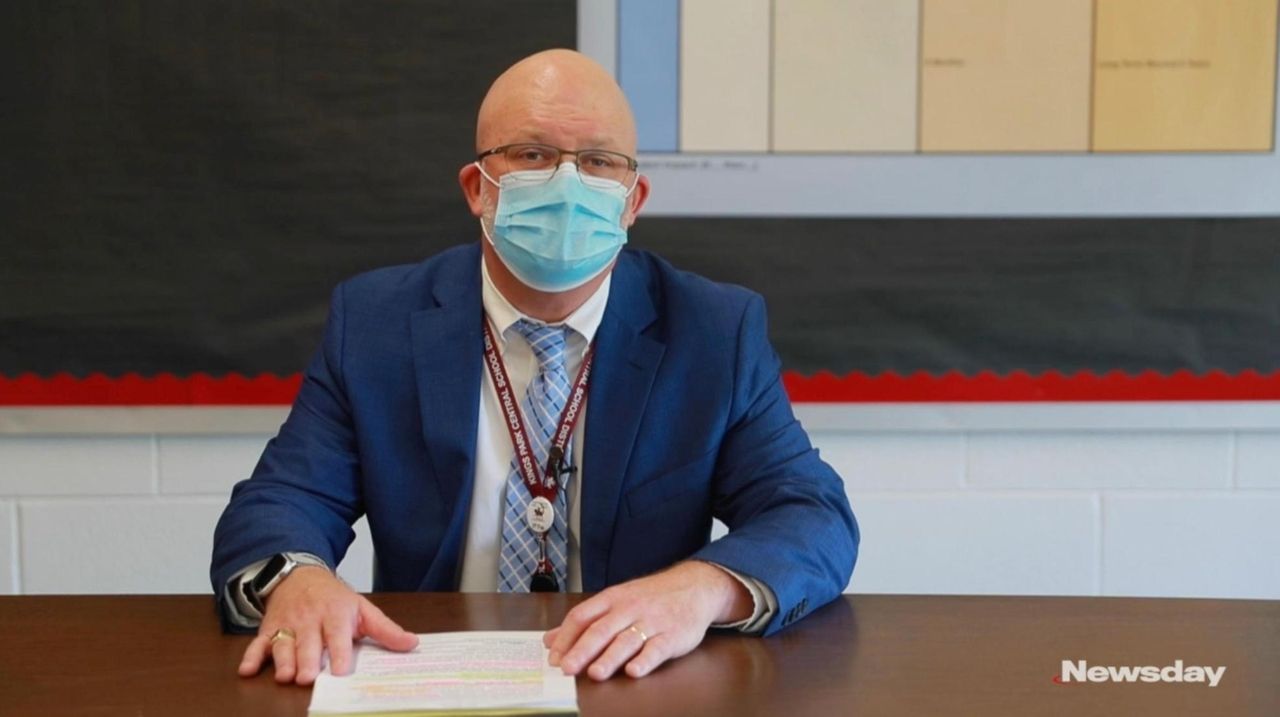 Timothy Eagen, the Kings Park school superintendent, talks about a Suffolk survey that found 84% of elementary schools in the county were open for full-time, in-person instruction by the end of November — four months before the national check by federal authorities.

School taxes across Long Island are slated to rise an average 1.38% next fiscal year — the lowest projected increase in five years and one of the lowest in a quarter-century, a Newsday analysis found.

School spending, meanwhile, will grow by an average 2.91%, to an Islandwide total of $13.75 billion, with millions of additional dollars earmarked for teacher salaries and COVID-19 protection. That money covers the 2021-22 school year, which starts July 1.

Spending, subject to voter approval, does not include hundreds of millions of dollars in federal stimulus money that is also going to schools in the Nassau-Suffolk region. Much of that money can be spread over three years.

Proposed budgets are up for votes Tuesday in 120 districts across the Nassau-Suffolk region, along with more than 400 candidates for school boards. Proposed taxes vary widely, from freezes or reductions in 20 districts to an 8.93% hike in Bridgehampton. And one big issue on board agendas is the pace of school reopenings amid continued, but diminished, health risks.

Julie Lutz, chief operating officer of the regional Eastern Suffolk BOCES, said the record infusion of federal and state financial aid helped districts build budgets that will "meet the needs of students while also being respectful of taxpayers."

"Long Island is incredibly and historically supportive of its schools when it comes to approving budgets, so we're optimistic," Lutz said.

Passage rates for budgets have run over 98% for five years running. This included elections last May, when voter participation hit a record high, due to the state's decision to provide mail-in ballots universally as a health precaution during the pandemic.

Reopenings playing role in board elections

Public support for schools, while widespread, had its limits, especially in communities where parents pressed for quicker reopening of buildings in the face of a pandemic. In Port Washington, protests by hundreds of parents pressured the district into reopening elementary schools five days a week.

Now, three parent leaders from that movement are challenging school board incumbents in Tuesday's election. Challengers said one of their goals is to encourage greater academic rigor — for instance, by expanding student research and strengthening college counseling.

"This is about transparency, accountability and excellence," said one member of the trio, Adam Smith, a real estate professional.

"We're doing everything we can to support the people who need support," said Larry Greenstein, a CPA and longtime board member.

Islandwide, school leaders acknowledged the pace of school reopenings has been controversial. Still, those officials contended the region's schools have done reasonably well, especially when compared with schools elsewhere in the country.

While comparisons are inexact, some evidence supports the regional position. Consider the results of two recent surveys, one by the National Assessment of Educational Progress, a federal agency, and the other by the Suffolk County School Superintendents Association.

Earlier this month, sponsors of the federal survey announced that 54% of schools nationwide serving students from kindergarten through eighth grade were open in March for full-time, in-person learning. Results were based on responses from 4,300 schools of 6,100 chosen for sampling in 46 states.

Meanwhile, sponsors of Suffolk's survey found that 84% of elementary schools in the county were open for full-time, in-person instruction by the end of November — four months before the national check by federal authorities. By March, Suffolk officials found full-time learning available in 94% of local elementary schools, 70% of middle schools and 58% of high schools.

Suffolk's study was based on responses from 49 of 68 districts in the county.

"We all know that taxes are high here on Long Island, but residents received the highest possible service in spite of the pandemic and the many challenges and obstacles it created for schools," Eagen said.

On the ballot: $13.8 billion in proposed spending, up 2.9%A recent billion-dollar-plus infusion of federal and state aid for Long Island schools is generating controversy as well as hope for expanded student services and taxpayer relief, as districts head toward annual budget votes Tuesday.  What you need to know for Tuesday's school election and budget votingVoting procedures are back to normal this year, with absentee ballots provided only upon request. Masks will be required in polling areas. School district 2021-22 budget and tax plans Long Island school districts are proposing to increase property tax levies by 1.38% to nearly $9.3 billion for the 2021-22 school year. LI school elections: full resultsSchool district residents went to the polls Tuesday to vote on budgets and members of their local boards for the coming school year. Here are the latest results from LI's 124 districts.