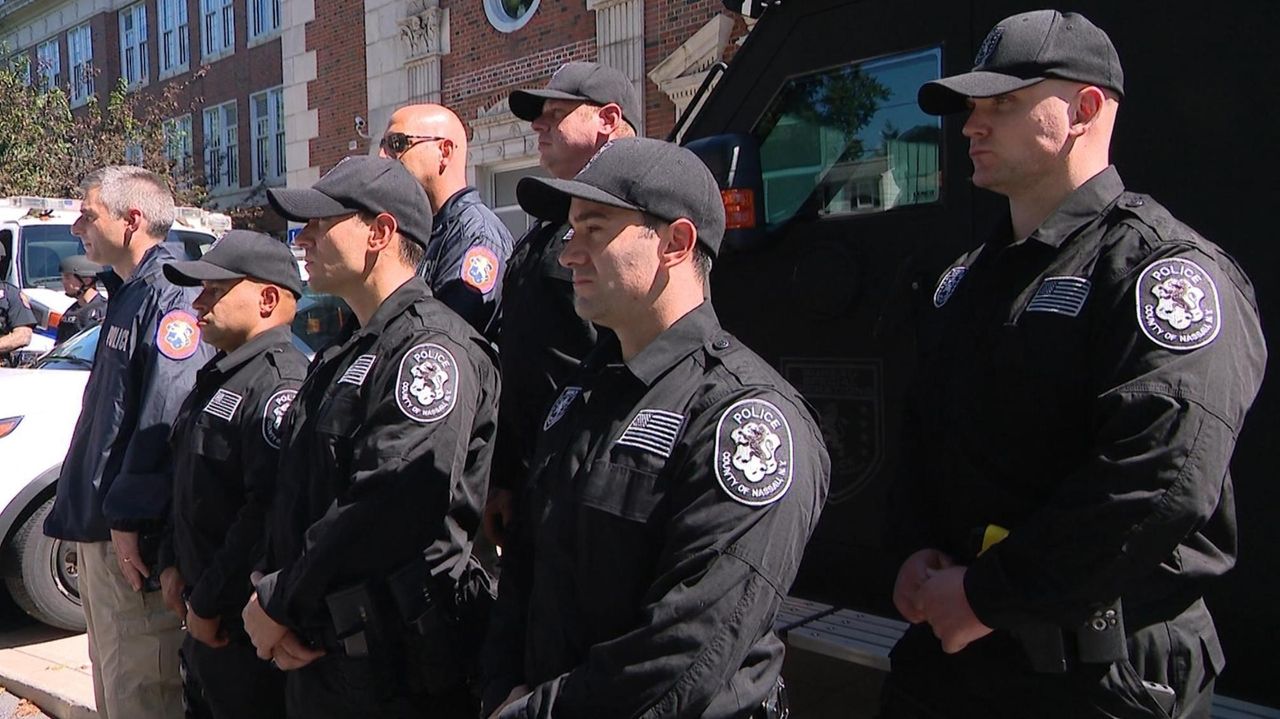 Nassau County Police Commissioner Patrick Ryder announced Thursday that the pubic should expect a large presence of Nassau and other village and city police officers at the county's public schools as they reopen for classes next week. Ryder said he wants officers to familarize themselves with the county's school buildings, in the event they had to respond to a mass shooting.  Already, Ryder said, each patrol officer is required to visit a school on each of their shifts. Credit: News 12

Nassau police officers have a new weapon for breaking down doors to stop a potential active shooter at county schools and, as a result, save the lives of students and teachers, officials said Thursday.

In Suffolk, all police officers will soon get similar devices as both departments look for ways to harden campus security ahead of the new school year.

Nassau Police Commissioner Patrick Ryder said each of the department's 177 sector vehicles will soon be equipped with the newly purchased breaching devices, described by a department official as part sledgehammer, part crowbar and modeled after the Halligan bar used by firefighters.

"If someone is trapped behind a wall, through glass, behind a door, and the shooter's in the building, we'll breach that door," Ryder said outside Mineola Middle School, where he was joined by Nassau County Executive Laura Curran and Mineola Schools Superintendent Michael Nagler.

"Every single police car will have it," Ryder said of the new crime-fighting tool.

Additionally, more than half of the patrol force has already been provided with tactical tourniquets — devices that exert pressure on a gunshot or other wound to stop blood flow. Each officer will have a tourniquet and a secondary one assigned to the department's sector vehicles. Training for both devices will be completed by next week, he said.

The tools are the newest in the department's arsenal, which already includes a cellular phone application that allows school officials to reach police instantly. The app helps speed up officers' response time to stop a mass shooting and render aid to the injured, Ryder said.

Suffolk County Police Chief Stuart Cameron said in an interview Thursday that his department is in the process of adding to its limited number of Halligan-like tools and sledgehammers.

Officers in Suffolk already have tourniquets with clotting gauze to stem bleeding from gunshot wounds and received training in how to use them. Blood loss is often a main factor in mass shooting deaths, Cameron said.

The drill will also test the Rave Panic Button, a mobile app designed to instantly deliver data to 911 dispatchers and first responders, officials said. Police and schools in Nassau also use the Rave app.

"The shooter is trying to kill as many people as they can and we, law enforcement, are trying to stop them as quickly as we can and render first aid to the injured," Cameron said. "So it's a race, and minutes save lives."

With the majority of schools set to reopen for classes next week, officials in the Suffolk and Nassau police departments say the public should expect a large law enforcement presence on Long Island campuses. Ryder said he wants officers to familarize themselves with the county's school buildings in the event they need to respond to a shooting.  Already, Ryder said, each patrol officer is required to visit a school on their shift.

"We're prepared in case this happens but we can't stop everything and we know that," Ryder said. "So the reality is, it can happen. But the better prepared we are, the safer everyone will be."

Each of the county's 56 public school districts has signed onto the department's Rave mobile app, Curran said. Many private and parochial schools will also use the app this fall, she said.

"We in Nassau County are ready," Curran said. "Our goal, our shared goal, is to make sure this school year, opening of schools, is as safe as it can possibly be. This isn't something that we just start thinking about in August. It's something we focus on 12 months a year."

Curran said all the county's school buildings have been assessed for security.

"The more you can reduce response times," she said, "the more lives are saved."

Nagler said his school principals are regularly in contact with patrol officers, precinct commanders and the department's Homeland Security Unit.

"We regularly have officers stop in our buildings on their patrol," Nagler said. "They know the principals, they know the layout of the schools. We've been trained. We have unprecedented access to commanders and Homeland Security to do drills. … I'd like to think they give us a little special attention because we're schools."

Nassau police have in the past given their officers equipment to deal with mass shootings.

In 2015, the department purchased nearly 300 military-grade helmets and vests that can withstand semiautomatic gunfire for each patrol car.
Officers in the department's specialized units, such as the Bureau of Special Operations, have long been issued specialty vests, helmets and other protective gear because of their role in responding to active shooters.

But patrol officers, who are often the first on the scene, need the same protection, police said.

State moves to clear logjam of rent relief applications
1:39
Quogue police: Officer tried to stop speeding motorist moments before crash that killed 5
Petition seeks to bar nonresidents from speaking at school board meetings
Court papers: Former LIRR supervisor pleads guilty in alleged OT scheme
Shea on vaccine mandate: 'We are going to comply with the order'
Nassau police official: The number of opioid overdoses 'shocked my conscience'
Didn’t find what you were looking for?