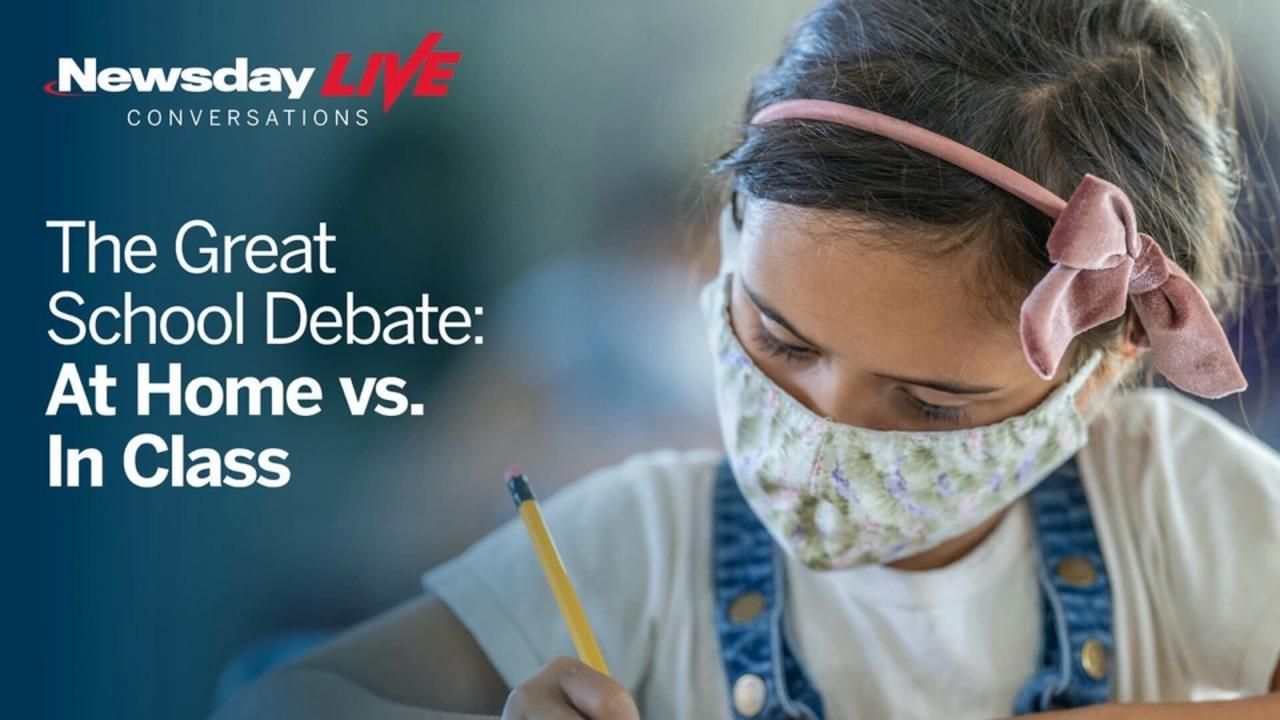 As school openings approach, parents in some districts are concerned with the options being offered for their children. Watch their discussion in this Newsday Live conversation. Credit: Newsday

Parents in some Long Island school districts said they had to get involved when officials made the switch from in-person to remote learning for their children.

“We did not love the online experience,” said Adam Smith, whose son in the Port Washington school district was forced to do remote learning because of the coronavirus pandemic. “We knew from what we saw in the spring that the district was incapable of any sort of e-learning that was going to be successful.”

Smith was one of three parents who spoke Tuesday during a Newsday Live panel titled the “Great School Debate: At Home vs. In Class.” He said that there was no transparency when the district made the switch to hybrid learning.

“I knew that because I had been quiet leading up to that change from five day to hybrid that I had to get loud to make sure it switched back from hybrid to five day,” Smith said.

The three parents who spoke said they didn’t believe prerecorded instructional learning was the best option. They believe their children would benefit from live learning — either in school or remote.

Dr. Lauren Block, an associate professor of medicine and science education at the Zucker School of Medicine at Hofstra University/Northwell, said she watched her child who attended a private school for pre-K thrive as he learned to read and was on Zoom calls with his teachers. Her other two children, who also attend the Port Washington school district, didn’t have the same experience.

“Our second-graders were not getting the same level of education we thought” they should, said Block. “There was a ton of caring and effort by the teachers … but there seemed to be a lack of organization and things seemed to be constantly shifting, making it difficult for the teachers to do the job that our kids needed to allow us as working parents to structure our day so that we could be productive in terms of our professional role.”

A Port Washington spokesman cited a letter issued to parents on Aug. 28 that said the district was working to get elementary students back in school. “This new plan will allow us to achieve that goal some time towards the end of September. It includes an alternating day phase-in of between eight and 16 days (depending on the arrival of equipment), culminating in all elementary students attending school five days a week in one classroom with their assigned teacher and classmates for the 2020-21 school year."

For Penny Glaser, a family lawyer whose daughter attends Smithtown High School, her concern was that prerecorded material wasn't sufficient when her teen didn’t learn algebra.

Her daughter "is facing ACT, SATs, AP courses, honors courses, regents courses" and won't be able to keep up "with her peers in neighboring districts like Hauppauge or Three Village that have agreed to go full day five days a week,” she said.

The Smithtown school district has not told parents when students would be able to go back to school full time, Glaser said.

A Smithtown district spokesman on Tuesday referred Newsday to the frequently asked questions on the district website, as well as the district’s reopening plan, which says: “Transitioning from hybrid to full capacity in a safe, responsible manner is the path we intend to take. To get there, we need to establish many new routines and implement them in a consistent manner. We will need full cooperation in this work from our staff, students and parents.”