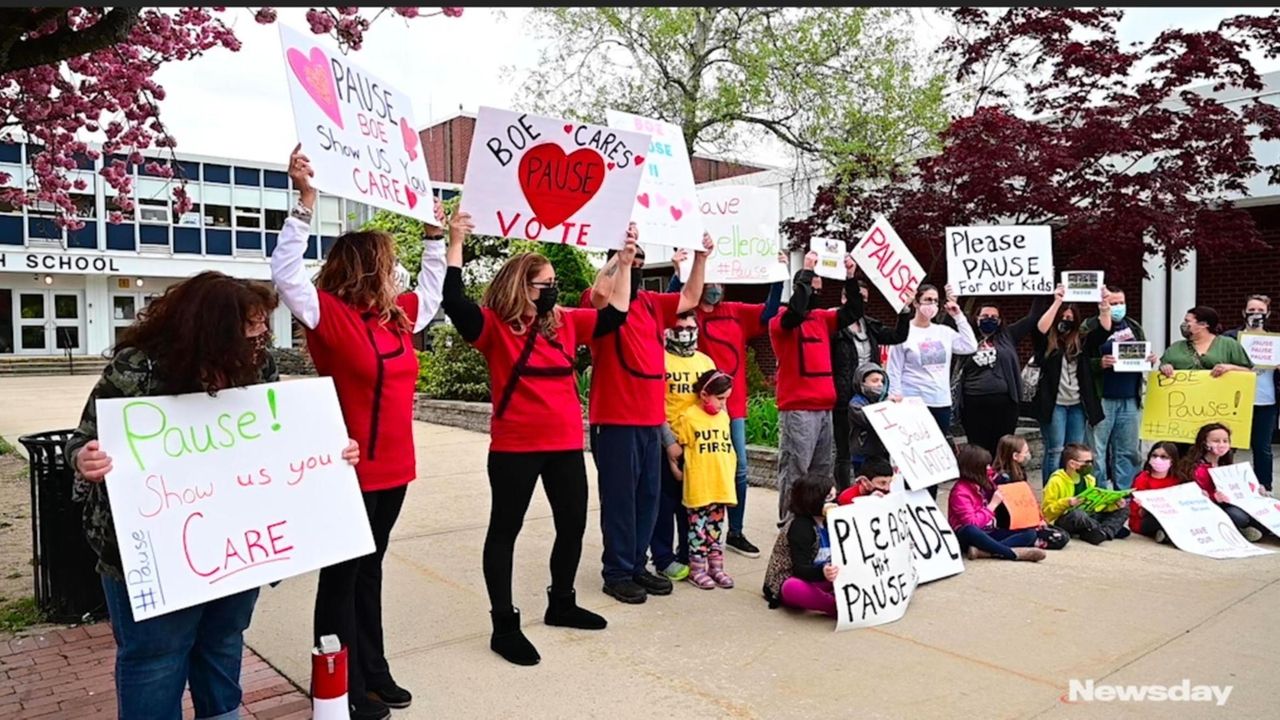 The Northport-East Northport school board voted Thursday night to close a pair of elementary schools. Newsday spoke to parents outside of the board meeting following the decision. Credit: Newsday / Thomas A. Ferrara

The Northport-East Northport school board voted Thursday night to close a pair of elementary schools, ending one chapter in a sometimes contentious debate sparked by parents concerned about overcrowded classes, and health risks amid the coronavirus pandemic.

At a special meeting to take up the issue, board members voted 5-2 to close Bellerose Avenue and Dickinson Avenue elementary schools, effective Aug. 31.

In a statement after the vote, school district officials said they are "looking forward to working in partnership with our community to successfully transition our students and implement the enhancements that can be provided under this new model."

Closing the schools will move the district to a K-4, 5-8 and 9-12 model, with students from the closed campuses being rezoned to the remaining four elementary schools. Fifth-graders would leave their elementary schools one year earlier.

The new configuration starts in the fall, district officials said.

"It's something we have been working on for years and I know it's not an easy issue," Superintendent Robert Banzer said at the meeting, in reference to opponents of the plan.

Speaking to those in the audience, Banzer said: "I really want to thank you for your input. … positioning ourselves for the future, we spent a lot of time as we should, thinking about a high quality educational program for our students … we are in a situation now where there are significant threats to that."

With both schools closing, Banzer said, the district "will be able to withstand the financial concerns that are upon us and maintain that high quality program that this community expects for its children."

At hearings, including one Tuesday night, some parents had asked the district to hit "pause" on a decision, over their concerns of overcrowding and safety with the coronavirus continuing. One parent asked the board to wait at least a year.

Thursday night, several people in the audience asked to address the board about the schools closing but public comments were not permitted.

Including Bellerose and Dickinson, the district has six elementary schools serving grades K-5, two middle schools for grades 6-8, and the high school. Bellerose, built in 1966, and Dickinson, built in 1956, enroll 274 and 369 students, respectively.

Closing both schools will save the district more than $7.1 million, according to a report on its website. In preparation for possible staff reductions, the district had offered a retirement incentive this school year to eligible teachers, the report read. About 60 staffers have taken the retirement package districtwide.

"These concerns and rising costs have been exacerbated by the COVID-19 pandemic and the recent settlement of certain tax certiorari proceedings brought by the Long Island Power Authority [LIPA] and others against the Town of Huntington concerning the assessed value of the Northport Power Plant, which is located within district boundaries," read the report.

LIPA contended the town overassessed the plant's property value for years and LIPA was paying far more in property taxes than it should have. The settlement reduced the amount of property taxes LIPA will pay the town and school district going forward.

The district hired consultant SES Study Team of upstate Canastota in June 2019 and assembled a panel of community members to consider possible remedies to the declining enrollment and revenue issues. The report also said it would cost more than $10 million to upgrade and modernize the schools.

Correction: An earlier version of this story, posted before the final vote, prematurely reported that the board had approved the school closings.