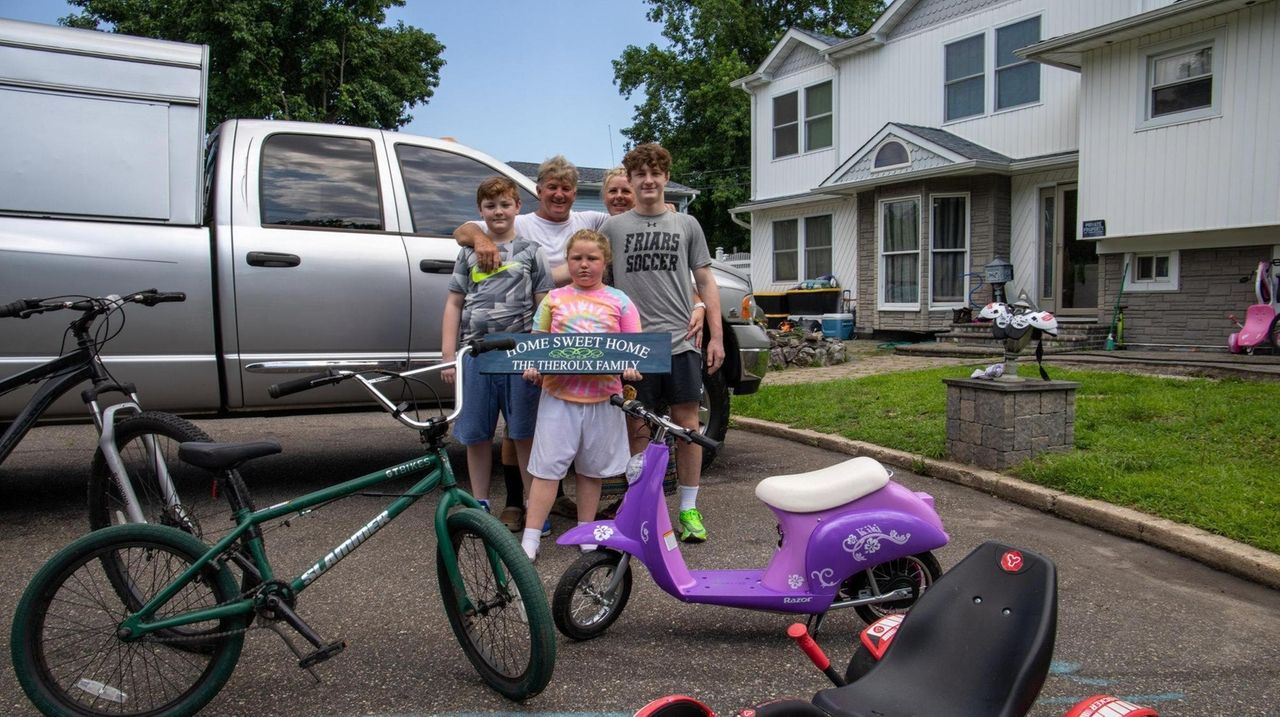 Families in Huntington and Deer Park talk about their children returning to school despite the dangers of the coronavirus. Credit: Johnny Milano & Morgan Campbell

Sandy Sanchez said there's no way her children would be safe in school amid the COVID-19 pandemic. The Lido Beach mother said she doesn't think she could wear a mask all day, let alone her kids do it. She wants them schooled at home.

"I personally think it's safer and wiser to not put my kids in harm's way," said Sanchez, 50, who has a daughter in middle school and another in high school.

As Long Island parents look toward the start of school — and await final plans from their districts and the state this week — they have different views on whether to send their children back into the brick-and-mortar world of education.

Many say they are aware that children constitute a fraction of reported cases and deaths, but some worry that much remains unknown about the coronavirus, which has surpassed 4.6 million cases in the United States, including more than 150,000 deaths.

Beyond that, they watched their children through the four months of school shutdowns, seeing many struggle with remote learning and become antsy trying to fill the empty hours. They've heard their kids' elation at being away from school transform to increasing calls to see their friends, play sports or act in the school play.

Jennifer Tidridge, a mother of two from East Islip, believes in-school learning can work with the proper precautions, such as mask-wearing and social distancing. She's hoping her children — Jackson, 6, who's going into the first grade at Timber Point Elementary, and Kamryn, 9, who'll be in the fourth grade at John F. Kennedy Elementary — can go back full time.

Sticking with remote learning, or sending them to school part time, would force her to send them to day care, which she said has its own risks of COVID-19 infection.

"What's the difference between day care versus school?" she said. "It's a risk no matter what."

School reopening plans were due to the state Education Department on Friday. Gov. Andrew M. Cuomo is expected to announce a decision on reopening this week. He previously said schools can reopen if the area's daily infection rate remains below 5% using a 14-day average.

Some parents are still weighing their decision about sending their kids back for in-person instruction.

"Everything is up in the air," said Jenna Prada, 37, of Huntington, who has a daughter heading into second grade and a son entering prekindergarten. "I am apprehensive, but not terrified."

When the coronavirus was hammering New York in the spring, Prada canceled her kids' summer camps. Her daughter Lili Fey, 7, took well to wearing her mask and social distancing. But there was little about remote learning Lili Fey could do without her mother's help. Fortunately, Prada's job managing educational tutors allowed her to work from home.

But then came the mother-daughter battles. Prada would try to teach her daughter a math problem one way, and Lili Fey would object, saying that's not the way her teacher does it.

Recently, Prada asked her daughter about going back to school. Lili Fey said she wasn't thrilled with the idea, the mother recalled.

"Then you can do the schoolwork at home with me," Prada said she told her daughter.

"Then I'll go to school," her daughter responded.

Tidridge, 39, said trying to teach her children at home had its shortcomings. She was able to help by working from home, but she worries that Jackson is not reading at the level he should. Kamryn liked the home schooling in the beginning, but that holiday feeling wore off and both kids would often sit around the house, she said.

"They would get their work done and play on their laptops, and I would get this guilty feeling keeping them cooped up," she said.

Tidridge has held off allowing the kids to visit friends' homes, but the family would go out for ice cream and trips to the park.

Jackson needed assistance through virtually every school task, Tidridge said. When Tidridge helped Kamryn, the two sometimes clashed. Kamryn would finish her work in 15 minutes and her mother would wonder aloud how much her daughter got out of it.

"I would fight with her," Tidridge said. "I would ask her to do some other work or read a book."

Stacey Theroux of Deer Park said she wants to send her three kids back to school, but she's not without concerns. Her main worry is the virus finding its way to her 79-year-old mother, who lives in the house. But Theroux said her mother lives in a separate part of the house and knows how to protect herself from COVID-19.

"That's my concern," she said. "Very few kids are getting it."

Theroux said she's seen the boredom take its toll on her children. They did well with remote learning, but they didn't learn much, she said.

Her son Jeremy, 11, who loves the performing arts, was crushed when school closed after he won a lead role in the school play. He wants to go back to school.

"After a while, that got less entertaining," Theroux said of her 8-year-old. "She loves school. She loves getting on the bus."

Many people hold out hope that a vaccine, expected possibly by the end of the year, will allay their COVID-19 concerns. But several parents said they are in no hurry to have their child injected with a new vaccine. They want to first see how it affects the population.

"I don't think I want us to be in the first group," said Paige Panzner-Kozek, 48, who has a son, Thelonious, going into the eighth grade and a daughter, Zsa Zsa, going into sixth.

She's taking the same wait-and-see approach to the reopening of schools. She wants to keep her kids learning at home for at least a semester until she sees how smoothly the plan proceeds.

"I want to feel very assured," said Panzner-Kozek, of Lido Beach. "I'm not taking a chance on their well-being."

When Sanchez thinks of her kids back in school, it summons a worrisome vision. She said she pictures a dozen children working with one teacher all day long in a room without proper ventilation.

"Companies are not putting a dozen people in a room for a meeting," she said. "Why should we?"

Her daughter Sienna, 15, who's going into 10th grade at Long Beach High School, said she's worried about going back to school, thinking she won't be able to wear a mask all day there.

Sanchez's younger daughter, Myla, 13, who's going into eighth grade at Long Beach Middle School, is more upset about missing school. She's coming to terms with the decision about having school at home, her mother said.

"She misses seeing her friends every day," Sanchez said. But, she added, "I'm not putting my kids' lives on the line."

What the poll says

The majority of Americans believe K-12 schools should either open with major adjustments or not at all, according to a survey conducted by The Associated Press-NORC Center for Public Affairs Research.