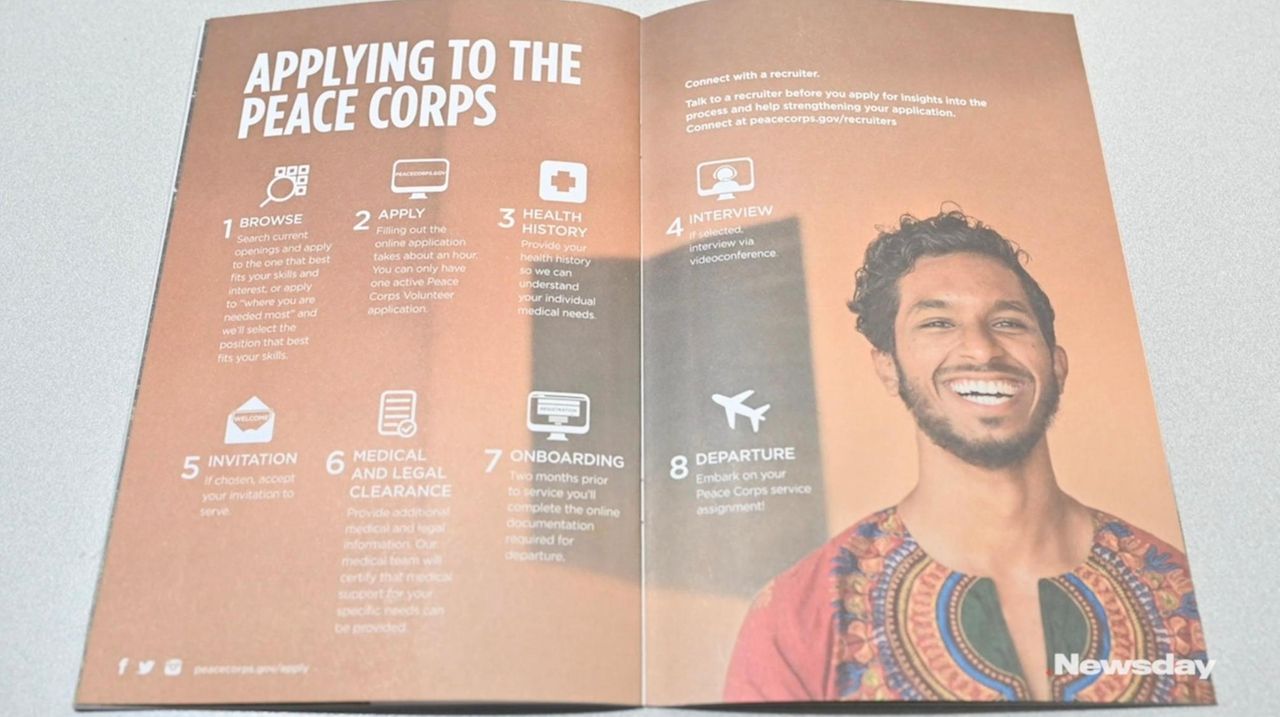 Stony Brook University is set to launch its new Peace Corps Prep program this week, just as the government service agency begins recruiting volunteers so it can return to service by early next year.

The Peace Corps evacuated about 7,000 volunteers from host countries around the world earlier this year because of the coronavirus pandemic.

"We are very actively trying to get people to apply, so that way we have a number of volunteers ready to depart when we are ready to return to our countries of service," said Teckla Persons, the Peace Corps' recruiter for New York City and Long Island. She said the agency was planning a return to service by January.

Stony Brook, which has had a long association with the Peace Corps, is preparing a program to introduce students to the agency, said Marianna Savoca, the university's assistant vice president for career development and experiential education. "Our relationship [with the Corps] is closer to 25 years old," she said.

"We are not creating courses for this program," Savoca added, but rather the university plans to utilize existing courses that are compatible with the Peace Corps' service "sectors" in areas such as agriculture, environment, education, community economic development, health and more.

"For each sector, they are required to take three courses," Savoca said. "So, in the environmental sector, as an example, the student could take African studies. That course is called environment and development in African history.

"Another example would be from our chemical engineering major, which has a course in sustainable energy. These sectors are interdisciplinary."

In addition to the coursework in whatever sector they choose, students also are required to get 50 hours of related experience over the course of their four years at the university, Savoca said. "They can choose to have a tutoring experience, or educational internship, or work at a summer camp," she said.

Eric Steinmuller, 25, of Islip, who graduated from Stony Brook last year, said he was drawn to volunteer for the Corps after hearing a diplomat speak on campus, mentioning that the Corps was "a good way to get into diplomacy, like working for the State Department." Steinmuller said his goal was to "work in international relations."

Steinmuller's Peace Corps assignment was a tiny village in the central African country of Cameroon called Manguen II, where he taught English. After three months of Peace Corps training in Cameroon last year, he went to the village in August 2019. He was evacuated in March because of the pandemic, short of the 27 months Peace Corps volunteers normally serve.

Grayson Manzi, 26, of Staten Island, graduated from Stony Brook in 2016. He didn't sign up for the Peace Corps until 2018, after trying other things. He landed in the South American country of Guyana as a volunteer in summer 2018, where he served as a "teacher to the teachers" in demonstrating "new methodologies" in science curriculum, and helped the locals with "wildlife clubs." He said he served in the "hinterlands" working with the indigenous, Amerindian people. He was evacuated in March as well.

Both men said they weren't seeking to be reinstated as volunteers, as they sought to move on, but praised their time with the Peace Corps.

Steinmuller said he had a "great" experience, adding, "The people were like a second family."

Manzi said he got the "full Peace Corps experience. But I’m at the point now where I’m ready to focus on my career development."

Savoca said the university had a Peace Corps recruiter on campus from 2015-19. Though the Peace Corps ended that program, she said Stony Brook was invited to form the prep program.

Persons said there were "133 schools that have the Peace Corps program. It’s a competitive process, and we only open the invitations to certain schools once a year, and Stony Brook was one of those accepted this last round."