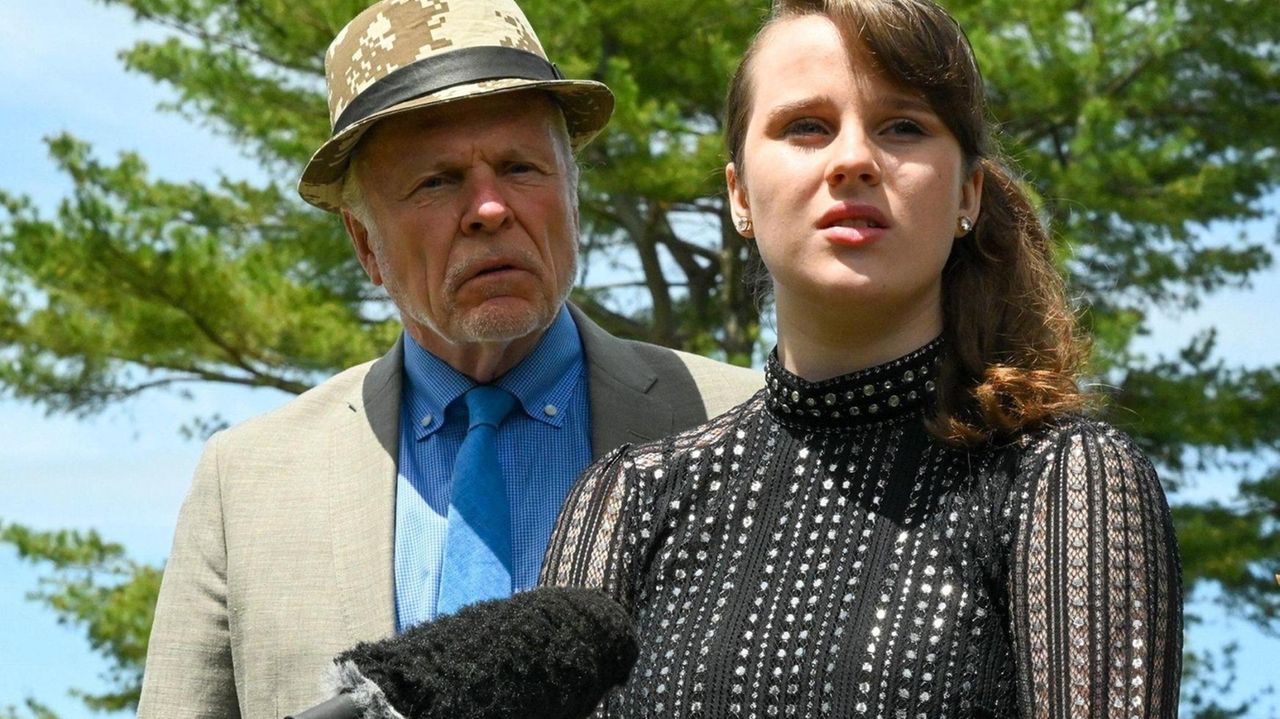 Attorney John Ray, at a news conference Tuesday, announced his daughter, a student at Earl L. Vandermeulen High School in Port Jefferson, plans to sue her school district for $2 million after it refused to publish her poem about the death of George Floyd in its literary magazine.     Credit: James Carbone

A Port Jefferson high school student plans to sue her school district for $2 million after it refused to publish her poem about the death of George Floyd in its literary magazine.

Tenth-grader Ruby Ray, 16, said school officials' reaction to her poem titled "Derek Chauvin's Ode to George Floyd: A Dark Sonnet" was racist and she will not let the district "crush" her 14-line poem.

"My sonnet captures Derek Chauvin's arrogant, cruel mind as he murders George Floyd," Ray said. "Racial discrimination is [the school district's] only motive for this suppression."

Ray, who is white, filed the notice of claim Tuesday in Suffolk County Supreme Court through her attorney, her father John Ray. The notice lists the respondents as the Port Jefferson Union Free School District; Eric Haruthunian, principal of Earl L. Vandermeulen High School; and Matthew Sefick, an English teacher who is the faculty adviser for the school literary magazine, The Mast.

District officials said they do not comment on pending litigation.

Ray's notice of claim said school officials indicated they refused to publish the poem because it would create adverse emotional reactions and strife in the community and among students and faculty.

In the poem, Ray imagines the thoughts of Chauvin as he struggles and eventually kills Floyd, 46.

"From Momma's hands, you had not any chance.

The street, the 'hood made you so young ashamed

To stand tall, to control your circumstance.

'Stay down,' they say, your fate is in our hands.

Who kneels upon your naked soul, who stands

On top your darkened head until you stop

Your sorry cry for mama; take no breath,

I bring justice here, pressed upon your neck.

If I decide, you now face certain death,

A fate deserved, 'cuz you passed a bad check.

You can't breathe? Then cease your Black man drama,

The death of Floyd one year ago Tuesday set off protests across the United States and around the world. Chauvin was convicted by a jury April 20 of second-degree unintentional murder, third-degree murder and second-degree manslaughter.

Noting that Port Jefferson is overwhelmingly white, Ray's notice of claim asserts that school officials refused to publish the poem "to please, protect, promote, placate, and defend white racism" in the community and elsewhere.

John Ray said his daughter was hurt by the rejection, and he considers it a violation of her First Amendment right of free speech. He said his daughter is a top student who has written for the literary magazine before and is applying to top colleges.

He said that while students have First Amendment rights in school, the courts have found that public schools have a fair amount of leeway in regulating in-school activities such as the school newspaper or literary magazine.

"If it's a school activity, the courts have been reluctant to try to micromanage a school's choices about that," said Hans, an assistant clinical professor of law at Vanderbilt Law School in Nashville, Tennessee.

He added, "I would rather see schools take a more permissible attitude. Students have a lot of good things to say, and the schools should be a venue for that."

Can vaccine holdouts on Long Island be swayed?
'Moulin Rouge! The Musical' sashays home with 10 Tonys
CDC director: Booster shots were expanded 'to stay ahead of the virus'
3:52
Gabby Petito's father: 'Her nature was always to smile'
Judge dismisses residents' lawsuit against Jake's 58 casino
Suffolk led NY in vehicle-related fatalities, crashes last year, data shows
Didn’t find what you were looking for?