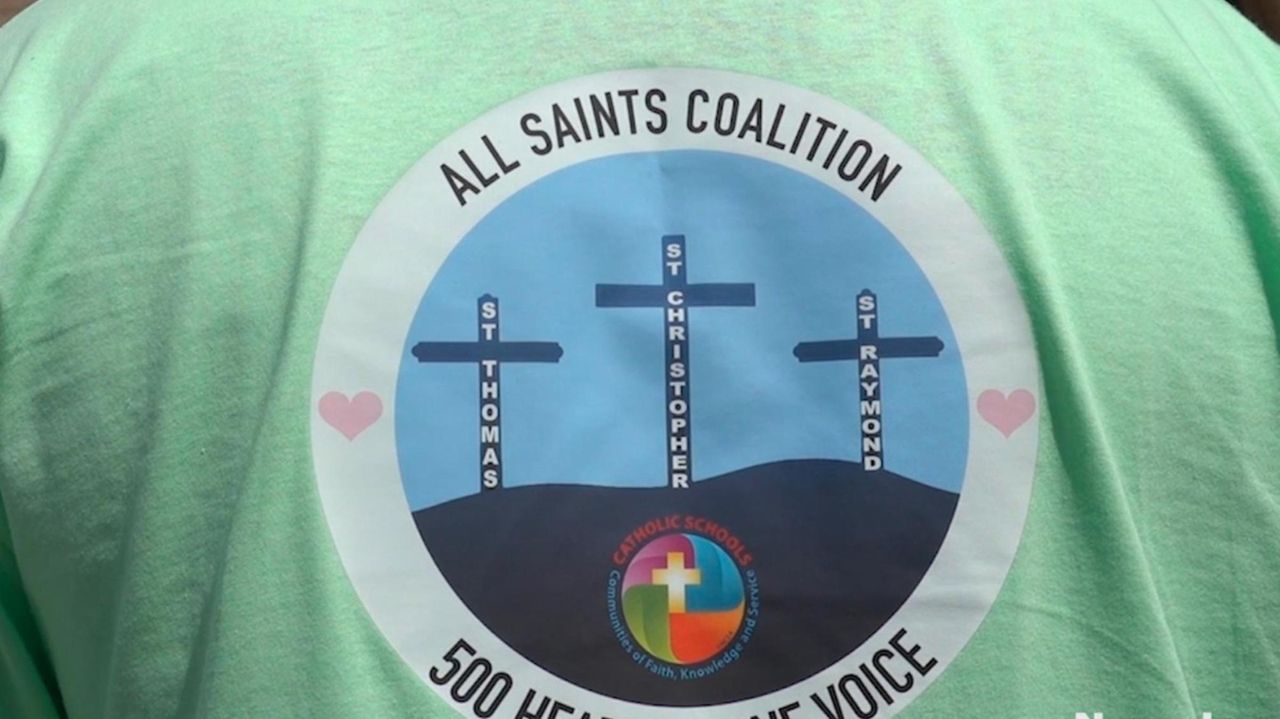 Parents and students from three Catholic schools that Diocese of Rockville Centre plans to close gathered outside St. Agnes Cathedral in Rockville Centre on Sunday to protest the move.   Credit: Debbie Egan-Chin

About three dozen parents, students and alumni prayed and protested Sunday outside St. Agnes Cathedral in Rockville Centre, saying they were blindsided by the decision to shut down three Catholic schools when the academic year ends in June.

The protesters, who call themselves the All Saints Coalition, said parish and Diocese of Rockville Centre leaders should work with them to find solutions for the declining enrollment and revenues forcing the closure of St. Christopher School in Baldwin, St. Raymond School in East Rockaway and St. Thomas the Apostle in West Hempstead. About 500 students will be impacted, the protesters said.

"They haven’t given us the chance to ask questions openly and honestly," said ASC organizer Terri Leno of West Hempstead, whose three sons attended St. Thomas the Apostle.

"My older sons have graduated and my youngest son is graduating in June. So why do I still have this hole in my heart?" Leno asked. "It is because nobody is listening to us."

Four other Catholic schools closed in June 2020. Diocese of Rockville Centre spokesman Sean Dolan said years of changing demographics, shrinking enrollment and revenues is to blame. The coronavirus pandemic struck the final blow: When attendance at Masses plummeted, so did donations, cutting deeply into the subsidies parishes provide the schools.

"We understand why people are angry and upset about the closing of schools," Dolan said.

Parish leaders, in consultation with the diocese and others, determined that the schools scheduled for closure were not financially sustainable, Dolan said. Students now at St. Christopher, St. Raymond and St. Thomas the Apostle should be able to find seats at other Catholic schools in the diocese, he said.

The protesters held a banner that said "God’s students should not be punished," and many wore green T-shirts in honor of St. Jude Thaddeus, who is often portrayed wearing green garments. He is the patron saint of desperate causes, Leno said.

"We pray for his intercession," Leno said before leading the group in reciting the rosary.

Members of the All Saints Coalition expressed fears that not every Rockville Centre family that wants their children educated in Catholic schools will be accommodated.

"What are they going to do with these 500 children," asked Anne Petraro of East Rockaway, whose son attends St. Raymond's just as she and her siblings did. "We want a plan."

Theresa Gaffney of East Rockaway, whose son and daughter attend St. Raymond's, said it is important for her children to get an education steeped in Catholic values.

Gaffney’s 12-year-old son John Gaffney said he doesn’t know where he will be going to school next fall.