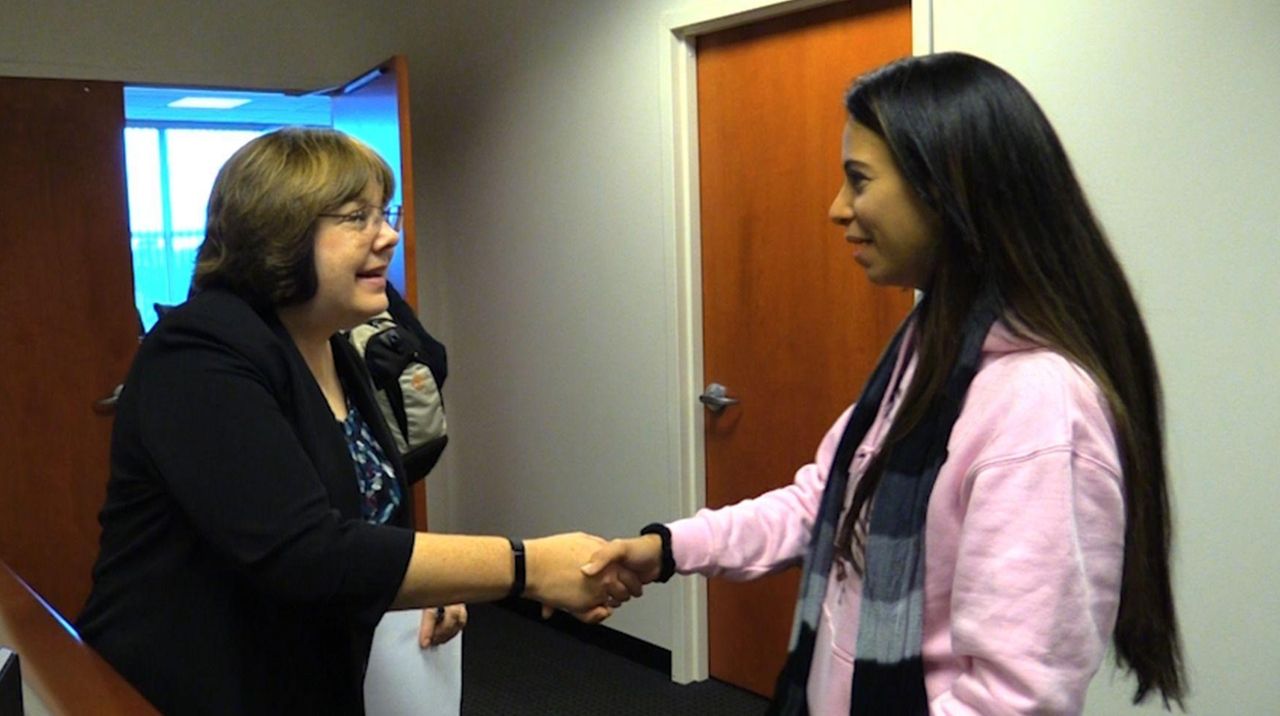 Nine students from The University of Puerto Rico School of Law in San Juan began classes at Touro Law Center in Central Islip on Monday,  Oct. 16, 2017. Contributions from law firms and New York City-based Puerto Rican Bar Association, will provide the students the opportunity to earn eight credits toward their law degree tuition-free, and offer free housing for the semester. Credit: James Carbone

The plane was soaring high above the island when Monica Rocafort looked down and saw the brown waters and destroyed houses. For the first time, she felt the enormity of her decision to leave her home in Puerto Rico to come to Long Island and continue law school.

“You think of all of the families and the kids — everyone who is really, really hurting right now. It’s tough to be forced out of your island,” Rocafort, 26, said through tears.

The San Juan resident was among a group of nine second-year and third-year law school students from the University of Puerto Rico who arrived Monday at Touro Law Center in Central Islip for their first day of classes.

The University of Puerto Rico School of Law, located in the Rio Piedras neighborhood of San Juan, has been shuttered since Hurricane Maria ravaged the island on Sept. 20. Rocafort, who spent that night in a closet with her mother and her dog, recalled the concrete walls of the family home trembling and, like others, the weeks after without electricity and potable water, the hours of waiting in line for basic supplies. She took her first hot shower in more than three weeks on Saturday night at a friend’s apartment in Manhattan.

“I’m so grateful for this opportunity,” Rocafort said of the Touro program.

The visiting students will spend eight weeks taking four classes specially designed to comply with American Bar Association regulations, to ensure they will earn eight credits toward their law degree. While they are at Touro, they will receive a mentor, have the opportunity to network with lawyers in New York and likely have better access to the resources that could help them advocate better for those they left behind in Puerto Rico.

On Monday, the students spent the morning filling out forms, learning their way around the law school building, the computer system and the law library and meeting professors.

There were several moments of levity — even a little salsa music was played on an iPhone — that served as a much-needed emotional respite.

Tuition at Touro costs about $1,645 per credit. The effort is being paid for by private donors, including the Manhattan-based law firm of Davis Polk & Wardwell and legal education provider iLaw-BARBRI, which offers the Bar Exam review course, as well as the Puerto Rican Bar Association, one of the oldest minority legal organizations in the United States.

“It’s our obligation and our privilege — our honor — to have them here,” Touro Law Center Dean Harry Ballan said.

Another student, Jose Camacho Vazquez, 26, lost the windows of his second-floor apartment in San Juan to the hurricane. When he left on Saturday, his building still had no power, even though it is near the island’s largest government medical center. He spent most of the last three weeks looking for diesel fuel and safe drinking water and waiting on long lines for canned food. His top concern was leaving behind his 66-year-old mother, he said.

“I was overjoyed when they said we could come here. I finally can get back to school,” Camacho Vazquez said. “We’ve just arrived but already it feels so meaningful.”

In recent weeks, several colleges and universities on the mainland have welcomed students displaced from their education while the island recovers. Students from Puerto Rico are able to pay in-state tuition at the State University of New York-operated campuses, as well as at Miami Dade College and Tulane University in Louisiana.

Students, educators and lawmakers have said it is critical for Puerto Rican students to continue higher education — and that in doing so they will be better positioned to aid in rebuilding the island.

“They are leaving a disaster-torn area. We have to make them feel comfortable and embrace them. Long Island has always been very family-oriented, so I’m calling on everyone to help out,” said Betty Lugo, founding partner of the Brooklyn law firm Pacheco & Lugo and immediate past president of the Puerto Rican Bar Association.

Within minutes of a bar association email message to Ballan, Lugo said, Touro had offered assistance to the students. Touro officials said is likely the students will stay past the fall semester if they are unable to return to their own school.

However challenging her studies at Touro may be, Aurelys Alers Ortiz, 27, said not knowing what is happening back home is going to be the hardest part of the next eight weeks.

“I’m really attached to my mom and my family,” said Alers Ortiz, who is the first in her family to attend law school.

“She’s so happy that I am here, and I know she is well too, but it is still hard.”

Opinion: Immigrants are crucial to hurricane recovery Rebuilding will require a great deal of new labor. Getting it through immigration is a win-win for both Americans and the immigrants.

Rep. Zeldin: I won't call Biden election 'illegitimate'
2:22
Long Island towns and cities getting into the weeds on NY marijuana law
1:12
Donations steady at Glen Ciano Blood Drive
Comptroller: Long Beach relying on 'one shot revenues' to balance budget
Cuomo: Half of all adult New Yorkers are fully vaccinated
Pride parade organizers ban cops from marching in uniform
Didn’t find what you were looking for?