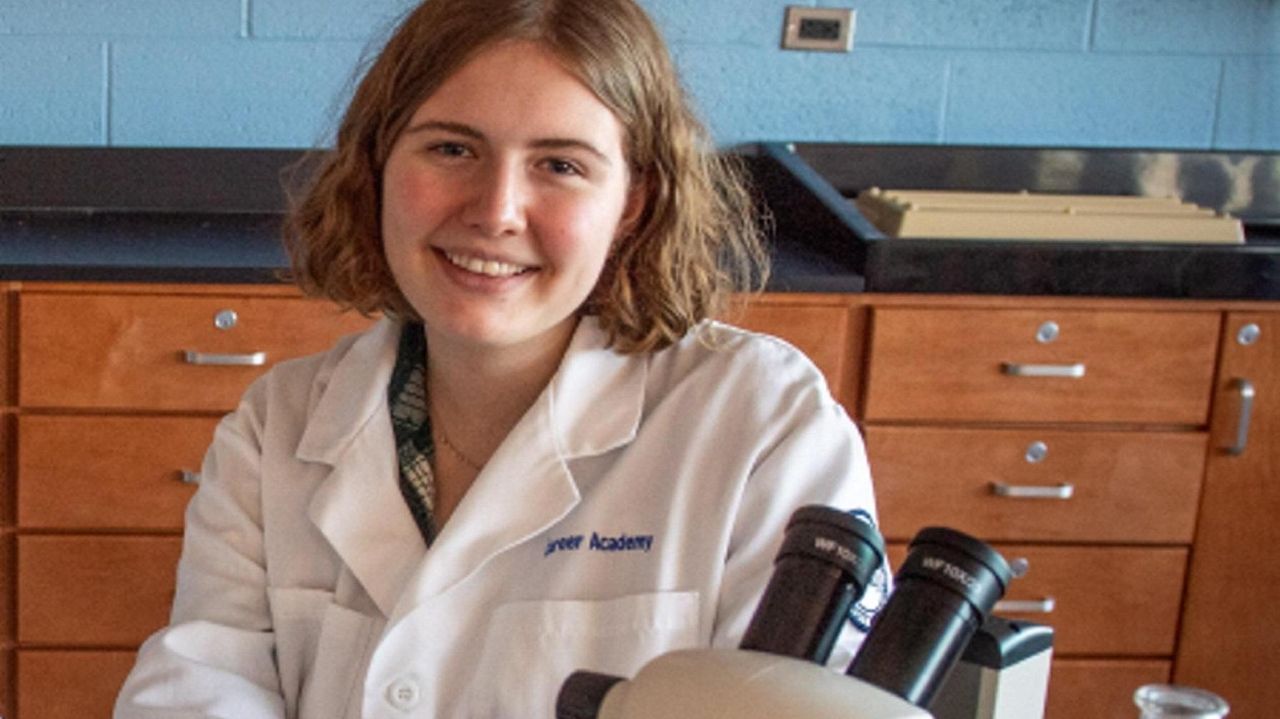 Four Long Island high school seniors were among the 40 finalists of the Regeneron Science Talent Search, the nation’s oldest and most prestigious science and math competition for high school seniors. Meet Andrew Brinton, Katherine St. George, Ella Wesson and Kyra McCreery and hear about their projects. Credit: Society for Science & the Public

Katherine St George, a graduate of John F. Kennedy High School in Bellmore, placed in the top 10 of the national Regeneron Science Talent Search competition Wednesday, winning an $80,000 prize and coming in sixth for her study of the impact of diet and caffeine on seizures in fruit flies.

St George, 18, of Merrick, graduated in June as the valedictorian of her school in the Bellmore-Merrick Central High School District. She was among four Nassau County high school students who made it to the finals of the nation’s oldest and most prestigious science and math competition for seniors.

Her research project demonstrated that a high-fat, low-carbohydrate ketogenic diet could counteract caffeine’s tendency to increase seizure susceptibility. Though it was already known that keto can decrease seizure susceptibility and caffeine can increase it, no one had investigated the combined effects of keto and caffeine before her study. She fed fruit flies different diets and exposed them to caffeine. The flies fed a ketogenic diet were not as susceptible to caffeine-induced seizures, which may inform diet counseling for human seizure patients, she found.

“I’m speechless,” St George said after learning she had placed sixth. She was especially thankful for her high school research teacher, Barbi Frank, and her mentor, Theodore Brummel, of LIU Post, who provided a lab setting for her work.

“I’m so grateful for everyone who helped me along the way," said St George, who is headed to Columbia University in the fall.

For the first time in its 78-year history, the competition took place virtually. More than $1.8 million was awarded to the 40 finalists, who were evaluated on scientific rigor, problem-solving abilities and potential to become scientific leaders. While funding sources have changed, the contest has been run continuously by the Society for Science & the Public, a nonprofit group in Washington, D.C.

The remaining 30 finalists each received $25,000, including three Long Island students:

Taking the top prize of $250,000 was Lillian Petersen, 17, of Los Alamos, New Mexico, who invented a tool for predicting harvests early in the growing season.

"The current pandemic has made it clear how important science is to our well-being. With these finalists at the forefront of scientific and engineering discovery, I know we are in good hands," said Maya Ajmera, president and CEO of Society for Science & the Public.

The winners were selected from nearly 2,000 applicants, all of whom completed a research project.