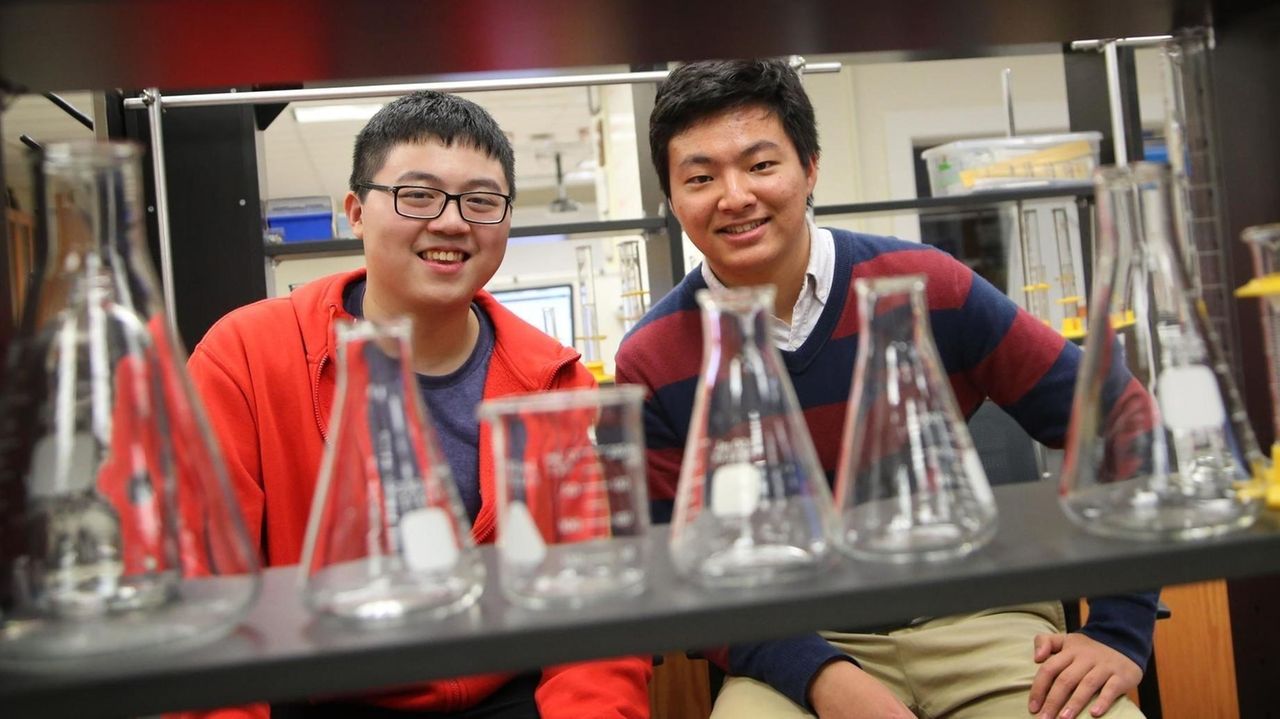 Jericho High School seniors Andrew Fang and Leo Lo stood side by side Tuesday in front of a computer in the science research classroom where they have spent so many hours, scanning the list of national finalists in the Regeneron Science Talent Search.

“There it is — I almost had a mini-heart attack,” Fang said as he spotted his name.

He and Lo broke into broad smiles.

The two are among 40 student scientists across the country to move to the prestigious contest’s next level. All finalists are awarded $25,000 and a chance to compete in March in Washington for the top $250,000 prize in the country’s oldest high school science and math competition.

2018 Regeneron scholars and their projects

“It’s really satisfying. It has been my dream since 10th grade,” said Lo, whose project focused on physics.

His passion for physics began when he was a young child and his parents took him to a science museum.

Fang’s research focused on medicine and health, specifically on treatment of Parkinson’s disease. He was mentored at SUNY Old Westbury’s Neuroscience Research Institute.

“Andrew’s focus, drive and intelligence produced an excellent research project,” said Wei Zhu, senior research scientist at the institute. “His discovery of an anti-malaria drug’s potential for positively impacting Parkinson’s sufferers may open a new door for the treatment of Parkinson’s disease.”

Lo was mentored at Stony Brook University, as were two other national finalists. Lo worked in the lab of Mengkun Liu, assistant professor of physics and astronomy in the university’s College of Arts and Sciences.

“Leo is definitely a rising star as a young researcher, and he has shown great passion and many talents as a student,” Liu said.

The national finalists were chosen from 300-plus Regeneron Scholars named earlier this month — 46 of whom were Long Island students in public and private schools.

Jericho High School had a total of 11 scholars — the most in the district’s recent history, the most of any district on the Island and the second-most in the state.

Serena McCalla, science research coordinator for the Jericho district, said in an email Tuesday that “Leo and Andrew embody the excellence needed to help our society excel in mathematics and the sciences over the next decade.”

The district’s program and the Regeneron research competition “will continue to stimulate and encourage young adults to identify solutions for issues faced by our society today and in the near future,” she wrote.

McCalla sent the statement from the Sundance Film Festival in Utah, where she attended the weekend premiere of the independent film “Science Fair,” in which she is featured.

The national competition is scheduled March 8-14 in the nation’s capital, with the top winners announced at a gala dinner and awards ceremony at the National Building Museum on March 13. Awards for the top 10 range from $40,000 to the $250,000 grand prize.

“This year’s Regeneron Science Talent Search finalists are some of the best and brightest young scientists and mathematicians in our country,” said Maya Ajmera, president and CEO of the nonprofit Society for Science & the Public, which sponsors the competition, and publisher of Science News.

This year’s contest drew more than 1,800 entries, which are judged based on the originality and creativity of the students’ scientific research, as well as their achievements and leadership both inside and outside of the classroom.

Description: Fang researched the potential of a compound called artemisinin, which is derived from a plant, to halt the progression of Parkinson’s disease. When he conducted in vivo research on fruit flies, he found that the compound showed promise.

Description: Lo developed a simulation method that may enhance the design of scattering-type scanning near-field optical microscopes and improve the efficiency of custom nanoscale material design.