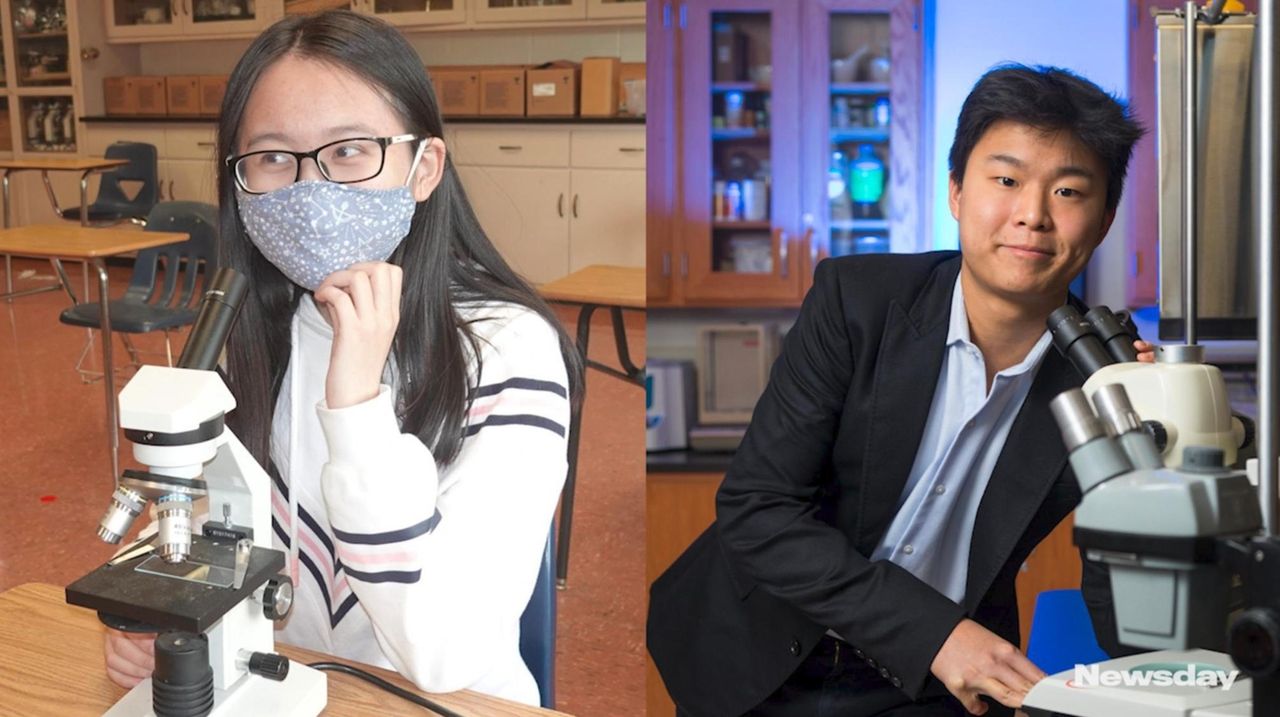 Two Nassau County high school students were among the 40 chosen as finalists Thursday in the Regeneron Science Talent Search, a prestigious competition that recognizes some of the brightest research minds in the country.

Lucy Zha, 17, of The Wheatley School in the East Williston district, was honored for her research on the impact of plant-based chemicals on cancer cells. Justin Shen, 17, of Jericho High School, focused on how amino acid in green tea can reduce toxicity in water pollutants.

The seniors, chosen from more than 1,700 applications, will compete in March with other finalists for the more than $1.8 million in awards being given by Regeneron, a pharmaceuticals company based in Tarrytown. The finalists were announced Thursday.

Zha studied the potential of the plant-based chemicals curcumin and capsaicin on neuroblastoma cells, as well as their effects on hypothalamic cells.

"Lucy is a remarkable student with a remarkable story, and what she has added to our school in terms of scientific abilities and enthusiasm and service has been absolutely wonderful," Wheatley School Principal Sean Feeney said. "We are very proud of her."

Zha chose her topic after a close relative was diagnosed with thyroid cancer. She was the only member of her family who spoke English, so she shopped for medicine for her relative — and noticed curcumin, a natural anti-inflammatory compound, on the store shelf. She said she was surprised to see it with Western medicine and decided to further study the plant-based chemicals. Her research examined not only the impact on cancer cells, but side effects, too.

"I wanted to emphasize that we must look at these two drugs holistically and look at both sides — not just the beneficial sides," she said.

Zha was mentored at the University of Massachusetts at Amherst for the start of her research and finished at a lab at SUNY Old Westbury. That lab was closed for a few months due to the coronavirus pandemic, but reopened and she was able to complete her work. She plans to pursue a career in environmental science and public health.

Shen conducted research showing that L-Theanine, an amino acid found in green tea, reduced the toxicity of trichloroethylene on neurons. Trichloroethylene is a common industrial water pollutant that can be found in many communities’ drinking water and has been shown to be a potential cause of Parkinson’s disease.

"When I first moved to Long Island in the fifth grade, I was surprised to hear a lot of rumors about water pollution, and that made me question what I was drinking every day," Shen said. He is a full-remote student at the school and said he found time during the pandemic to improve his project.

"It gave me a lot of time to refine my existing data," he said.

Shen also is a concert cellist who has performed at Lincoln Center and Carnegie Hall in New York City, and is a nationally ranked tennis player. He plans to pursue a career in scientific research.

The students said they have not decided where they will attend college. They were among 41 Long Island scholars honored by Regeneron earlier this month.

The finalists were selected from 1,760 applications received from 611 high schools across 45 states, Washington, D.C., Puerto Rico and 10 countries. They were chosen based on their research skills, academics, innovative thinking and promise as scientists, according to Regeneron.

The finalists will compete virtually March 10-17 for prize money. The top 10 awards, which will be announced during a livestreamed virtual awards ceremony on March 17, range from $40,000 to $250,000. Each finalist automatically receives $25,000.

In 2020, four Nassau County seniors were named finalists, including Katherine St George of John F. Kennedy High School, who placed sixth in the competition in July. She won an $80,000 prize for her study on the impact of diet and caffeine on seizures in fruit flies.

Regeneron Pharmaceuticals Inc. has funded the contest since 2016, and has doubled the annual prize money. The first competition was in 1942.

SOURCE: Regeneron and the Society for Science