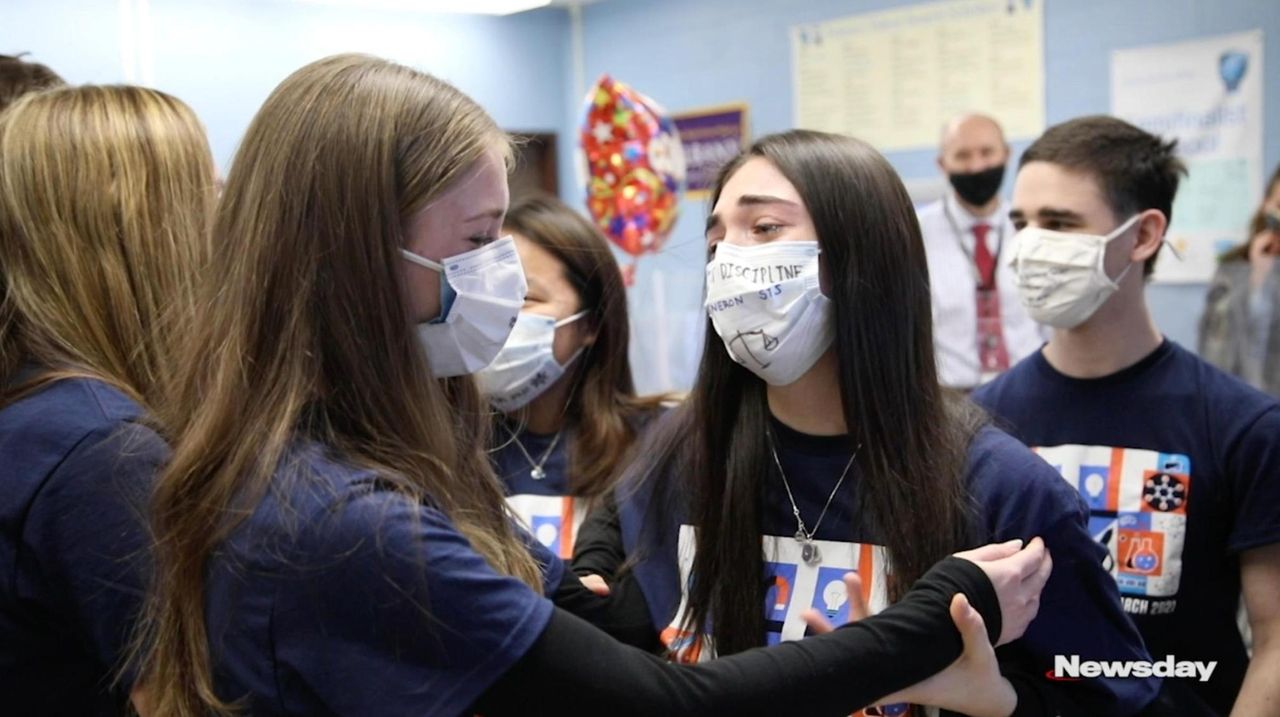 Five students from John F. Kennedy High School in Bellmore talk about their research on Thursday, after finding out that they are Regeneron Science Talent Search semifinalists. Credit: Barry Sloan

More than 40 Long Island high school seniors from public and private schools were honored Thursday as Regeneron Science Talent Search scholars, lauded by educators for overcoming obstacles such as closed labs and schools due to the pandemic.

Forced to adapt to remote learning, teachers mailed equipment so projects could be finished at home and spent hours on Zoom and other platforms to guide students. Some mentors even hand-delivered supplies to students.

"The students had to immediately find new ways to complete their work when their laboratories closed, and they were dealing with social and political unrest and the fear that the pandemic was creeping into their families," said Serena McCalla, science research coordinator for the Jericho school district. "With most of them being remote, they were unable to have that one-to-one communication. … It has been an unprecedented year."

There were 36 Long Island scholars last year and 41 this year, including those from several Suffolk districts, including Brentwood, Central Islip and Elwood.

The scholars were selected from 1,760 applications received from 611 high schools across 45 states, Washington, D.C., Puerto Rico and 10 countries. They were chosen based on their research skills, academics, innovative thinking and promise as scientists, according to Regeneron.

On Jan. 21, 40 of the 300 scholars nationwide will be named finalists. From March 10 to 17, the finalists will compete for more than $1.8 million in awards provided by Regeneron, a pharmaceuticals company based in Tarrytown.

Vyom Shah, 17, of Jericho, was going to the Cold Spring Harbor Laboratory for research with his mentor, Dr. Semir Beyaz, until the pandemic forced him to work from home.

"I was a bit sad I couldn’t continue my research," said Shah, who derived computational methods on a home computer to complete his work. His work was inspired by his mother, Mital, who had a breast cancer scare when he was in the eighth grade. She initially was misdiagnosed.

"Being scared for her and all that anxiety, I started to look at cancer biology," Shah said.

Shah's project focused on the connection between diet and cancer and how some fatty acids found in red meat could increase the likelihood of intestinal cancer. He hopes his research could pave the way for new therapeutic targets to treat cancer.

Alison Huenger, science research director at Manhasset High School, ordered equipment for students and had it shipped to their homes.

"They initially had mentors lined up. Those internships had fallen through, and we went from Plan A to Plan B to Plan M," she said. "It was heart-wrenching to see so many opportunities taken away, but even in the midst of that we were able to regroup and think of a new plan."

At John F. Kennedy High School in Bellmore, Jordyn Krinsky, 17, and Julia Levine, 17, both needed a specific strain of fruit fly for their separate projects. Both were mentored by biology professor Theodore Brummel at LIU Post, who special-ordered the insects and made sure the students received them.

"I had to build a lab in my basement," said Levine, whose project looked at the impact of dietary alterations on celiac disease.

Elmont Memorial High School science research teacher Michelle Flannory, whose student Christopher Alexander was named a scholar, said she was "really proud of Christopher and all of my student researchers who persevered through such a difficult time."

Alexander, 17, completed a project that studied how viruses can be used to target cancer cells, as well as draw immune systems to attack these cells. He was impacted by close relatives who had suffered from cancer.

"I really got involved not only to help cancer patients and eliminate or decrease the amount of cancer deaths, but also to provide a more comfortable way of treating cancer," he said.

Isabella Souza, 17, of Syosset High School, has a passion for law and emerging technologies, and participated in the mock trial team. That led to her project, which examined the impact of functional magnetic resonance imaging evidence on juror satisfaction and verdicts.

By focusing on a social science, Souza said she felt "incredibly fortunate" as some of her classmates scrambled to replicate their laboratory work during the pandemic. She said she spent hours with her teachers on Google Meets.

"None of us could have predicted this, and the shock in general threw us off, but I am really happy I could continue working," she said.

In last year's virtual competition, Katherine St George, of John F. Kennedy High School, placed in the top 10 of the national competition in July after being named one of the Long Island scholars. She won an $80,000 prize and came in sixth for her study on the impact of diet and caffeine on seizures in fruit flies.

Regeneron Pharmaceuticals Inc. has funded the contest since 2016, and has doubled the annual prize money. The first competition was in 1942. While funding sources have changed over the years, the contest has been run continuously by the Society for Science, a nonprofit group based in Washington, D.C.