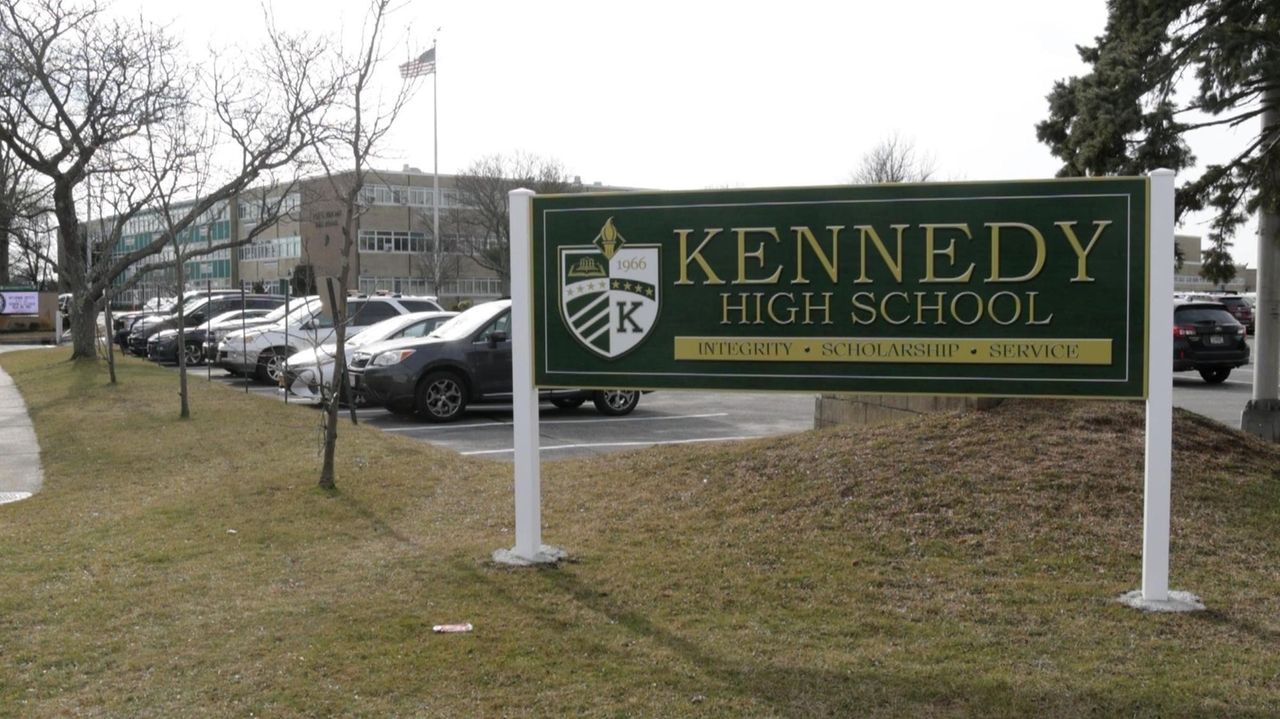 Students and faculty of John F. Kennedy High School in Bellmore share their excitement over the announcement that six of their students are Regeneron semifinalists. Credit: Newsday / John Paraskevas

Identical twins Ricardo and Roberto Lopez were chosen for separate research projects on Long Island's salt marshes. They learned about their achievements at home Thursday, as their school has been doing virtual learning because of the COVID-19 pandemic.

Their teacher and mentor, Rebecca Grella, drove to their home with a pizza to celebrate.

"We helped each other out," Ricardo Lopez said. "If I had a question, and Dr. Grella was not available, I would ask Roberto."

The 17-year-olds were among 300 seniors honored nationally and internationally, according to Washington, D.C.-based Society for Science, which runs the country's oldest and most well-known science contest. John F. Kennedy High School in Bellmore led all Long Island schools with six semifinalists.

There were 39 scholars from Nassau and 10 from Suffolk. Last year, Long Island had 41 semifinalists.

There were 39 scholars from Nassau and 10 from Suffolk, with their projects covering a variety of topics, including health-related issues, environmental concerns and social and behavioral studies.

Nine Nassau high schools, including JFK in Bellmore, had multiple scholars: four each from Syosset and Roslyn, and three each from Great Neck South, Herricks, Jericho, Manhasset, John F. Kennedy in Plainview-Old Bethpage and Paul D. Schreiber in Port Washington. In Suffolk, in addition to Brentwood, Smithtown East and Ward Melville High in the Three Village district each had two scholars.

Roberto Lopez said his project focused on invasive plants and that he used drone technology to monitor the salt marshes at Sunken Meadow State Park on the North Shore.

"You could lose motivation … but when I felt like giving up — my twin didn’t give up," he said. "And it made me say I had to keep going."

The three chosen from Jericho found out Thursday in class when their research teacher posted a screen from the competition organizers listing their names.

Wang started his research on Alzheimer’s disease in his sophomore year and spent a summer in a lab at the University of Chicago. He said he worked on his paper daily, after school, and submitted it the day it was due.

One of Wang's Jericho classmates, Sara Chan, submitted the research project "A Study of Polarization in Media During the Age of Media Consolidation and Social Media Through a Sentiment Analysis of the New York Times and Wall Street Journal."

Her project focused on the social sciences in a two-part study that included content analysis of thousands of headlines from The New York Times and thousands of tweets from The Times and The Wall Street Journal.

"I was looking to see how two different news sources are being affected by this age of polarization," said Chan, 17.

The COVID-19 pandemic also figured into some projects.

Desiree Rigaud, of JFK High in the Bellmore-Merrick Central High School District, studied "COVID-19 Induced Economic Stress: The Effect on Marital Functioning and Methods of Alleviating Financial Stress." Students at the school clapped and cheered when they learned of the honor Thursday, and Rigaud said the best part of working on her project was "being able to do it with all of these other amazing people."

James Murray, principal of Plainview-Old Bethpage's JFK High, was elated to learn that three of his students — Abigail Lev, Gabi Oliva and Olivia Schmidt — had been chosen, "especially after a crazy week coming back from the holidays."

Students there focused on behavioral and social sciences, including a project by Schmidt titled "Investigating Detrimental Effects of Text-Based Digital Communication on Emotional Literacy of Adolescents."

"For us to have such positive news to share with our school community — it means so much to us," Murray said. "We know how hard these kids have worked."

Long Island had 41 semifinalists in 2021. Two of those students, Jericho High's Justin Shen, and Lucy Zha, of The Wheatley School in the East Williston district, made the finals. Each received $25,000.

The 2022 scholars were chosen from 1,804 applications received from 603 high schools across 46 states, Washington, D.C., Puerto Rico and eight other countries. Scholars were picked based on research skills, academics, innovation and promise as scientists. They are from 185 American and international high schools in 37 states, China, Switzerland and Singapore. Three are being home-schooled.

Regeneron Pharmaceuticals Inc., based in Tarrytown, has funded the contest since 2016. While the sponsors have changed since the competition started in 1942, the contest has been run continuously by the nonprofit Society for Science.

"Amid an unprecedented and ongoing global [COVID-19] health crisis, we are incredibly inspired to see such an extraordinary group of young leaders who are using the power of STEM to solve the world’s most intractable challenges," Maya Ajmera, president and CEO of Society for Science, said in a statement.