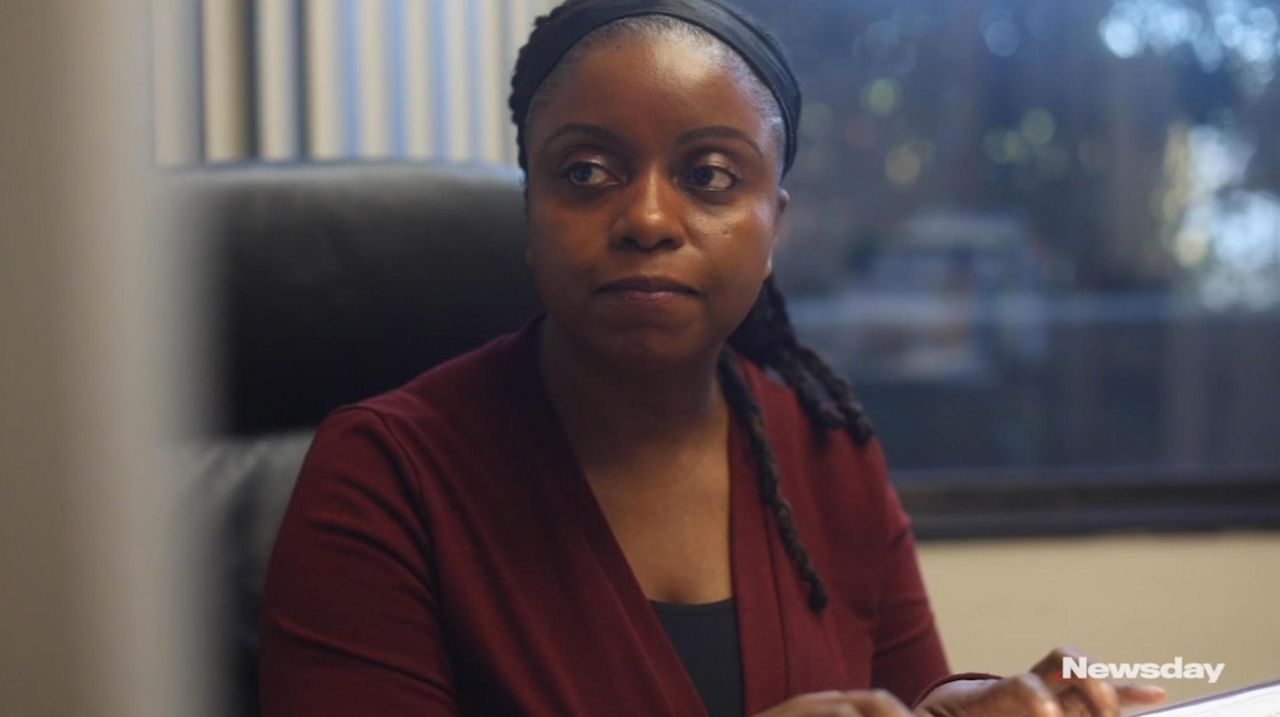 Cordelia Anthony, the president of the Farmingdale Federation of Teachers, talks about why the state Regents exams should be canceled this academic year.  Credit: Kendall Rodriguez

An influential statewide teachers union is calling for cancellation of standardized student testing for the second year in a row, citing academic disruptions caused by the COVID-19 pandemic.

Leaders of New York State United Teachers, or NYSUT, in a letter obtained by Newsday, urged the state to again seek waivers from federal testing requirements. The union umbrella group represents more than 600,000 teachers and other professionals in education, human services and health care.

Waivers, if granted, could result in cancellation both of state English and math tests usually administered in the spring in grades three through eight, as well as Regents exams most often given in June at the high school level.

"Educators know their students' needs and how to maximize their potential," said Andy Pallotta, the state organization's president. "Giving them the flexibility to help their students achieve their best without administering these tests is the right thing to do this year."

A continuation of testing waivers granted last year would require approval by the U.S. Department of Education. The incoming administration of President-elect Joe Biden has not yet said how it might rule on this question.

The status of state testing is a hotly debated issue on Long Island, with many educators contending that delivery of classroom instruction in the face of a health crisis varies too much from district to district to allow for fair comparisons of student performance.

Some independent analysts and others argue, on the other hand, that uniform testing is the surest way of determining which students may be falling behind as schools temporarily shut down, then reopen, in response to spikes in infection rates.

Cordelia Anthony, a Farmingdale teacher-union leader who favors waivers, noted that elementary schools in her own district were forced to shut down classes for two days last week and teach remotely due to an uptick in infections.

"It'll really give both students and teachers a little breathing room," said Anthony, referring to the prospect of waivers. "The elementary teachers especially are stressed beyond capacity. There is no normalcy at present."

Anthony, a science instructor, serves as president of the Farmingdale Federation of Teachers.

Results of several national studies, released in recent months, indicated that many students lagged in their studies of math last spring as schools shut down and relied solely on remote learning. This has prompted some calls for resumption of testing.

"Teachers need feedback themselves on how their instruction can be improved," said Laurann Pandelakis of Manhasset, a former teacher and administrator in the New York City and Hickville school systems. "If a child starts failing in the early grades, it has a lasting effect moving forward, so this should be remediated quickly."

NYSUT's letter, dated Thursday, was addressed to state interim Education Commissioner Betty Rosa. During a news conference on the same day, Rosa, in response to a question from Newsday, said she and the Board of Regents were probably getting fairly close to a decision and were in touch with the federal department.

Rosa added that "no decision has been made, but knowing that we are in January, we are looking at trying to make a decision as soon as possible."