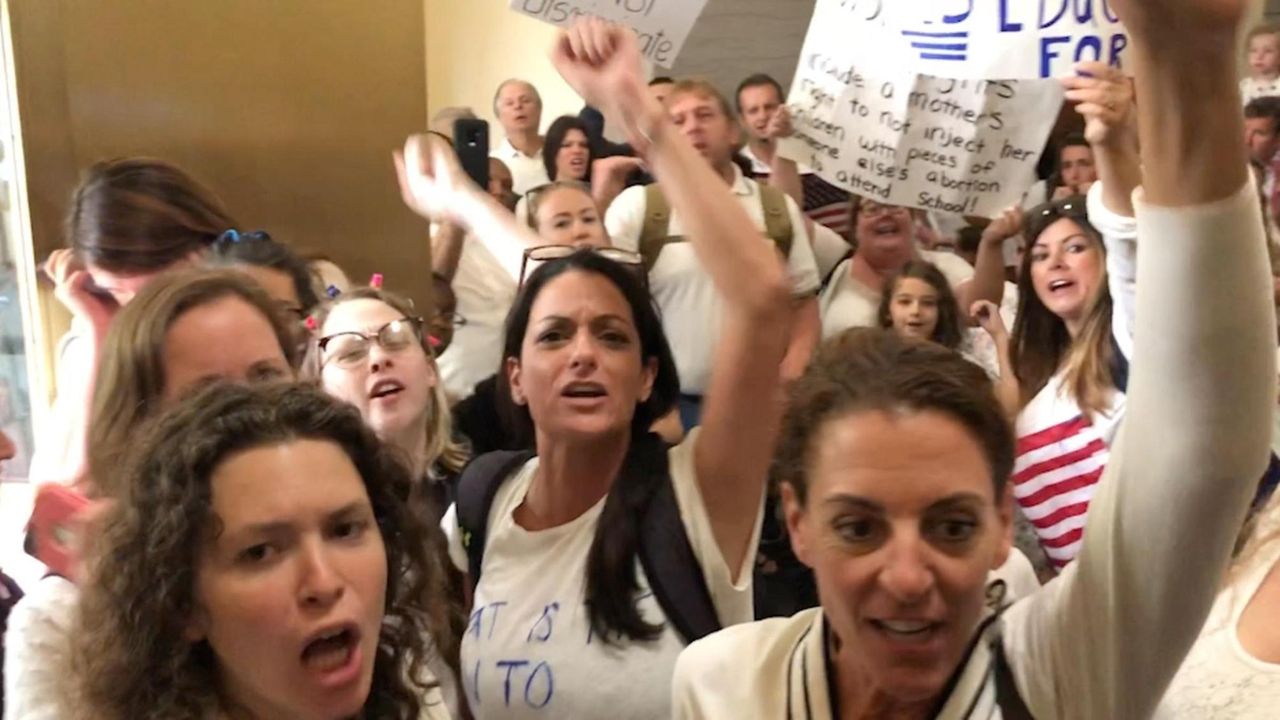 On Monday, hundreds of parents and others opposed to a state law tightening enforcement of vaccination rules jammed the state Education Department’s headquarters in Albany. Credit: Hans Pennink

ALBANY — A crowd of angry parents opposing a new state ban on religious exemptions from schoolchildren's vaccinations protested here Monday, as some authorities warned that local demonstrations might be looming on Long Island as well.

Thousands of parents statewide — many of them from Nassau and Suffolk counties — have been advised by local school districts that they must provide proof of their children's immunizations from measles, mumps and other diseases within 14 days of school openings. Families affected previously had obtained exemptions from inoculations on religious grounds.

The response to the state's legal shift from exemptions has been swift and vocal. At the state Education Department on Monday, hundreds of protesters — some chanting "No school, not cool!" — pushed their way through turnstiles and rallied in a hallway, despite pleas by security guards that they move to an auditorium set aside for their use.

State troopers and Albany police were called in, and the department's stately front entrances were chained shut temporarily, in a rare safety precaution.

Meanwhile, a monthly meeting of the state's Board of Regents, originally scheduled to begin at 9 a.m., was delayed about 40 minutes, while officials moved to restore order. Several leaders of the protest movement who were invited to the meeting exchanged words with board members briefly, but then quieted down after being told they would have to leave otherwise.

"How can you ignore us?" exclaimed one leader, Melissa Bordes, 35, of Mineola, a mother of two children, including one who attends public school. "We're begging … please help us!"

The Regents, who set much of the state's educational policy, note that the ban was adopted by the State Legislature and signed by Gov. Andrew M. Cuomo, and that their board has no power to reverse that decision.

"It's not in our bailiwick," said Regent Roger Tilles, of Manhasset, who represents Nassau and Suffolk on the 17-member panel.

In mid-June, lawmakers voted to abolish the exemption, following the worst measles outbreak in the nation in 27 years. Many of the cases occurred in New York State, concentrated in Brooklyn and in Rockland County.

Many of the demonstrators said the ban raised constitutional issues, including their children's right under state statute to receive a free public education. Lawsuits challenging the ban are pending in both federal and state courts.

Health professionals, on the other hand, have warned in recent months against the danger of epidemics, if increasing numbers of families do not vaccinate children.

"They don't have a right to put other people at risk," said Dr. Eve Krief, a Huntington pediatrician and chair of a legislative committee for the American Academy of Pediatrics. The group represents 67,000 pediatricians nationwide.

Meanwhile, one lawmaker on the Island cautioned of potential local protests as well. State Sen. Phil Boyle (R-Bay Shore), in a Sept. 4 letter to the Education Department, said local school officials needed state guidelines to help deal with such possibilities.

"Numerous school officials have reached out to me expressing great concern that acts of civil disobedience may take place by parents of unvaccinated children not permitted to enter schools," Boyle stated.

Representatives of local school administrators agreed that localities were bracing for confrontations.

"Now, we've got superintendents saying, 'What do we do if parents show up after 14 days and want to keep their children in school?' " said Robert Lowry, deputy director of the New York State Council of School Superintendents.

State education officials, speaking on background, said they were working with the state Health Department and another agency to issue more guidance to school districts on dealing with the new policy.

The choice of Monday's rally site seemed unusual. The Regents had not scheduled any discussion of vaccination policies, but rather had set aside time for presentations on statewide graduation standards and on school programs meant to help minority students.

Protest organizers acknowledged, however, that part of their rationale for site selection was that Regents' meetings are open to the public and often covered by the news media.

One demonstrator, Marica Sidik, of Riverhead, said she worried her daughter, Ava, 14, might soon be forced out of selective courses.

“She's taking all advanced classes. If she’s not able to continue her classes, that’s not something I can provide through home-schooling,” the mother said.

Because of limited space, most demonstrators were asked to watch the meeting via closed-circuit TV in a nearby auditorium. Many, however, after pushing their way through, stood outside the meeting, where their shouts and whistles could be clearly heard.