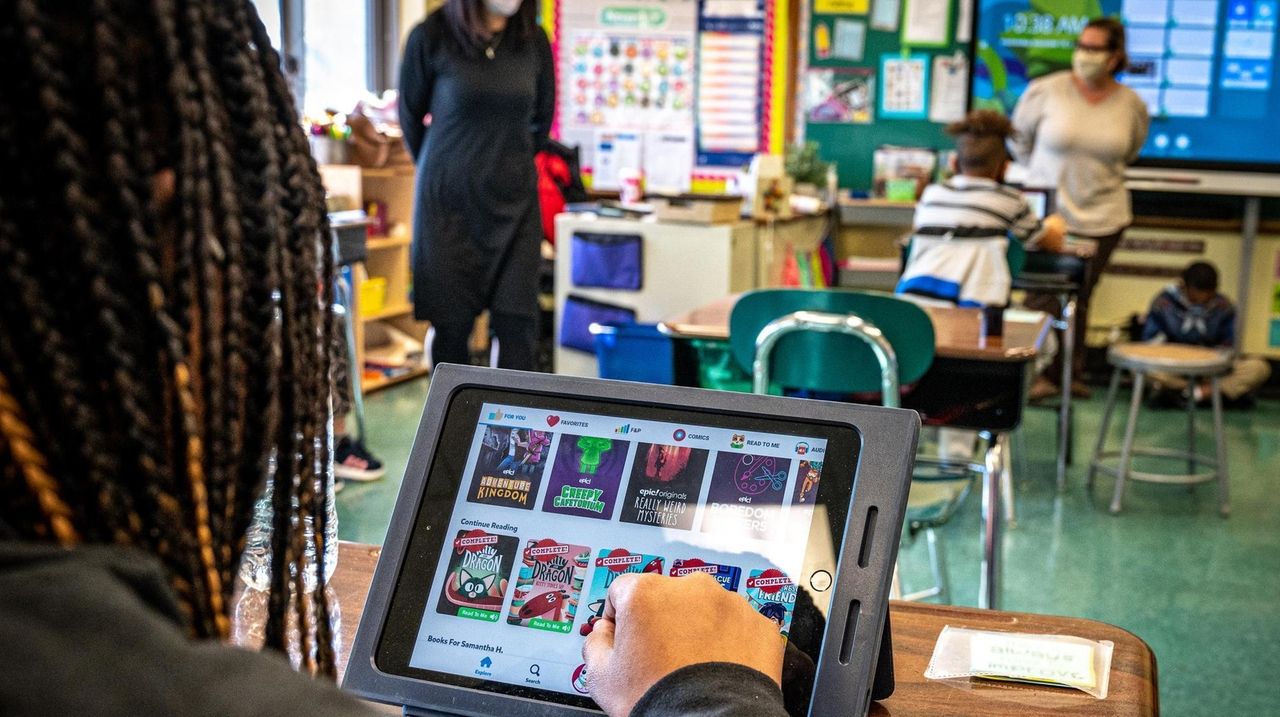 In the Elmont district, with six schools serving prekindergarten through sixth grade, about 46.6% of the 3,179 students started the academic year on a remote-only model, data shows. Credit: Newsday / J. Conrad Williams Jr.

This story was reported by Catherine Carrera, Joie Tyrrell and Michael R. Ebert. It was written by Carrera.

The majority of Long Island public schools started the school year teaching students both in-person and online under a hybrid model, while roughly 76,000 students — mostly from districts with high percentages of economically disadvantaged students and students of color — began on a remote-only path, according to a Newsday analysis.

Though the hybrid model addresses parents' concerns about the coronavirus pandemic, some said in interviews that virtual learning continues to be a challenge for their kids. Children are dealing with fatigue from hours in front of a computer screen, raising concerns about their mental well-being.

"They are trying to make a traditional school fit into the world we are living in," said parent Jessica Leavey, of Ronkonkoma, who has a daughter at Connetquot High School. "They are not going to be able to learn in the same way they learned in 2019."

About 61.4%, or 375 of 611 Long Island public schools, were using a hybrid model this fall, according to data Newsday obtained from the state Education Department via a Freedom of Information Law request. About 34.4%, or 210 schools, were in-person, and 4.3%, or 26 schools, were remote, the data shows.

The figures come from a survey conducted by the state Education Department in September, though about 10 of the Island's 124 districts did not provide data.

About 76,443 students — roughly 21.3% — have been following a remote-only model, spending hours each day learning in front of a screen or from instructional packets, according to data Newsday obtained from 108 districts across Nassau and Suffolk counties through public records requests. The 108 districts enroll 358,715 total students. Sixteen districts did not provide data to Newsday.

Most students on the remote-only path, whether because their school is only providing remote instruction or because they opted out of a hybrid or in-person model, live in districts with a high percentage of economically disadvantaged peers, Newsday found.

"It seems that the families that were underserved before the pandemic have also been underserved during the pandemic — and that creates an extraordinary educational equity risk for New York," said Ian Rosenblum, executive director of The Education Trust-New York, an advocacy group for students of color.

Wyandanch could be in that category. The district is considered the poorest on the Island in terms of taxable income and property wealth. The district's four schools — two elementary, a middle and high school — are operating under a hybrid model, but about 62.6% of the 2,737 total students opted for remote-only in September, according to Newsday's analysis.

"We’ve had to be dynamic and flexible with our families and our staff," said Gina Talbert, superintendent of the district. "It’s been a challenge for the teachers to have students learning virtually online while also having students learning in the classroom."

The number of students in a given district who opted for remote-only varies across the Island.

Shoreham-Wading River's four schools, including two elementary schools, a middle and high school, each began the academic year in-person. About 3.7% of 2,052 total students opted for remote-only, the data shows.

In the Elmont district, with six schools serving prekindergarten through sixth grade, about 46.6% of the 3,179 students started the school year on a remote-only model, the data shows.

In Farmingdale, almost 20% of the 5,440 students started the year on a remote-only model, according to the data.

Some districts, including Wyandanch and Elmont, recently sent surveys to families that initially opted for a remote-only model to gauge interest in returning their kids to the brick-and-mortar schools under a hybrid model. Other districts are surveying families to see if they would send their kids back full time starting in January.

The surveys come amid an uptick in positivity rates on the Island and statewide. Schools have temporarily shut down for days or weeks at a time due to positive cases among students and staff.

‘The fatigue is real’

Some education experts — now, more than eight months into the pandemic that forced schools to close and teachers to deliver lessons online — worry about fatigue among educators and students, as well as their general wellness.

"The fatigue is real because students at home are on the screen for many hours and there is fatigue in the classroom," said Audra Cerruto, associate dean and director of the Graduate Education Program at Molloy College in Rockville Centre.

Even those going to school in-person face a new set of stressors while learning behind a barrier, wearing a mask and keeping safe distance from their peers — a lot of pressure, especially for younger children, Cerruto said.

"Teachers are forging ahead to try and meet the learning outcomes for the grade level," she said. "However, teachers and administrators also realize that the social emotional component of learning is at the forefront."

Cerruto runs an online enrichment class for Baldwin students that has about 130 participants.

"I hope we can meet the learning objectives" in this new education environment, she said, "but I think the mental health issues and general well-being of our students are the priority."

She said though remote learning has improved since the spring, there are still challenges. Educators, for example, are teaching to two different audiences simultaneously, she said.

"There is a lot more work and prep going on when you have two different groups," Cerruto said. "I think teachers are excited to be back in the classroom and to be teaching live — but they are exhausted."

Leavey, the Ronkonkoma parent, left it up to her daughter Madeline to decide if she wanted to do full-remote or follow a hybrid model this fall at Connetquot High School, where she is a freshman. Her daughter chose hybrid, she said, and goes to school every other day.

"She wanted to see her friends," Leavey said. "She wanted it to be as normal as possible."

But her district didn’t supply all students with computers, so Madeline at times has to use her phone in school when doing assignments that require a laptop, Leavey said.

Leavey said she feels more attention should be given to students’ social and emotional well-being.

Kimberly Velentzas of Glen Cove said the biggest improvement to her son’s remote-learning days has been synchronous learning, which means a teacher is giving a lesson live to in-person students and those who are remote. Her son Harrison, 14, is a freshman at Glen Cove High School and follows a hybrid schedule.

"When my son is in math, whether in the building or home, he is on the same schedule and he is with the same group of kids," Velentzas said.

As some districts across the Island begin allowing students to return five days a week, Velentzas said she’s more comfortable continuing on a hybrid model. "For our family, this is a good compromise," she said.

‘The haves and have-nots'

Students from low-income backgrounds and students of color are disproportionately likely to be learning remotely this fall, according to a study from The Education Trust-New York.

Those students could face inequities and critical remote learning issues such as access to laptops and high-speed internet, as well as live instruction and extended learning, according to the study. Numerous students in such districts don't own a computer or have access to Wi-Fi.

"Parents of color and parents of low-income backgrounds were more likely to be concerned about the health and safety of sending their children back, and they also had less overall confidence in the education system," Rosenblum said, referencing a recent poll the group did of New York State parents.

Data continues to show that communities of color are disproportionately affected by COVID-19 across the country — and it’s reflected in Nassau and Suffolk counties, experts have said.

"Our families were hit very hard at the beginning of this pandemic, and that informed their decision to keep their kids at home," Talbert said.

In Nassau's Uniondale district of 7,059 students, about 90% of students are remote-only, Newsday's analysis found. The majority of Uniondale students identify as Hispanic or Latino and Black or African American, according to state enrollment data.

The high percentage of remote-only students isn't due to families opting out of hybrid or in-person, though. Remote was their only choice in most cases.

The district "made the difficult decision before the start of the new school year to remain closed and go fully remote for all scholars," other than prekindergartners, first- and second-graders, entering English language learners and special education students, acting Superintendent Rhonda Taylor said in a statement.

Remote students in Uniondale are following a synchronous model. The district gave more than 3,603 iPads and more than 100 mobile Wi-Fi hot-spot devices to students who needed them, Taylor said. "All students have access to a device and an internet connection if they need one," she said.

Wyandanch also has been able to distribute devices to students who didn't have any, partly thanks to donors, Talbert said.

"Eighty percent of our students have one-to-one devices," she said, adding that 900 additional devices have been ordered. Those without devices who are learning remotely have been using instructional packets, she noted.

"We’ve been really grateful for our donors who have stepped up to help us make sure that we close this gap of the haves and have-nots, and ensure that we have digital equity in the district," Talbert said. "Between the district and various donors, we will be able to close that gap."

The top five districts in Nassau and Suffolk counties with the highest percentage of remote-only learners.

SOURCE: Data based on a Newsday survey of 108 of 124 Long Island school districts

In person, remote or hybrid: How are LI schools teaching?The majority of LI public schools started the school year teaching students both in-person and online under a hybrid model, according to a Newsday analysis.