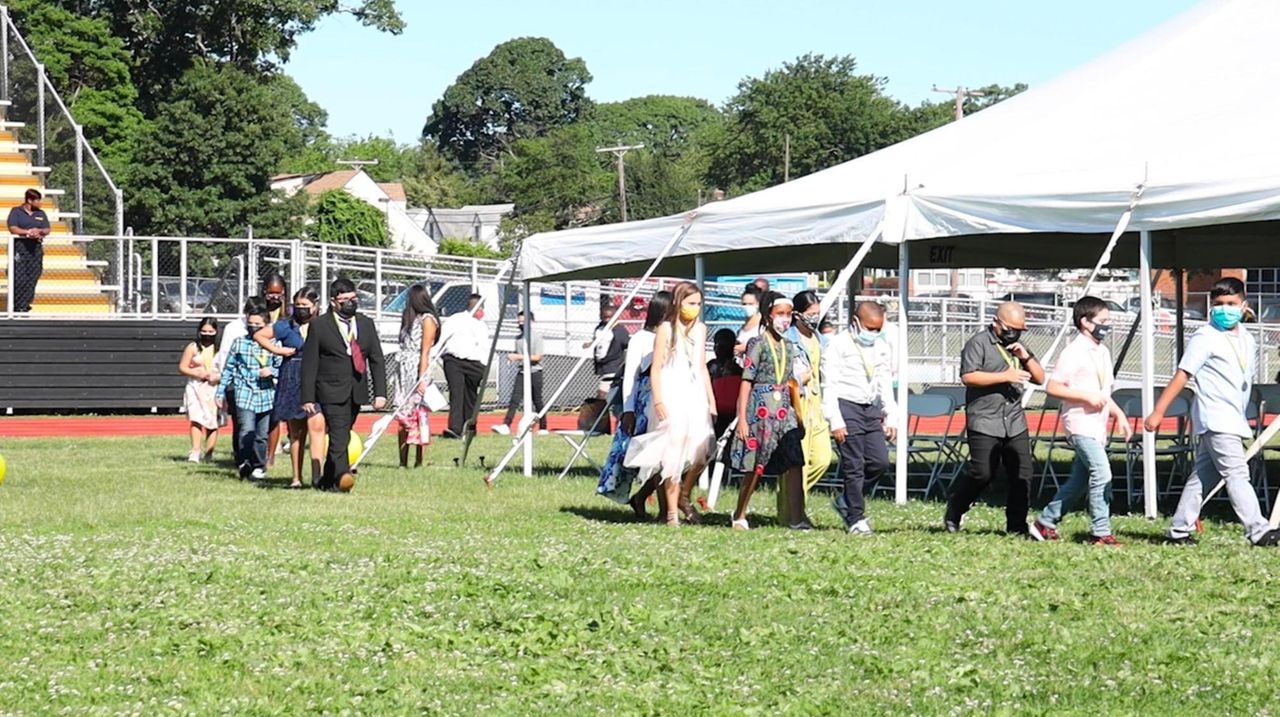 At Walnut Street elementary school in Uniondale, parents attending a "moving up" ceremony for their kids said they hope children will be in school full-time in-person in September. Credit: Howard Schnapp

Nearly 80% of Long Island students were learning "on-site" to end the school year, after most districts started last fall on a virtual or hybrid schedule, according to data analyzed by Newsday from the state’s COVID-19 Report Card.

The analysis, compiled from the June 16 Report Card, found that 79.1%, or 329,724 of students in the Island's 124 districts, were on-site in mid-June. More than 86,000 children Islandwide were categorized as off-site, or remote learners.

The majority of districts started the school year with a hybrid model — a mix of in-person and remote learning — and a Newsday survey in November found that roughly 76,000 students in 108 districts began the year on a remote path.

Nearly 80% of Long Island students were learning “on-site," according to data analyzed by Newsday from the state’s COVID-19 Report Card from June 16.

The Report Card is an online dashboard to track real time infections and testing operations of every school district, and includes estimates provided by districts on the number of on-site/off-site students.

The Newsday analysis found that 329,724 (79.1%) students Islandwide were on-site from data listed on the Report Card.

The Report Card said districts reported information as estimates and that it may not reflect actual daily attendance.

"Some parents decided that it was more important for them to send their kids to school, and some felt they wanted to keep them at home and [that] they could provide or complement what was provided by the school," said Robert Dillon, district superintendent for Nassau BOCES. "Some people were afraid of COVID."

The state's Report Card, an online dashboard, was announced in September to track real time infections and testing operations of every school district, and included estimates on the number of on-site/off-site students. Schools were required to report their numbers daily to the State Health Department, the agency that manages the Report Card.

The Report Card noted that districts reported information as estimates and that it might not reflect actual daily attendance. The data does not distinguish between remote-only, in-person or hybrid learners.

Several districts added days of in-person learning back to their calendars over the course of the school year, and a handful — such as Montauk — offered full-time in-person to start the school year. Months into the year, some districts eliminated the hybrid option, giving parents the choice to keep their children on a full remote schedule or return them in-person full time. Some systems also continued a hybrid model.

The analysis found four districts reporting 50% or more of its students learning off-site, while nine reported no off-site learners.

The Uniondale district eventually gave students the choice of full-time in-person or to continue as remote learners. More than 77% of students were learning off-site, according to the analysis.

Shakiva Harris, 37, of Uniondale, whose daughter Morgan Harris is going into the sixth grade, said the 11-year-old was a full remote student the entire year, and that it has been "difficult."

"Remote learning has been very difficult, but we overcame it, and it has been a pleasure to have teachers … who helped out a lot and made it an easier process," Harris said at her daughter's "moving up" ceremony from Walnut Street Elementary on Wednesday. "I'm so proud of her. I am so happy to see this accomplishment."

Education advocates had voiced concern that remote learning was more prevalent in low-wealth districts. A report in October from the State Education Department showed that while 7% of students statewide had access to full in-person learning, many more white students (13%) had in-person access than Black/African American (1%), American Indian (2%) or Latinx/Hispanic (3%).

The successes of remote and hybrid learning varied from district to district, educators said.

In Wyandanch, where the student population is nearly 100% minority, more than 72% of children were off-site to end the year, according to the analysis. The district offered a K-5 hybrid schedule, then expanded instruction on-site for K-2 students, while grades 3-12 participated in hybrid-asynchronous learning.

Superintendent Gina Talbert, in a statement, said the district "had one of the highest rates of COVID-19 cases in Suffolk County and one of the lowest community vaccination rates. Spacing challenges within our schools limited the number of students who could safely return to in-person instruction while the district remained in compliance with CDC [Centers for Disease Control and Prevention] guidelines.

"The district utilized all available human capital and ancillary staff to support classroom instruction in order to serve more scholars through in-person instruction."

In the Valley Stream Central High School district, many remote learners have been "thriving," school officials said. The valedictorian is a full remote learner, as the district gave children the option of full-time virtual. About half were listed as off-site, the Report Card noted.

The district is anticipating a return to full in-person instruction this fall and has implemented summer programs for students, said Christian Bowen, assistant superintendent for curriculum and instruction.

In Montauk, where schools have been open since September, only about 2% of the district's 345 students were listed as off-site to end the year.

"We offered remote only to students who had medical reasons why they could not attend," said Montauk Superintendent Jack Perna, who added that as the year went on and confidence in returning safely to the classroom grew, "Almost all of those students returned to full time. Parents preferred in-school programs."

Education leaders have said they want a full return to in-person instruction this fall.

"Educators know that being in-person is the best way for students to learn and for teachers to teach. We support offering full-time in-person instruction five days a week," said Andy Pallotta, president of New York State United Teachers.

Shanece Ellis, whose 10-year-old daughter Ziniya Edwards completed the fifth grade fully remote in Uniondale, said the pandemic has made her wary of a fall return to in-person schooling, but, "I am going to try for her because she likes to be around her friends."