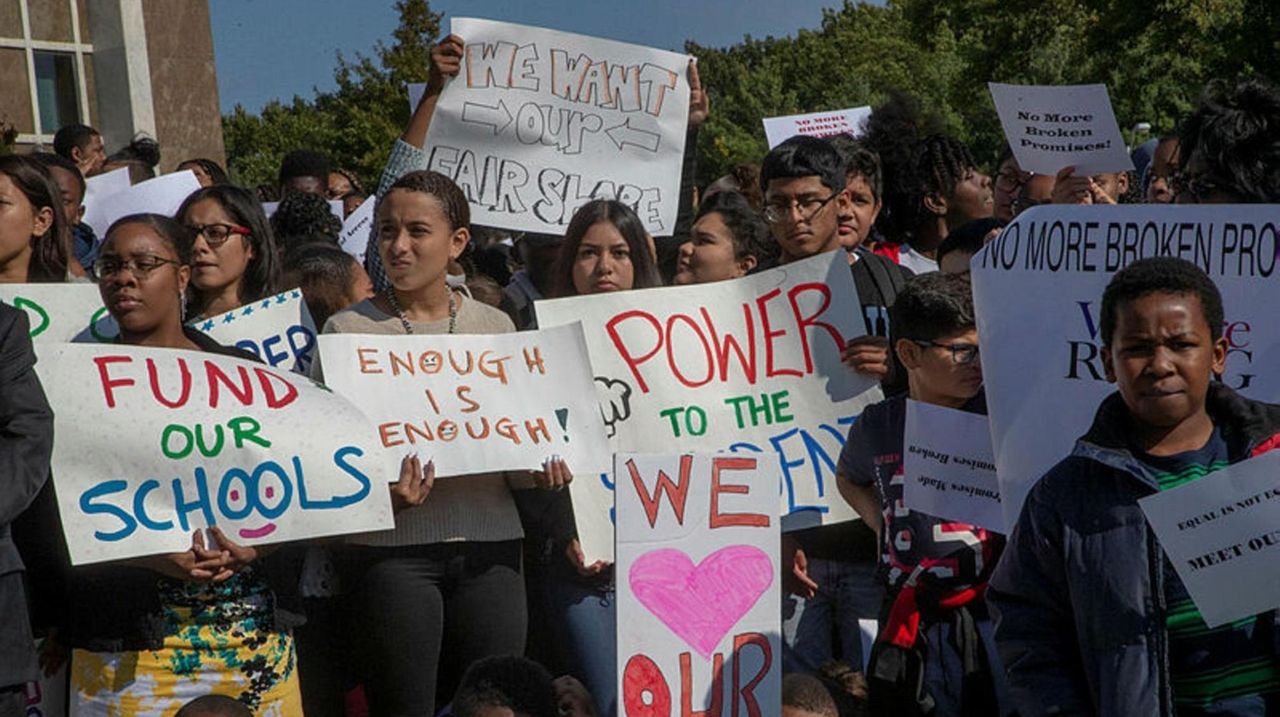 Hundreds of students, teachers and other supporters from a growing coalition of financially strapped Long Island school districts jammed a Tuesday rally in Mineola to underline their fight for additional state financial aid.

District leaders, who called their school systems a "coalition of the underfunded," demanded hundreds of millions of dollars in added support from Albany. Student representatives, meanwhile, protested what they described as overcrowded classes and curtailed school schedules.

The push for more education dollars is led by the Brentwood district, which announced in March that it would file a complaint with the U.S. Department of Education's Office for Civil Rights, charging state officials with shortchanging its mostly minority schools. Since then, five additional districts with similar demographics also have signed on to the drive.

"We're looking to make New York honest again," said Robert Troiano, president of the Westbury school board and one of the rally's main speakers.

Other districts represented at the Mineola gathering were Brentwood, Hempstead, Uniondale and Wyandanch. Central Islip also has signaled support.

Morris Peters, a spokesman for the state's Division of Budget, responded by saying the five districts represented at the rally had received aid increases averaging 48 percent since 2012 — 13 percentage points above the state average.

In Mineola, Christian Odom, 16, a senior at Brentwood High School, stood in the chanting crowd holding a protest banner, along with his brother, Matthew Odom, 14, a sophomore.

The older brother said if more state aid becomes available, he would like to see it used to provide his school with a ninth daily class period — something already offered in most districts in Nassau and Suffolk counties. He added that Brentwood High's eight-period day limits his access to desirable courses, especially in science.

"There are a lot of courses I'd like to take — forensics, for example — but I can't," Christian Odom said. "And l'd like to see my younger brother over there have more options than I did."

A target of coalition leaders is the state's Foundation Aid formula, which is the main vehicle used to distribute billions of dollars in school assistance.

Established in 2007, foundation aid originally was intended to boost assistance by a total of $5.5 billion over four years, with a focus on districts with concentrations of impoverished students. The commitment was partially met over the following two years, but then broke down in the wake of an economic recession.

The state continues to take a progressive approach in supporting poorer school districts. For example, the six districts supporting Tuesday's rally draw about 60 percent of their funding on average from state and federal sources, which is double the outside support afforded districts Islandwide.

Still, coalition organizers contend that 84 districts Islandwide would gain another $871 million in funding for 2018-19, if the original foundation pledge was fully met.

The planned civil-rights action, based on the idea that state funding discriminates against districts with large numbers of students of color, is similar to a case brought in 2013 by the upstate Middletown school district. A spokesperson for the U.S. Education Department said Tuesday that case remains under investigation.