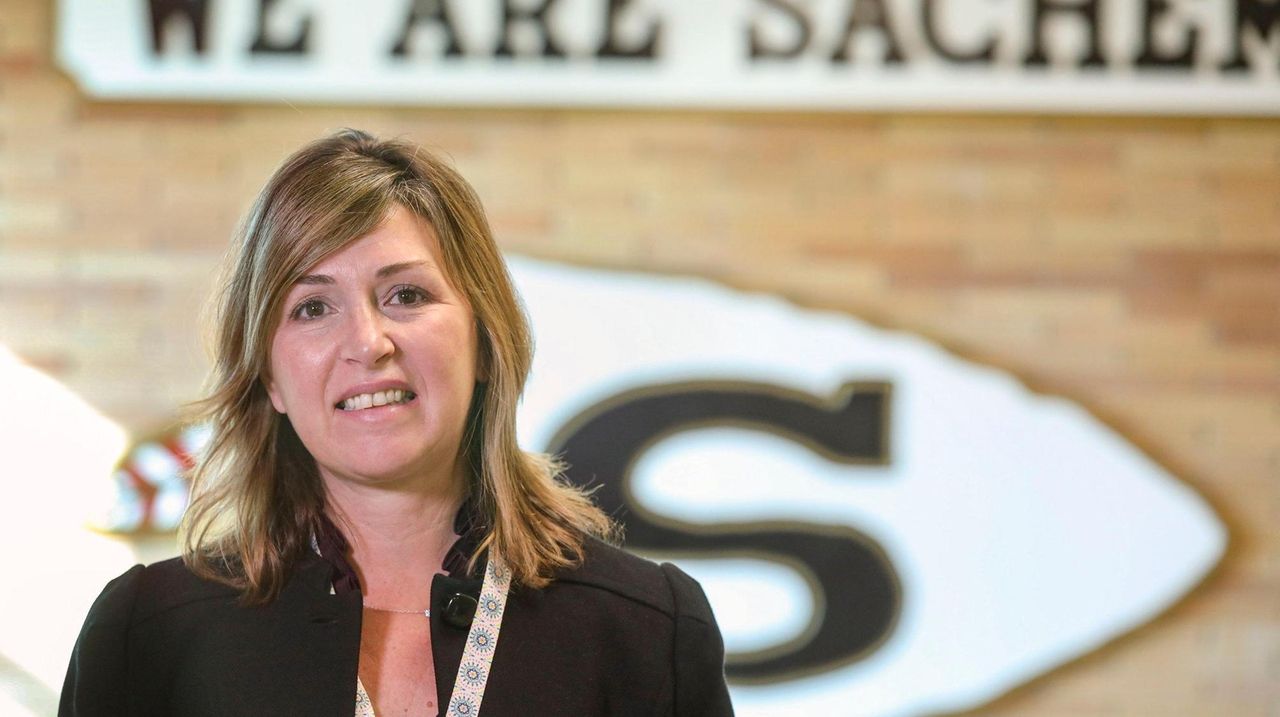 Erin M. Hynes, assistant superintendent for curriculum and instruction in the Sachem school district, spoke to Newsday about how the district is combating bullying and making sure students have the resources they need if they want someone to talk to. Credit: John Paraskevas

When Beatriz Morfogen found out she had tested positive for COVID-19, she felt scared, worried and sad. Not only because she didn't know how the virus would affect her, but because friends she once trusted began bullying her on social media.

"I was scared I was going to get really sick, and I felt like I let everybody down. Like everyone was going to hate me afterward," said Beatriz, 14, an eighth-grader in the Southampton school district who contracted the virus in late November. Once word got out that she had the virus, peers took to social media apps like TikTok to call her out, accuse her of being "reckless" and blame her for them having to quarantine, she said.

Some bullying experts said the increased time Long Island students are now spending online due to hybrid and remote learning has opened the door for more cyberbullying, a type of bullying that often goes undetected by adults or those who don't experience it directly.

Online bullying uses communication such as texting, or social media posts, to intimidate and threaten others, and "unreasonably and substantially" interferes with a student’s "educational performance, opportunities or benefits, or mental, emotional or physical well-being," according to New York State's Dignity for All Students Act, which is meant to protect elementary and secondary education students from all forms of bullying.

"COVID-19 has changed the landscape of our daily lives, and that includes the growth of a teen’s technology use, which allows for more opportunities to cyberbully," said Laura Grunin, a doctoral student at NYU Rory Meyers College of Nursing who recently led a study on cyberbullying. "Cyberbullying is anonymous, making it that much more dangerous."

Stratis Morfogen, Beatriz's father and a restaurateur in Manhattan, said his daughter "was tortured on TikTok and Instagram for three or four days. The bullying was 10 times worse than the virus."

Days before Beatriz tested positive, she attended an outdoor ice skating event with friends and socially distanced, Morfogen said. She shared phone numbers with contact tracers of others who were at the event, hoping it would help deter further spread of the virus, she said.

"But then a lot of people started getting mad at me even though I would never intentionally get anyone sick," said Beatriz, who experienced symptoms such as loss of taste and smell, chest pains and cold sweats. "I understand it was natural for people to freak out and panic, but some people were just so angry toward me, and they put it all online or talked behind my back.

"I felt really bad about myself those two weeks."

Study: 1 in 5 involved in cyberbullying

A 2020 study by the Cyberbullying Research Center found that one in five "tweens," children between ages 9 and 12, were cyberbullied, cyberbullied others or have seen cyberbullying.

"There is not a single profile of a young person involved in bullying," reads the stopbullying.gov website, managed by the U.S. Department of Health and Human Services. "Youth who bully can be either well-connected socially or marginalized, and may be bullied by others as well. Similarly, those who are bullied sometimes bully others."

About 17.3% of high school students in New York reported being bullied online in 2019, according to a High School Youth Risk Behavior Survey from the Centers for Disease Control and Prevention.

Nationwide, among students ages 12 to 18 who reported being bullied at school, 15% were bullied online or by texting, the survey found.

In the days before social media, bullying would take place in schools, hallways and playgrounds. But today's kids face bullying on their phones and laptops, where they spend most hours of their day.

"I had the benefit of being able to go home at the end of the day and being able to close the door. Unfortunately, kids today don't have that," said Joe Salamone, 33, of Farmingdale, who experienced bullying throughout his teenage years. Salamone founded in 2013 the Long Island Coalition Against Bullying, fueled by his own experiences and witnessing others getting bullied.

The coalition, funded by private donations and fundraising efforts and grants, provides community outreach, school assistance and personal development programs aimed to raise awareness and provide education about bullying and the effects of bullying.

"I think bullying and mental health is one of the impacts of the pandemic that we may not really deal with until months from now when things settle, and children are back in the classroom on a ‘normal’ routine," Salamone said.

Through its help line, 516-777-7709, the coalition offers a team of trained professionals ready to assist a family or child impacted by bullying, the website states.

"We saw an uptick in cyberbullying, particularly as we experienced the racial unrest of the summer in the wake of George Floyd, and again as we got closer to Election Day, with a lot more politically motivated cyberbullying," Salamone said. He anticipates another spike in reports, he says, once students are back to fully in-person school schedules.

Laura Campbell, education director at Long Island Crisis Center, said the issue of cyberbullying flies under the radar as most kids can post on social media using anonymous accounts.

"Unless you have been bullied or are bullying, this is something that’s often invisible," Campbell said. "Today's teens are a very private generation. They have learned to paint this image on the outside of who they want people to think they are. But inside, many of them are really struggling."

Even before COVID-19, students were reporting experiencing anxiety and depression, she said.

"COVID-19 has had a profound psychological and social effect, and it will persist long after the public gets vaccinated. There’s no vaccine for teen anxiety and teen hopelessness," Campbell said.

An NYU study led by Grunin, the doctoral student, shed some light on the root cause for bullies' aggressive behavior online. "We found that adolescents who perceive their parents to be loving and supportive are less likely to engage in cyberbullying," Grunin said.

When asked if their parents are loving, the youths who said "almost never" were over six times more likely to engage in high levels of cyberbullying as compared to those who said they were "almost always" loving, the study showed.

But not all educators predict a spike in cyberbullying.

With most teenage students on hybrid or remote learning plans, cases of bullying have declined in the Sachem school district, said Latisa Graham, the guidance director in the district.

"I feel that in light of the pandemic, students are a little more compassionate and looking at life in a different way," Graham said.

Kurt Baumiller, a guidance counselor at Samoset Middle School in the Sachem district, said he suspects bullying cases might be down because students are simply not in school full time.

"I think it’s a factor of half our population not being here on a regular basis," Baumiller said.

'Virus is our enemy'

Beatriz, the Southampton student, said her experience in November was the first time she dealt with cyberbullying.

"I was just really startled that people that I thought were friendly or trustworthy would say those things," she said.

"At school, we learn about cyberbullying, but I feel that social media has normalized attacking other people," Beatriz said. "You can be insensitive on social media and pass off as a joke things that are not nice or anything you would ever say to someone in person. But that's the thing, you’re not saying it to their face, you’re saying it to a computer."

Beatriz started an Instagram account called "Virus is our Enemy," where teens could message her and feel safe to share their stories of contracting the virus, she said.

"I've talked to around 30 people my age who said they also lost friends after they tested positive, and that they felt really alone during that time," Beatriz said.

Morfogen, her dad, said he wants parents and children to know that "getting COVID-19 is not the scarlet letter. Don't shun someone for testing positive. The true enemy is the virus, not each other."