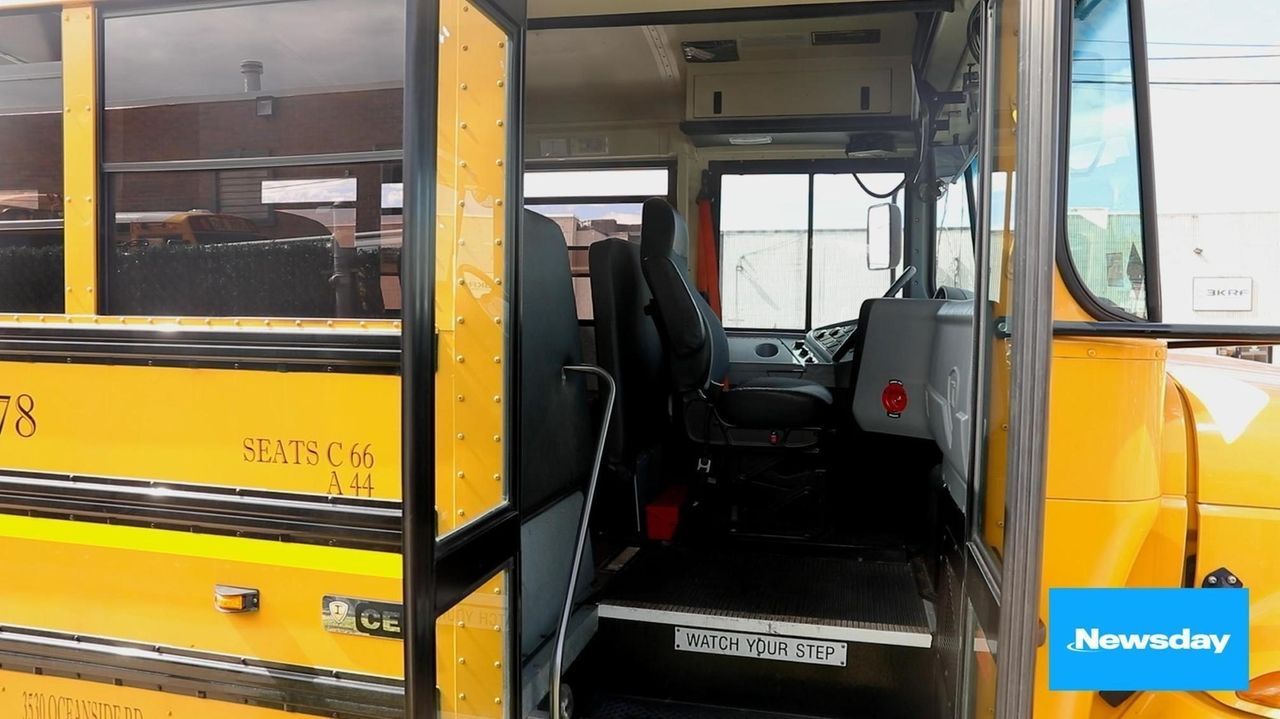 The ride to school this year has been a bumpy one.

Top school officials have described the labor shortfall as “unprecedented.”

In response, school districts have combined routes, and bus companies have stepped up their recruitment efforts by dangling sign-on bonuses in the thousands of dollars to lure new drivers.

In recent weeks, school districts have combined routes, and bus companies have stepped up their recruitment efforts by flashing sign-on bonuses in the thousands of dollars to lure new drivers. Some of the Island's districts run their own transportation operations, while others largely depend on private bus companies.

Corey Muirhead, president of the New York School Bus Contractors Association, estimated that Island schools are 15% short of their typical 5,000 drivers. Many drivers who were laid off last year, during the months when schools switched to remote learning, did not come back. Others decided to retire or not return this fall due to COVID-19 concerns.

More than half of the workforce are 55 or older, Muirhead said.

"We had many drivers that completely left the industry to go work for other companies like Amazon or FedEx and UPS. And why? Because during the COVID pandemic, those businesses were booming," said Muirhead, adding that drivers are reassured of the stability offered by "pandemic-proof" industries.

"Some districts have consolidated bus routes, eliminated late buses where student ridership was low, and when warranted increased the length of some bus runs," the statement read.

Greg Ostrowski, a driver with Suffolk Transportation Service, said the beginning weeks were normally a busy time for drivers like him, but this year has been "very, very busy."

"The shortages for me just means that there's less people that are coming, so more routes need to be covered, more pieces need to be slid into place," he said. "You need to take something that should be two routes and … combine them into one route."

Because the staff is spread thin, it has left little room to account for delays such as traffic or accidents on the road. Earlier this week, Ostrowski said he had to wait at a railroad crossing gate, which delayed the rest of his route.

"You are jamming the routes together because you're short of people," Ostrowski said. "One little thing affects all the schools and all the children behind them. So it's tough sometimes."

Paul Defendini, superintendent of Farmingdale schools, offered apologies in a Sept. 15 letter to the community over the delays in that district. He wrote that the national bus driver shortage and staffing inconsistency of the district’s contractor have led to problems "we have not experienced in my 15-year central office career."

"We expect problems every year during the first few days of school," Defendini wrote. "This year is different based on the gravity and persistence of these concerns."

Defendini declined Newsday's interview request and did not respond to questions on the frequency and extent of the delays.

The driver shortfall, however, goes far beyond Long Island.

It has gained the attention of Gov. Kathy Hochul, who said Sunday she’s directing state agencies to remove some regulatory barriers to allow applicants to get their commercial driver's license quicker. She also announced ramped-up outreach efforts to the state’s 550,000 license-holders.

The shortage came into sharper focus this month as working parents found themselves having to readjust their schedule to factor in delays, which vary from district to district. Muirhead said the delays he's heard about on Long Island range from 15 to 30 minutes.

Nigel Chen, of Syosset, said his son’s bus always arrived on time in the spring, but has been late — up to 20 minutes — in recent weeks.

"We need to spend more time at the bus stop to wait for the bus," said the father of a first-grader who attends South Grove Elementary School. "It's kind of annoying, but nothing too serious."

In some districts, the shortage has not delayed arrival or dismissal pickup, but affected after-school activities such as sports.

Laura Brothers, school transportation supervisor at South Huntington Union Free School District, said about 75% of the district's student transportation are operated by an in-house fleet of about 60 drivers.

"There isn't a district on the Island that hasn't felt the impact in some way," she said. "The athletic busing has been impacted tremendously by the driver shortage."

While the district’s in-house operation has stayed steady, Brothers said the companies the district uses to take students to athletic games could no longer make those trips until 4 p.m.

"They needed to bring children to and from school before they could get to the sports games," she said. "Now all the games have to be after 4 p.m. That's very difficult if you have a soccer field that has no lights or if it's an outside game and it's cold or if it's raining. So there are times where if you're moving games till after 4 o'clock, it's just not going to work."

Brothers said her district has tried to accommodate the change by using district drivers to transport students to games, but the challenge will grow once middle school sports start soon.

Transportation officials agree the solution is to get more drivers, but they differ on how to do so.

Busing companies are sweetening their job offers by dangling sign-on bonuses and higher-than-usual wages to applicants.

The normal average starting wage is about $21 an hour, said Debra Hagan, president of Transport Workers Union Local 252 in Islandia. So far this year, she has seen some offer as much as $26 an hour and sign-on bonuses as high as $4,000.

Muirhead said companies are spending more on recruitment. "On top of that, people are offering the biggest sign-on bonuses that I've ever seen in this industry," he said.

Hagan said monetary incentives to newcomers, however, could backfire on staff retention.

"The existing drivers of my union that drove all through COVID … are not getting any kind of incentive or recognition for coming back to the job, and yet they're offering a higher, better-than-starting wage for coming onboard, and a sign-on bonus," she said. "That has a lot of existing drivers disgruntled."

Robert Dillon, district superintendent for Nassau BOCES, called the strategy problematic because it leads to districts and companies competing for the same driver pool.

John Corrado, president of Suffolk Transportation Service, which buses students in 19 Suffolk districts, has seen a promising sign: an uptick in application flow in the past few weeks. But he said a full return to what it used to be would take time.

"I think, in a couple of months, we will be in a better place. That’s what I’m hoping," Corrado said. "It will probably be a project the entire school year … to catch up. [It’s] a big undertaking to turn the system back to 100%."

0:43
Ryder: Gunshot victim at crash site was targeted
Judge rules 10-year-old has to wear mask in school
Brookhaven white-collar workers' union to seek mediation for contract
Feds: LI therapists among 9 in $3.3M government scam
College enrollment down 6.6% over two years
All 18 seats in Suffolk Legislature up for election
Didn’t find what you were looking for?