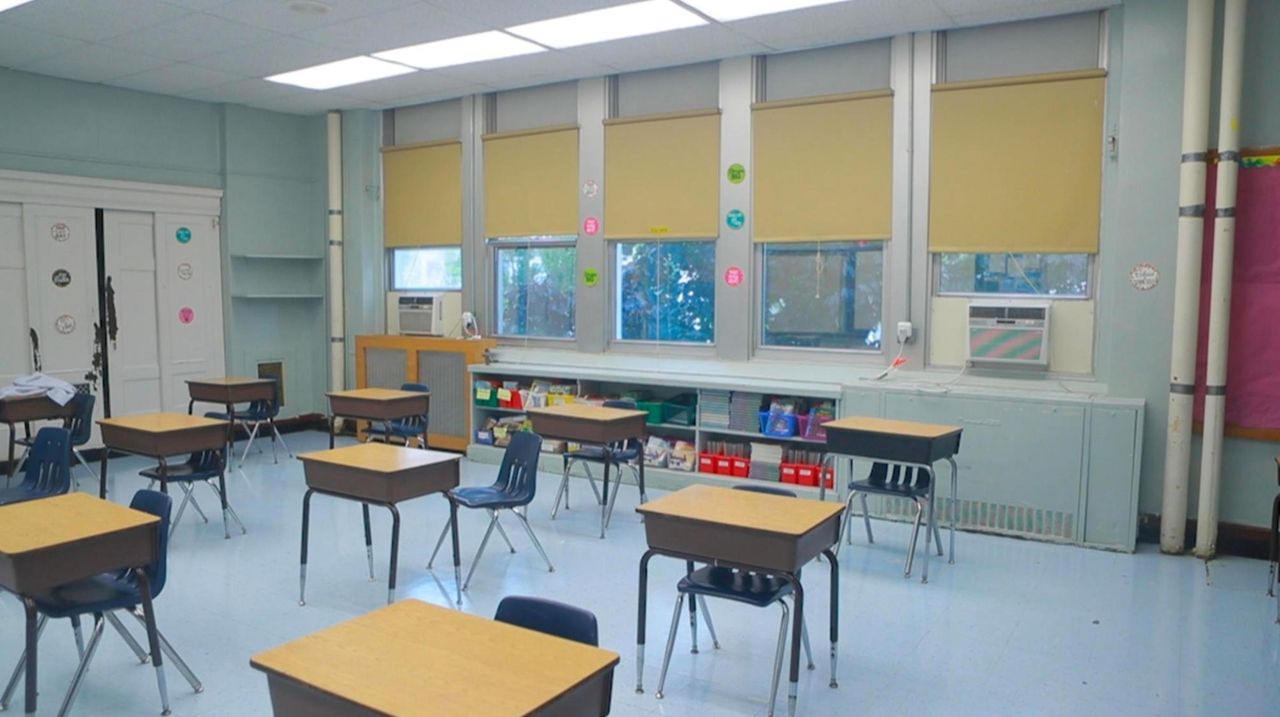 Cash reserves held by Long Island school districts have grown to more than $2.6 billion, but districts warn their financial cushion could soon evaporate if the governor carries out contingency plans to reduce aid by as much as 20%. Credit: Newsday / Raychel Brightman

Cash reserves held by Long Island school districts have grown to a record $2.6 billion, including money earmarked for dealing with emergencies such as the coronavirus pandemic, official records show.

Dozens of districts have told Newsday they may have to dig into reserves in the weeks immediately ahead, depending on two questions yet to be decided. One is whether schools will reopen in the fall; the other is whether they will get the state and federal funding needed to operate.

Gov. Andrew M. Cuomo has said he will announce sometime from Aug. 1 to Aug. 7 whether schools will reopen on Long Island and elsewhere across the state. He also has warned that he might reduce financial aid for schools, hospitals and local governments by 20% if the federal government does not provide states with additional fiscal relief.

Lawmakers in Congress have been negotiating another stimulus package.

How much money does your school district have in its 'rainy day' fund?

"Certainly, schools would tap into their reserves to the extent possible," said Lorna Lewis, a longtime Long Island school administrator and past president of the New York State Council of School Superintendents. "We're in the eye of the storm, awaiting a decision on state aid and on what the federal government will do to help us reopen schools. It's not an easy task."

School leaders, in interviews, cited the COVID-19 crisis and its economic disruption as a prime example of why districts must stockpile money as a hedge against the unexpected. The issue is controversial; a recent series of state audits criticized some districts for piling up reserves by overestimating future expenses and underestimating revenues.

The accumulation of funds has infuriated critics who contend that districts should apply more of their surplus money to provide relief for the Island's homeowners, whose tax bills are among the nation's highest.

Reserves come in three categories: funds set aside for long-range projects such as school construction and renovation, funds applied to current-year budgets, and so-called "rainy day" funds that can be used at districts' discretion to meet emergencies.

Total reserves accumulated by the 120-plus districts in the Nassau-Suffolk region have nearly doubled since the state began keeping records, rising from $1.33 billion in 2007-08 to $2.61 billion in 2020-21. Cash holdings, on average, equal nearly 20% of schools' projected spending for the fiscal year that began July 1.

Holdings vary widely, however, depending on districts' wealth. For example, Jericho, with many sleek office buildings within its tax base, has reserves equivalent to more than 46% of its annual budget. The corresponding figure is less than 4% in Hempstead, where taxable wealth is barely one-third the state average.

The great majority of districts on the Island — 109 — have banked the maximum amount of "rainy day" funds allowed by state law without restrictions on how that money is spent, a Newsday analysis found. Officially, that limit is fixed at 4% of annual budgets.

Educational leaders contend that reserves could quickly be exhausted, depending on what leaders in Albany decide to do next.

"The last thing anybody needs is a reduction in aid, because we're going to need more money," said Gerard Poole, superintendent of Shoreham-Wading River schools. "If there's an extra nurse, you need money. If you need extra technology, you need money. The list goes on and on."

Schools are ready with shopping lists for Reopening Day.

Masks and Plexiglas shields to protect students from coughing in classrooms are on order. Ditto for more electronic tablets for students working online at home, as well as spraying equipment known as "misters" used in sanitizing school buses. Extra substitutes could be needed to fill in for teachers who fall ill, along with tutors to help students who fell behind in their lessons during the 3 ½ months that schools were closed.

Classrooms, until recently designed to bring students together, now need to keep students apart. So, floor plans are being transformed. Gone are many of the conference tables used to encourage small-group discussions. Now it's back to individual desks — in this case, desks spaced 6 feet apart.

"I'm going to be putting the kidney-shaped tables in storage," said Dragone, assistant superintendent for business and administration. He referred to tables designed for small groups.

Dragone, who conducts an annual survey of district budgeting throughout the region, said one driving force behind the accumulation of reserve funds was the state's adoption of "cap" limitations on school property taxation beginning in 2012-13.

State law sets a base restriction of 2% or the inflation rate, whichever is lower, on annual increases in districts' tax collections.

"You're limited in what you can raise through taxes, and you can't count on the state to raise its aid, so the only way you can avoid potential cuts in programs is to use some reserves," Dragone said.

Like other school business officials, Dragone found that he had money left over at the close of the academic calendar in June. School closures in mid-March meant that much of the money went unspent for expenses such as busing and stipend payments to coaches and club advisers.

Dennis O'Hara, the Hauppauge schools leader, said his district saved about $5 million in canceled services that he was able to add to reserve accounts. Such money, he said, is essential as a hedge against sudden upswings in costs such as those related to teacher pensions. State pension funds are heavily invested in the stock market, and a market crash can drive up rates districts pay to pension systems.

"Essentially, we are planning for the long-term financial health of school districts, while wanting to continue the best possible programs for our students," O'Hara said.

Managing a crisis often requires not just one year of careful planning, but two or three years, school administrators noted. They cited the example of the 2008 market crash, which was followed by a federal bailout that allowed schools and other local governments to operate more or less normally for a year. But federal assistance eventually dried up, hitting schools with two years of state-aid losses, along with large-scale teacher layoffs.

"It would be nice to have something in the bank for next year and the year after," said Robert Lowry, deputy director of the New York State Council of School Superintendents.

How much money does your school district have in its 'rainy day' fund?Reserve funds are up to a record $2.6 billion across Long Island, and questions about state and federal funding could mean districts will dig into them soon.