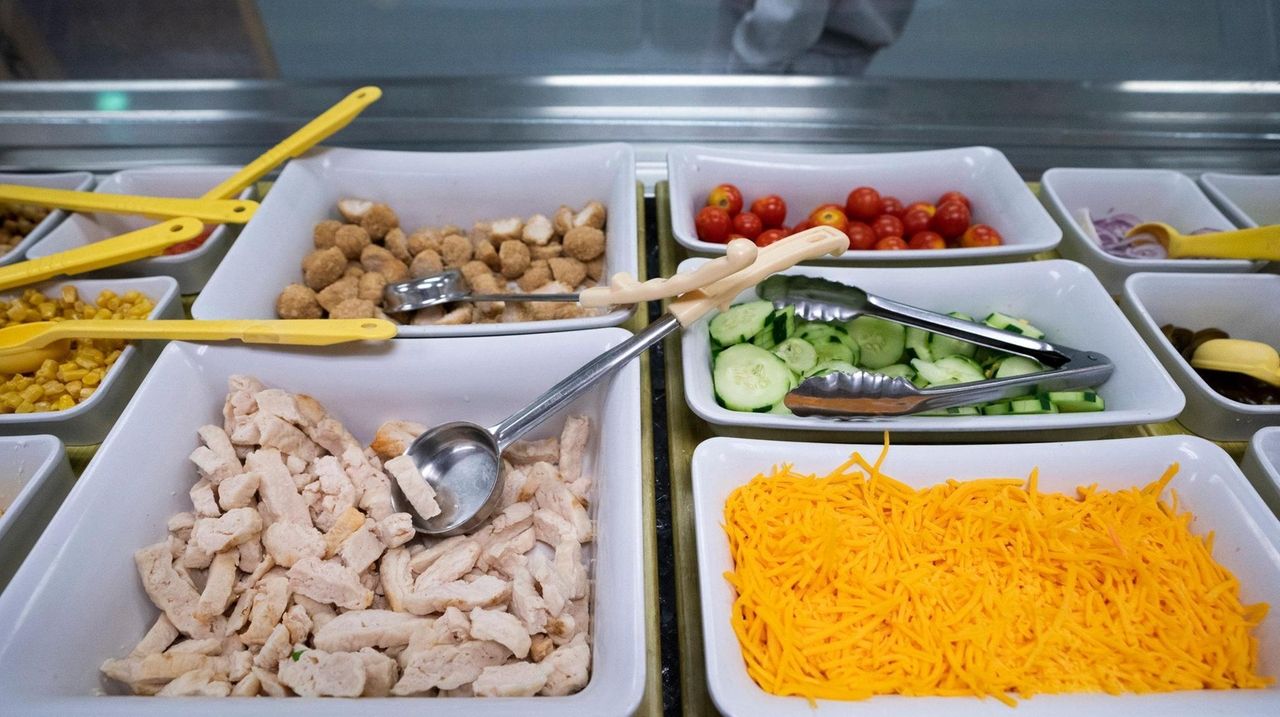 The nation's COVID-19 pandemic supply chain woes are changing Long Island's school cafeteria menus and what schoolchildren can — and cannot — eat for lunch.

Price hikes, delivery delays and shortages are impacting everything from breaded chicken and French toast sticks to pickled banana peppers, mozzarella sticks and cookies, and even sporks and trays, said Long Island school nutrition directors, whose difficulties are compounded by cafeteria staff shortages.

"For the first time ever, we are faced with a reality that the products are no longer available. We are having to cut out items that we’ve served to our students for decades," said MaryAnne Metzak, head of the Long Island School Nutrition Directors Association, which runs a purchasing cooperative that combines orders from 50 participating Island school districts to obtain lower prices.

Bottlenecks have rippled through the supply chain because of the COVID-19 pandemic, leading to shortages, delays and price hikes of many products.

Shortages in popular foods such as breaded chicken products and French toast sticks, and price hikes for many other items, are impacting school lunch menus. Lunchrooms are also short on staff.

The food supply could improve by early next year, but other delays could last for a year or more.

Bottlenecks have rippled through the supply chain for many products nationally, due to factories and processing plants slowed by COVID-19 cases and labor shortages. There are also shortages in shipping containers, railroad cars and truck drivers. Supply of some components and foods haven't caught up with surging or shifting pandemic demands.

Recently, the Biden administration announced that the ports of Los Angeles and Long Beach, California, which account for 40% of shipping containers entering the United States, would work around the clock, as ships have lingered for weeks waiting to dock and unload.

While nutrition directors hope to see improvement to the food supply within months, some of the other disruptions could take a year or longer to resolve.

Metzak, who is director of cafeteria services in the Copiague school district, said brand-name companies can't produce and ship the same amount of food as in the past. For example, Tyson Foods, a major chicken supplier, cited labor shortages and plant shutdowns due to COVID-19 and blamed a new type of breeding rooster it said led to fewer hatchlings.

"We get letters daily notifying us of products that are no longer available or that there is a significant price increase," Metzak said. "Our options are extremely limited, and we are having to become very creative to make appealing menus."

"I’ve had more parental complaints in the form of emails this year than I have ever had," he said. "They’re not happy, kids getting the same choices day after day. They don’t think it’s a healthy menu."

Lunches in the district’s elementary schools offer "very limited choices," Murphy said. Lunches of pizza and two types of sandwiches must be prepackaged and delivered to classrooms where students eat as part of pandemic protocols.

"Instead of the students having six or eight choices, they’re getting two or three choices," Murphy said.

The lunches do include fruits and vegetables, even if they are not shown on the menu due to uncertainty over what will be available day to day, Murphy said. "I tell them we’re doing the best we can … we’re exploring our options every day to make it better," he said.

Cost 8-13 cents apiece in some districts and are often unavailable.

Sweet potato cinnamon buns are being used as an alternative, costing 19 cents apiece.

The dissatisfaction over food has grown heated and public in some districts.

The Brentwood district, which serves 11,000 lunches and more than 7,500 breakfasts daily, responded to recent angry complaints from parents over the quality of grab-and-go lunches by adding choices including a hot entree, Superintendent Richard Loeschner said. Shortages overall, he said, were dealt with by keeping menus flexible and constantly calling vendors for available products.

"You have to be aggressive, ask what they have and build menus around what they can send us," he said, noting that the district served chicken recently. "When we get an opportunity, we over-order and pack our freezers."

"We’re already getting pushback from food distributors that gave us a price established, but now those costs are up for debate, given increased food costs," said Walcott, who is an area director for the state School Nutrition Association. "There is that conversation: 'We can’t get it to you at the negotiated price, or we can’t get it to you because we don’t have it.' It’s not happening across the board, but we’re seeing more and more of that conversation occur.

"Overall, the general consensus is if this is how we’re starting, it’s not looking so good going into the winter. There’s no assurances it will get better," Walcott added. "The worst of it I think is coming."

While no students are going hungry, he said, their choices may not include some favorites. Chicken can be especially hard to find, although it does show up on menus, just not as frequently. Chicken tenders were on the menu in the Longwood district on Wednesday.

Metzak said all districts long have offered a variety of breaded chicken items, and their absence is cause for dissatisfaction. "This has been one of the biggest complaints from parents," she said. "We are having to serve other protein options that are not our students’ favorites."

Used to cost $140 per 42-pound case with the distributor bid price, often unavailable.

Turkey meat, another popular alternative, and cheese products also soon could be in short supply, Metzak said. "This makes it very difficult to even provide a simple sandwich as an alternative," she said.

Prices are going up for breakfast foods and whole grain products as well, Metzak said. "As we continue to receive notices for price increases, we unfortunately have to accept them, as the supply of items is so limited. Many schools are going to struggle with maintaining a break-even budget this year," she said.

Used to cost 17 cents apiece, with the distributor bid price.

Now cost 25 cents apiece, the price on the open market.

School districts contract with a food service company to run the breakfast and lunch programs, or manage their own food service, Walcott said. Costs, not including labor, are up from the $1 to $1.50 per plate for a lunch, he said.

Food service programs are supposed to be financially self-supporting and rarely draw funding from the school district's general budget, so the programs cannot easily raise wages to attract workers, he said.

Murphy said the Longwood district’s food service was "suffering major labor shortages. I’m right now in the process of filling 15 to 20 open positions. Typically, I would have 85 to 100 food service workers. Right now, I’m at 65 to 70." He said since COVID-19 hit, some older workers were afraid to return to work, while others moved on for other reasons.

"We really never laid anybody off," he said, noting the district has continued to feed students through the pandemic. Staffing shortages caused by departing and retiring workers could be managed when classes were hybrid and fewer students were on site each day, Murphy said. Now, with classes fully in person, the staff is stretched.

In response to the new conditions, lunch managers are exploring solutions, from bolstering inventories to buying food on the open market.

The cooperative members, Walcott said, will respond by "diversifying and stockpiling what we can get, because of possible shortages down the line … canned foods, frozen foods. Dried goods, pastas, rices, beans … pastas, we can stock up on. That’s a flexible meal item we can play around with a number of ways."

Murphy is asking distributors for letters stating how much manufacturers have raised their prices to distributors. "I will agree to pay the same percentage markup," he said, adding that he is being told distributors are waiting for products as well and that manufacturers are saying things could improve by January.

Until then, "We’re having to purchase on the open market to make up shortfalls, usually at a higher price. Some of it is not available. We’re having to do without some things and making menu substitutions weekly if not daily."

All the districts, Murphy said, are "fighting for the same product that becomes available." Recently, he ordered 40 cases of sporks and was told another district had ordered 1,000 cases. He thinks his order will be filled, but after that, the "price will jump from $14 a case to $24 a case, if they can get them."

The price could go as high as $24 per case, if available at all.

If sporks are no longer available or affordable for students, he said, "Then we’ll go to what is available. Normally we’d use a wrapped spork with a napkin in it. If I can’t get that, I’ll go to unwrapped, then a fork, and last but not least it would be a spoon."

After that, he added, "They’re left with their fingers."

Federal, state money on the way

Financial help is coming, as the U.S. Department of Agriculture recently announced a $1.5 billion allocation to help districts deal with supply chain costs and shortages. That includes $1.1 billion approved earlier this year to defray costs from early in the pandemic and now will help pay new expenses. The funding also allows districts to offer free lunches to all students for the 2021-22 school term.

The state Education Department "is in the process of distributing approximately $73.2 million in Emergency Operational Costs to New York Child Nutrition Program operators," the department said in a statement. In addition to funding, nutrition regulations were made more flexible in light of the shortages and delays to allow substitutions for scarce products.

School district administrators said they are doing what they always do: "We work with our team," said Phyllis Harrington, superintendent of the Oceanside district and president of the state Council of School Superintendents.

Instead of automatically including a fruit with a meal, "Now we ask what fruit they would like so we’re more sure they’ll eat it," she said. If a meal is short a bun, the food directors find a different starch or provide a different type of meal.

"Our goal is to make sure no child goes without food and goes hungry," Harrington said.