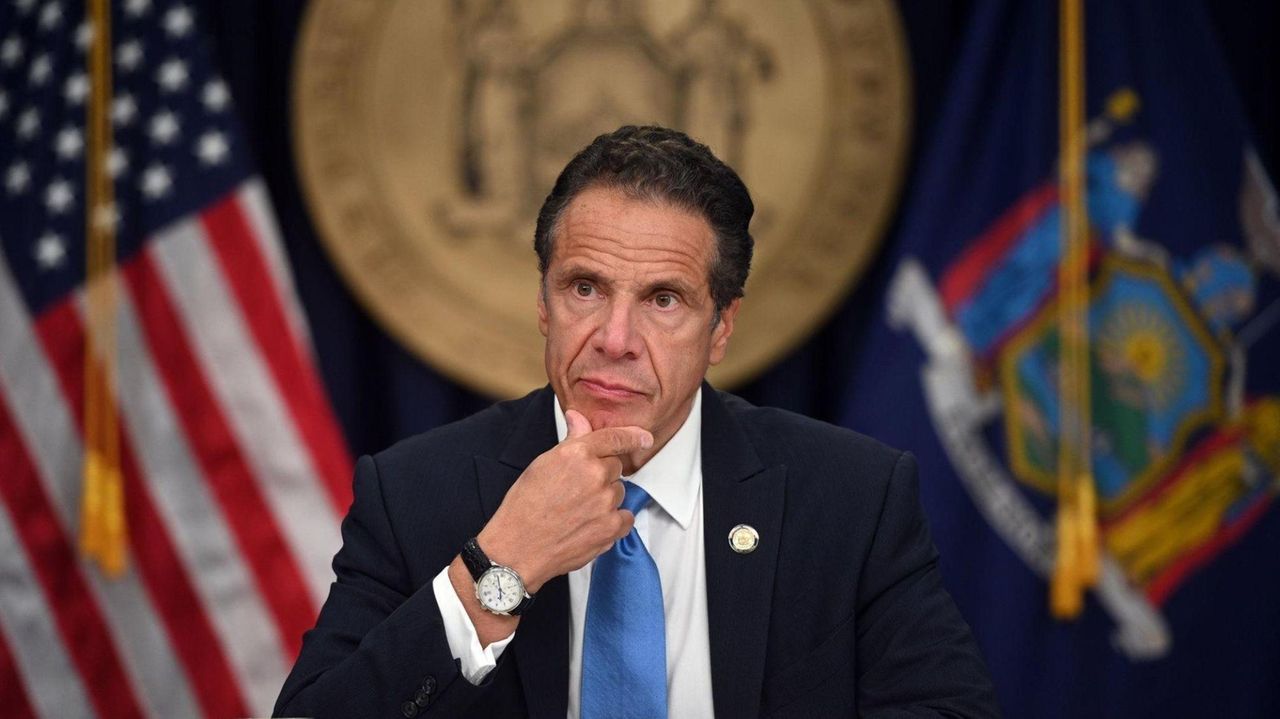 "They're all authorized to open," Gov. Andrew M. Cuomo said, adding that the decision is based on the viral infection rate and can change if there's a spike. Newsday's Steve Langford has the story. Credit: Newsday, Kendall Rodriguez, and Howard Schnapp / J. Conrad Williams, Jr.

This story was reported by Catherine Carrera, Joie Tyrrell, Craig Schneider and Bart Jones. It was written by Carrera.

New York students can return to their schools next month if their district plans have been cleared for in-person instruction, but not before local district leaders meet virtually with parents and teachers to address their concerns, the state said Friday.

"They're all authorized to open," Gov. Andrew M. Cuomo said in a telephone conference call, adding that the decision is based on the viral infection rate of 1% and can change if there's a spike. "If there's a matter of concern in the infection rate, then we can revisit it. But for planning purposes, they can reopen."

New York’s decision comes as major cities throughout the country, including Los Angeles and Chicago, have opted for online classes only. It also represents a huge turnaround from New York’s status as a global epicenter of the pandemic. The state shut down schools in mid-March to prevent spread of the coronavirus, sending home about 430,000 K-12 students from across Long Island's 124 school districts.

Cuomo said he was "deluged" with phone calls and messages from parents and teachers on both sides of the debate over whether to resume in-person instruction. He said it's up to local districts to decide on a return to instruction using an in-person, hybrid, remote or other model.

"The local district has to come up with a plan, and they have to deal with their parents and teachers," Cuomo said. "There's a significant level of anxiety and concern."

To facilitate dialogue, districts must meet virtually with parents three times by Aug. 21 and at least once with teachers, Cuomo said. New York City districts need to meet with their parents five times, he said.

He said it is critical for districts to get both groups onboard with their plans.

“If the teachers don’t come back, then you can’t really open the schools,” Cuomo said. “If the parents don’t send their students, then you’re not really opening the schools.”

Districts also are required to post individual plans on their websites for COVID-19 testing, contact tracing and remote learning. The remote learning plans must specify how the district will address any disparities in the district with technology, which some schools faced in the spring when they were forced to shut down.

Scott O'Brien-Curcie, president of the Wyandanch Teachers Association, questioned the way Cuomo handled the review of reopening plans, leaving it up to the state Department of Health to approve those plans.

"I have to wonder why Gov. Cuomo made 700 school districts develop plans, not really look at them and then pass it on to the DOH," O'Brien-Curcie said. "It seems as though this was a pass-the-buck moment."

Despite the task ahead, Joshua Crane, head of the private Stony Brook School, welcomed the move to reopen. Some private schools in the region were asking for the opportunity to manage their reopening separately, even if public schools faced delays.

“We applaud the governor’s decision to continue the restoration of New York State through the opening of schools — a critical step in the recovery process," Crane said. "This is the news our parents have been waiting for, and we are eager to return our students safely to campus.”

Some district leaders said Cuomo's mandatory virtual meetings with parents and teachers were already in the works.

"There's such diverse need among families and teachers, and everybody needs to be heard," Lawrence Superintendent Ann Pedersen said Friday. She was planning to hold virtual forums with parents of the 2,500 students in her district.

"We are giving flexibility to school districts. There was no one-size-fits-all" reopening plan, Cuomo said.

Some school leaders said they weren't surprised with Cuomo's decision to authorize reopening based on the low infection rate, though they would have liked clear instructions regarding contact tracing and testing.

"Specifically related to health and safety, it would make it a lot easier for there to be a firm directive, 'This is what all school districts must do,' " Huntington Superintendent Jim Polansky said. "Nevertheless, we have designed a plan we believe is in the best interest of our school community."

The initial decision to authorize schools to reopen comes after most Long Island districts submitted reopening plans to the state and shared those plans with parents.

Across Nassau and Suffolk counties, 17 districts requested an extra week to submit their plans to the state. After reviewing district websites and checking with each district, 16 since have submitted or planned to submit their plans by Friday. The Hauppauge school district of about 3,300 students did not have a reopening plan posted on its website Friday afternoon and did not respond to requests for comment.

Cuomo said 127 of 749 districts statewide have not submitted plans to the health department, which they were required to do by July 31. He said 50 districts' plans were "deficient." Requests for more details on those districts were not immediately answered Friday.

Some districts, including Three Village, Shoreham-Wading River and Rocky Point, have recommended a full return to in-person instruction either for K-5 or for all grades. Other districts, such as Huntington, Lawrence and Smithtown, have announced a return to school using a hybrid model.

In the Malverne district, students in grades K-5 are scheduled to return to the classroom five days a week, and grades 6-12 will go every other day, Superintendent Lorna Lewis said. Students who are medically fragile or vulnerable will be given the option of remote learning.

“We were awaiting it,” said Lewis, of the governor’s decision. “Because we couldn’t go forward with any plans … what he did today allows us to move forward.”

New York State United Teachers president Andy Pallotta said educators are concerned about specific procedures for closure, testing and contact tracing in the event of a COVID-19 case in a school.

"Right now, there may be some areas where parents and educators are confident in their district’s plan, but in many others, we know they aren’t," Pallotta said in a statement. "No district should consider themselves ready to reopen buildings until their plans are safe and everything in that plan meant to keep the school community safe is implemented."

For the Lawrence district, testing will pose "quite a challenge," Pedersen said.

"We don't foresee putting students in an isolation room where they'll get tested while they're in school," she said. "We're going to coordinate with testing sites so parents have resources on where they can go to get tested."

On remote learning, Pedersen said the district, with an 80% poverty rate, partnered with T-Mobile before the pandemic to provide students with Chromebooks and hot spots.

"We have a very high-needs population, but we didn't have that challenge of a digital divide, thanks to the partnership," Pedersen said, adding that teachers also gave live instruction to students.

Cuomo in recent days has repeated that parents ultimately will make the decision on whether students return to the classroom. "This is not really a bureaucratic decision, it's a parental decision," he said Friday.

One parent, Jenna Prada, 37, of Huntington, said she feels inclined to let her daughter, Lili Fey, 7, go into the school building for second grade. She said she believes the schools will do the right thing, as the issue is “such a huge liability.”

Prada said she still needs to get more information about the pre-K plans for her son, Andre, 4, before making a decision on whether to send him into a school building.

Cuomo had said that if the infection level in New York was below 5% the first week of August, he would authorize reopening. The state reported a 1% level of new positives from test results Thursday, a level it has maintained for weeks even as infection levels surge around much of the country.

Face coverings will be recommended — and requiredSchool districts will recommend face coverings be worn at all times and require them to be worn any time or place that individuals cannot maintain appropriate social distancing. Panelists say health protocols a priority before school startsSchool officials must address issues such as child care, health protocols and some students' lack of access to technology before the first full academic year in the COVID-19 era begins, panel members in a Newsday webinar said Friday. NY containing virus despite national 'sea of spread,' says CuomoStill, Cuomo called on local authorities and police to do more to enforce coronavirus-mitigation regulations such as social distancing and crowd limits. Eight LI school districts have until today to submit reopening plans, state saysOf 17 districts on Long Island that were granted one-week extensions of the July 31 deadline, eight have not yet posted their plans.