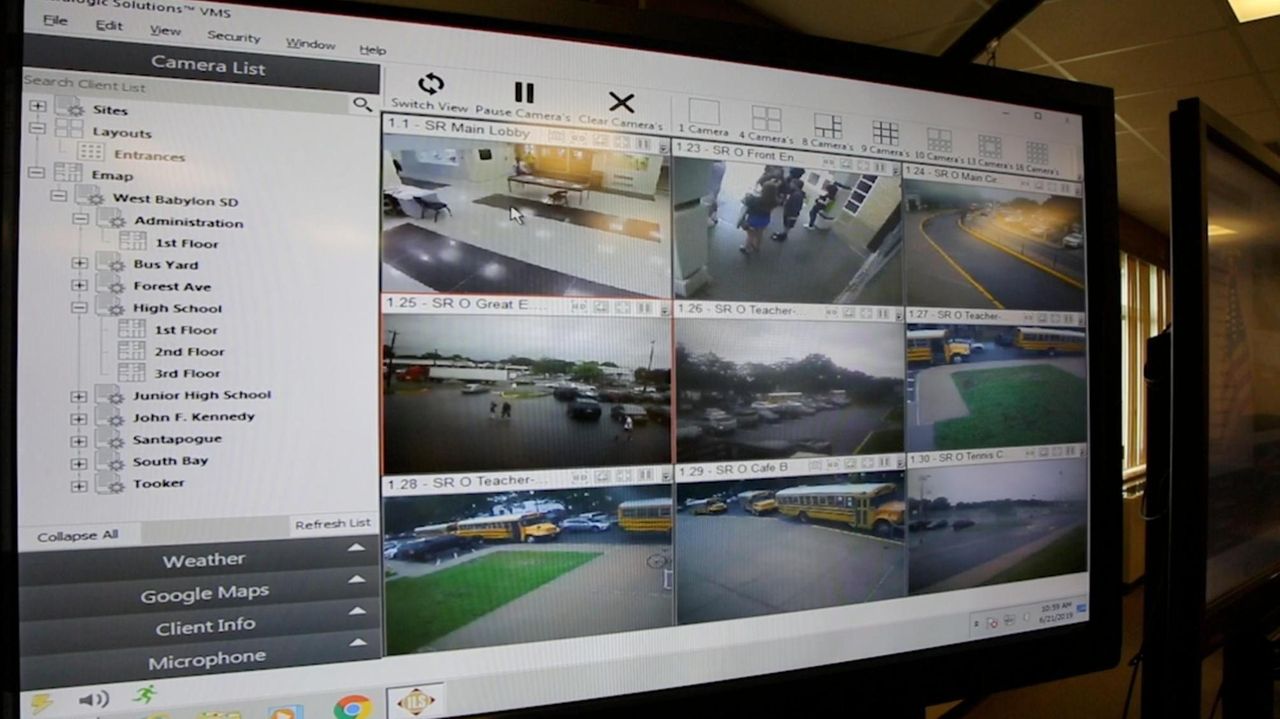 Suffolk County officials on Friday said a program that allows police to see into schools by providing access to existing security cameras will be up and running in some districts when classes start again in September. Credit: Barry Sloan

Suffolk County police will be able to access schools' existing security camera systems in case of an emergency in some districts this fall, County Executive Steve Bellone announced Friday.

The S.H.A.R.E. initiative — Sharing to Help Access Remote Entry — is designed so that school districts can connect their camera systems directly to the Suffolk County Police Department. Police then would receive real-time video camera feeds, maps and images from schools, allowing them to watch and track where an active shooter or other intruder is in a school.

Police officers could be directed toward specific entry points and locations in a school building, officials said. Police also would be able to share information with other first responders and be better equipped to coordinate rescue efforts.

"This connection will provide law enforcement the enhanced capabilities needed to respond more quickly," Bellone said. "We now have the tools in place to reduce response time."

Officials did not have an estimate Friday of how many of Suffolk's 68 public school systems have signed on to the initiative. Yiendhy Farrelly, the West Babylon schools chief, and Elwood Superintendent Kenneth Bossert said their districts will have the program up and running by the time school begins in September.

Hart, citing privacy concerns related to the use of schools' video cameras, said police will only access the cameras during an emergency.

That access would enable "responding officers with the description and location of the threat, which would be vital to apprehending the person and stopping the threat," she said. In addition, the initiative works well with districts that have electronic access controls, with doors that can be remotely locked and opened.

School safety and security have remained at the forefront of education-related issues on Long Island, especially since the Feb. 14, 2018, shooting at Marjory Stoneman Douglas High School in Parkland, Florida, in which 17 students and staff were killed and 17 others injured, and the May 18, 2018, shooting last year at Santa Fe High School in Texas that left 10 people dead and 13 injured.

Districts across the state and the Island have spent millions in security upgrades, including hardening of entry points in buildings. Several school systems on the Island, including Massapequa, Hauppauge and Miller Place, have approved plans to add armed security guards to their campuses.

Many districts already have closed-circuit television systems throughout their buildings. The software for the S.H.A.R.E. program was provided to the county and police by the Massapequa-based company that developed it, IntraLogic Solutions, and there is no cost for schools to sign up.

In addition, nearly all public school systems in both Suffolk and Nassau counties utilize the RAVE app, a smartphone system that allows teachers and administrators to call 911 and simultaneously alert other authorities about an active-shooter situation or other emergency event.

Bossert, who also is president of the Suffolk County School Superintendents Association, said he anticipates other Suffolk districts will sign on with S.H.A.R.E. The contract between the schools and the county police must be approved by a district's school board, and proposals have been shared with all superintendents in the county.

Bossert said the agreement addresses privacy concerns, specifying that police access to the cameras will be allowed only during emergency situations to alleviate "concerns about police surveillance during the day-to-day operations of the school."

Nassau County police said Friday they have agreements with some districts allowing law enforcement to access schools' camera systems. In addition, all 56 districts in Nassau participate in the RAVE program to immediately contact police through the communications bureau that prioritizes the calls.