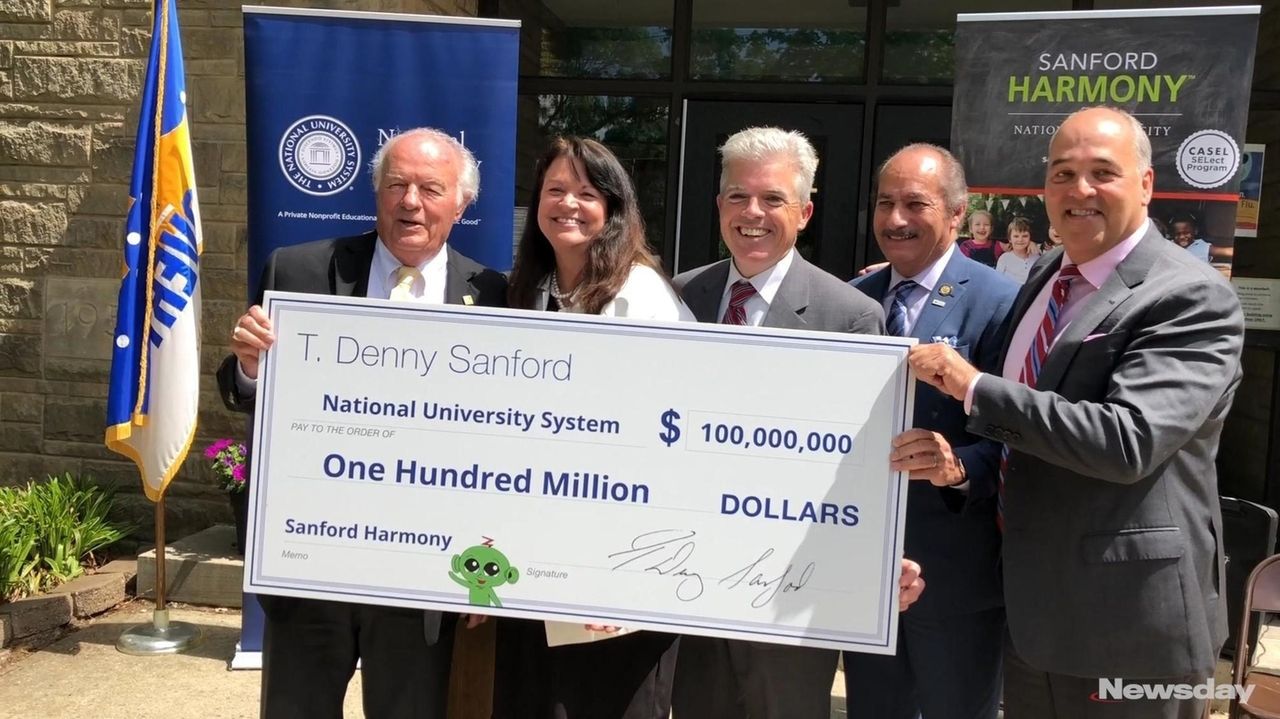 On Wednesday, billionaire philanthropist T. Denny Sanford donated $100 million to expand a program focusing on social and emotional learning at elementary schools. Speaking at the William S. Covert Elementary School in South Hempstead, he and other education officials discussed the benefits of the national program.   Credit: Howard Schanpp

T. Denny Sanford, a billionaire educational philanthropist from South Dakota, came to Long Island on Wednesday to announce plans to donate $100 million to expand a program that works to foster tolerance, empathy and other aspects of social and emotional learning at elementary schools here and across the nation.

The Sanford Harmony program, created in 2014 by the Sanford Education Center at National University in California, is being used in school districts across the nation, including 31 in New York City and 22 on Long Island. It is offered free and includes a tool kit with lessons and stories for prekindergarten through sixth-grade students. The program aims to decrease bullying and increase communication across cultural divides.

“As we see more and more corrosive effects of bullying and school violence on our children in our society, the need for Sanford Harmony is greater than ever,” said Kimberly R. Cline, president of Long Island University, which administers the program in the Northeast.

Sanford, who has holdings in the banking industry, said he regarded the donation as an investment.“I don’t think there’s anything that can make a bigger difference than when you get to children early for social emotional consideration, get them understanding what’s happening, how to be pleasant and respective,” he said.

State and local educators and county officials joined Sanford at William S. Covert Elementary School in Rockville Centre, one of the first schools in the nation to implement the program, for the announcement.

“The expansion of Sanford Harmony has really shown us some positive and wonderful effects with our children,” said William S. Covert principal Darren Raymar. Raymar said he’s seen a difference in the way the students treat and respect one another, as well as how they embrace diversity.

The original program cost about $170 million to build, research and distribute the nationwide, said Michael Cunningham, chancellor of the National University System, a network of nonprofit education institutions that is leading the initiative.

The additional $100 million will be distributed across the nation on a per-capita basis, he said. Given their population size, schools in Nassau County, Suffolk County and New York City can expect a larger portion of funds than other regions, though Cunningham could not quantify how much any single district would receive.

The ultimate goal is to have the program in every pre-K to 6th grade school in the nation, he said, adding that with the new investment announced Wednesday leaders of the program expect to reach at least 20 million students by 2023. Suffolk County Executive Steven Bellone lauded the program’s expansion, saying it can help keep kids away from crime and gangs.

“We need to invest in these kids as they’re kids, to make sure we’re not having to invest in more police, and more corrections and more social services,” Bellone said.

While it’s important to fight issues such as MS-13 gang violence using law enforcement, “the only way to truly solve that problem is to make sure that we wrap a community of support around these vulnerable kids who this criminal organization is attempting to recruit every day,” he said. “And it’s programs like this that are leading the way to make sure that we can be successful in that fight.”