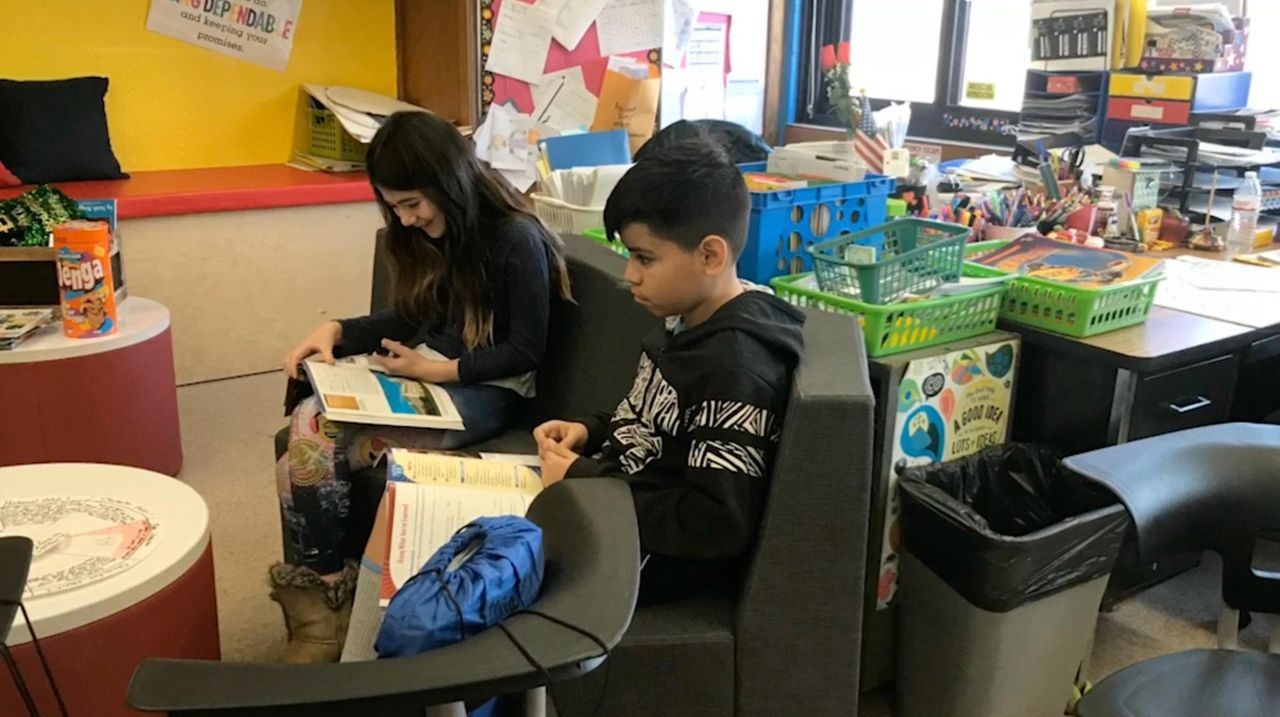 The Levittown school district has transformed five fifth-grade classrooms at Northside Elementary School as part of a pilot program to "departmentalize" classes for more than 100 fifth-graders. The new approach includes chairs on wheels, tables with erasable whiteboard surfaces and couches for reading and studying. Credit: Newsday / Joie Tyrrell

Learning for fifth-graders at Northside Elementary School in Levittown is an object lesson in flexibility, mobility and adaptive spaces.

The chairs are on wheels and offer two ways in which to sit. Students stash their books and belongings in bins beneath the seat. Instead of desks lined up in rows, there are tables, each with an erasable whiteboard surface. The children can choose taller tables or lower ones. The walls are painted bright colors and sectional couches are available as alternative spots for reading and studying.

This trend in classroom redesign is picking up steam across Long Island and the country — changing from the traditional setup to an approach that educators say promotes an enriching, comfortable learning atmosphere. Levittown’s Northside, one of six elementary schools in the 7,000-student district, appears to be a leader on the Island by transforming an entire grade in this way.

Other school systems, including Mineola, Half Hollow Hills and Bayport-Blue Point, have taken similar steps.

Educators say that flexible seating and a more relaxed classroom atmosphere can make learning more inclusive and lessen a sedentary lifestyle among their students.

"I love it and I think it lends itself to a different type of learning," said Theresa Heaney, who teaches English Language Arts and social studies to fifth-graders at Northside. "The children are able to get up, stand up at a tall table if they need to. Sometimes it is hard to sit in a classroom for 50, 60, sometimes 90 minutes at a time."

Some experts caution, however, that in settings where students have more freedom to move about, it is important to have educators who can maintain control of the classroom.

Frank Mortillaro, principal of Northside Elementary, has a positive take on the school's experience so far.

Officials in the Levittown district decided to transform the five classrooms this year in conjunction with a pilot program to "departmentalize" classes for the 100-plus fifth-graders. The children change classes for subjects such as math, English and social studies, and like students in middle school, Northside's fifth-graders have lockers.

Other schools in the district have adopted some furniture changes. At MacArthur High School, for example, many of the math teachers have moved from desks to large round tables.

Across the system, the cost for redesign generally runs from $5,000 to $10,000 per classroom, school officials said.

On a recent school day in one of the classrooms, some students used erasable markers to solve math problems on whiteboard tables. Others worked with small stackable blocks for a lesson on volume.

Mateo Chiaramante, 10, said it is much different from his fourth-grade classroom.

"I really do like the setup," he said. "I like working on the couches. It is really good that you can write on the tables."

His classmate, Kathleen Jeudy, 10, agreed, and said she also appreciates that the chairs have bins below the seats. She has used the couch seating for group projects.

"The seats are more comfortable," she said. "And when you had a desk it would get messy. Here, it is easier; you have a bin."

Most classrooms at Northside, which has kindergarten through fifth grade, remain set up in the traditional way, with rows of desks for students and the teacher stationed at the front of the class.

Mortillaro said he may look into expanding the new concept into other grades.

"A lot of my other teachers are like, 'Hey can we order the furniture?' " Mortillaro said. "You want them to want to try new things. Academics in general, we kind of stay very structured, so to think out of the box is a tough thing for some people."

Maureen Healy, a California-based author, speaker and leader in the field of children's emotional health, has written and studied the topic of flexible seating. She said classroom management makes a difference when students are seated in an unconventional way.

In the Half Hollow Hills district in Dix Hills, Jeremy Doran's English class at Half Hollow Hills High School West is furnished with couches and round tables where students can gather. Doran transformed the space about five years ago after a student in his 11th-grade Regents class commented that the classrooms reminded him of a prison and were boring and uninspiring.

“At the same time, I was reading the book 'How Google Works' and saw how Google's business/environment model could be implemented in our educational facility,” Doran said.

He used a mix of donated goods to create a layout that is open, colorful and stimulating. He said he has noticed an increase in student work productivity, proficiency and engagement.

"The space really allows for differentiated instruction every single day," he said, adding that other students sometimes ask, "How can I be a student in that room?"

Doran has made some other changes. For example, students can take exams on a clipboard or use a three-sided test screen that pops up, blocking others from seeing what's being written.

Audra Cerruto, associate dean and director of the graduate education program at Molloy College in Rockville Centre, said a student's way of learning must be taken into consideration when designing a space.

"Different types may work for different kinds of learners," she said. "Some kids may like to have a formal type of chair but with a cushion. I don’t think the furniture is as important as meeting the student's needs."

In Bayport-Blue Point's James Wilson Young Middle School, educators offered flexible seating about five years ago in some sixth-grade classrooms and now have expanded that to the seventh and eighth grades, mostly in English and social studies classes. Students can use movable chairs and their desks can be combined into tables for group work. The school incorporated ottomans and beanbag chairs into the design.

"The philosophy and goal behind it is to allow the students to be comfortable in their learning environment and foster an environment that allows for better collaboration between students," Principal Robert Haas said.

As an example, Haas spoke of sixth-graders in English class who were tasked with writing a poem and were given the choice of sitting anywhere in the classroom.

"There were students on the floor, students seated in a circle." he said. "What we have found is the students enjoy being in their learning environment and thus it translates into enjoying the learning process more."