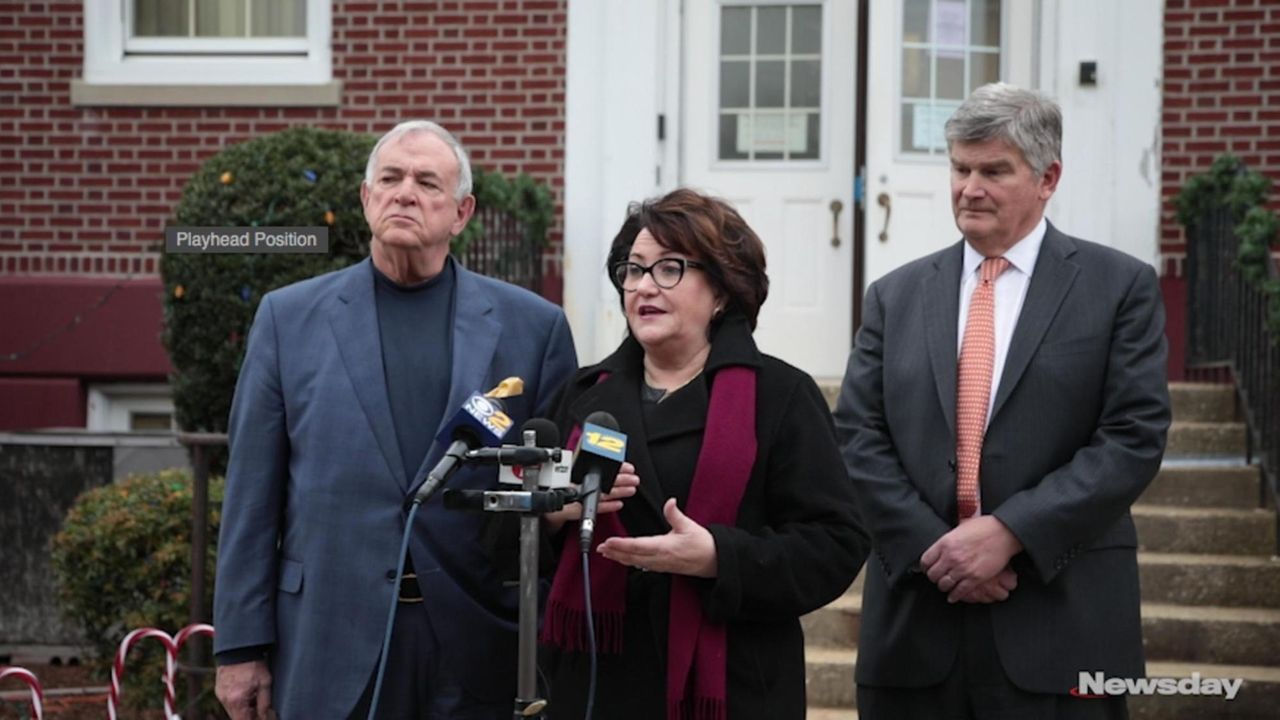 State Education Commissioner MaryEllen Elia emerged Friday from more than seven hours of meetings with Hempstead school leaders with encouraging words for the district that is operating with a state-appointed adviser, as well as a directive to keep “the central focus on students.”     Credit: Newsday / Yeong-Ung Yang

New York's top education official emerged from more than seven hours of meetings with Hempstead school leaders Friday with encouraging words for the district that is operating with a state-appointed adviser, as well as a directive to keep “the central focus on students.”

“We really believe the work that has begun in Hempstead is noteworthy,” Education Commissioner MaryEllen Elia told reporters gathered on the front lawn of the district’s administration building on Peninsula Boulevard. “We’re certainly going to be doing at the state level what we can do for Hempstead.”

The commissioner provided few new specifics on the district's status. She pointed to improvements already reported, including expanded teacher training and preliminary steps to establish advanced International Baccalaureate programs at the elementary and middle school levels.

Elia singled out for praise Jack Bierwirth, the veteran Long Island school administrator whom she appointed as a special adviser, known as a “distinguished educator,”  for Hempstead in fall 2017.

The commissioner also cited the work of principals in charge of Hempstead High School and Alverta B. Gray Schultz Middle School, both of which the state Education Department in 2015 designated as having chronically low academic performance. The department recently announced that the two schools have made “demonstrable” academic progress.

“We still have a ways to go in Hempstead, but we’ve got to continue to make progress and speed up,” Elia said. “It takes time.”

Roger Tilles of Great Neck, Long Island’s representative on the policymaking state Board of Regents, appeared at the briefing alongside Elia. He observed that she has devoted an unprecedented amount of time, as a commissioner, addressing Hempstead’s scholastic, administrative and financial weaknesses.

Asked about the system's finances, Elia noted that the Regents earlier this week recommended a $2.1 billion increase in statewide school aid for the 2019-20 school year — $500 million more than was recommended at this time last year. The final say on that issue is up to state  lawmakers and the governor.

Most of the extra aid would be in the form of "Foundation Aid," which focuses especially on needy districts such as Hempstead.

“Certainly, Hempstead will be in a position to get some of that,” Elia said.

Friday marked the commissioner’s first return to the district since January. Her meetings during the day with school board members, administrators, union leaders and others began at 7:40 a.m. and were followed by her brief statement and question-and answer session with reporters in the afternoon.

The visit came one week after release of Bierwirth’s annual review of the nearly 8,000-student system. His position as distinguished educator came with a mandate from Elia to assess all district operations and report to her with recommendations for turning around the district.

Bierwirth wrote in the Dec. 7 report that Hempstead has made “substantial progress” and pointed out major challenges that remain. Those include inconsistent governance, academic performance that continues to be among the lowest in the state, expired labor contracts and accounting irregularities. It was his fourth report to Elia since he began work in the system in October 2017.

LaMont Johnson, president of the school board, said in a statement Thursday said Elia's visit was a clear sign that she and the panel have the same goal of "students first."

"I am thankful for the commissioner's time, dedication and attention to [the district] as we work to ensure that every child in our district receives a high-quality education," Johnson said.

The district has improved students' state test scores and graduation rates, put in place more accurate financial and budget practices, and is addressing long-standing issues with facilities, according to Bierwirth's annual report.

Not all residents are convinced that progress made so far has eased pressures on students, however. A former board member, Maribel Touré, said during a phone interview Friday that she has heard local schools continue to face security problems.

"Students themselves are saying that they're afraid to go to school, that they don't feel safe," said Touré, who lost her bid for re-election to the board in May.

In her January visit, Elia and Regents Chancellor Betty Rosa spoke individually with board members about the urgency of implementing changes and working together.

The composition of the board, long marked by infighting and 3-2 votes on a range of issues, changed in July as a result of the May election. The current trustees — Johnson, Vice President Carmen Ayala and trustees David Gates, Patricia Spleen and Randy Stith — have largely been more unified.

Elia’s appointment of the special adviser is the state’s most hands-on exercise of power over a Long Island district since its 2002 takeover of the Roosevelt system, the first and only time that has occurred in New York. The state’s action in that Nassau district resulted in boosts in students’ academic performance and improvements in infrastructure, but it was an expensive 11-year commitment and officials have vowed not to go that route again.

State schools chief to visit Hempstead district Education Commissioner MaryEllen Elia will meet with board members and administrators in the nearly 8,000-student system, which is acting on recommendations of an adviser she named in 2017. Review: LI district makes headway, faces hurdlesThe Hempstead school district has many hurdles to clear, though some operations are closer to ... Hempstead schools focus on grades, curriculumThe district moves into its second year with special adviser Jack Bierwirth, named by state Education Commissioner MaryEllen Elia to help turn around the largest K-12 system in Nassau County. Officials stress need for change in struggling districtAfter an extraordinary personal visit Thursday from New York's top two education leaders, Hempstead school board trustees generally agreed on the urgency of implementing a state-appointed adviser's sweeping recommendations to turn around the system.