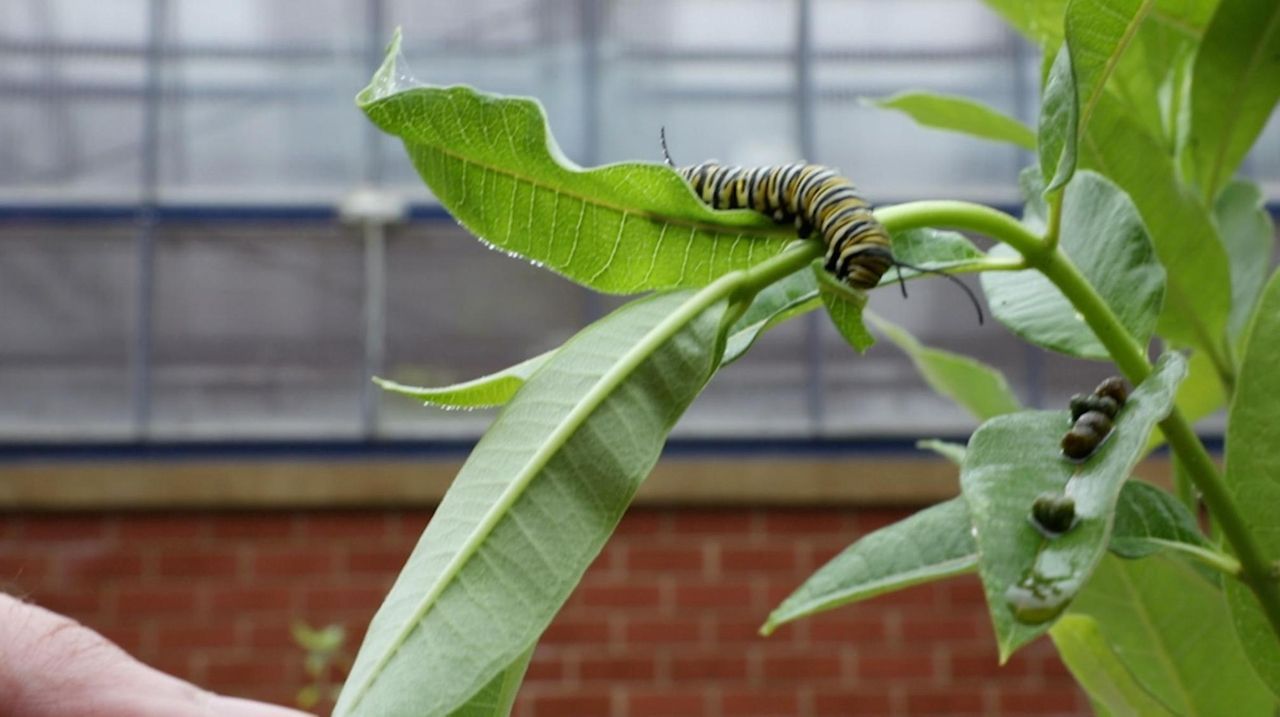 The Environment Team at Northport High School, along with staff, got hands-on experience on how to build and cultivate a greenhouse on school grounds. Credit: Newsday / Shelby Knowles/Morgan Campbell

Plastic straws and Styrofoam trays are no longer in some school cafeterias, a cornstarch-based spork has become the cutlery of choice in a few lunchrooms, and districts have installed solar panels on buildings and converted bus fleets to greener options.

Long Island public schools, with 124 districts and hundreds of facilities, have been enacting environmentally friendly initiatives, including measures pushed by local students. Educators and environmentalists expect the momentum to continue in 2019-20, particularly after students played roles in this year’s Styrofoam ban in Nassau County and the ban on plastic bags in Suffolk last year.

"I always want to find solutions to make the world a better place," said Sam Adler, 12, an eighth-grader at Long Beach Middle School who helped lobby for the Styrofoam ban. "The more children who get involved, the more our oceans will be cleaner — and we will keep this beautiful world we live in."

Nassau County Executive Laura Curran signed a Styrofoam ban into law in June, joining a national movement going away from plastic packaging materials and toward more biodegradable products. It goes into effect Jan. 1.

Long Island schools have made changes as well, from upgrading septic systems to using only organic materials to care for playing fields. One district — Amagansett — recently banned balloons on school property and the release of balloons in an effort to curb pollution. When balloons return to Earth as litter, they can be mistaken for food and eaten by animals.

"We have seen more people being active in the environment, and the students are really taking an active role," said Northport High science teacher James Kubik, who teaches the school's Environment Team classes. "They are concerned about their future and what's going to happen to this planet."

Yet, while environmental advocates acknowledge and applaud student involvement, they want to see more from the districts.

"As someone who has been doing this for over 30 years, we are seeing more interest and activity from high school students than I ever have. They take on issues where they can make a local difference," said Adrienne Esposito, executive director of the Citizens Campaign for the Environment, a watchdog group based in Farmingdale. "Though the schools have made some progress, they are slow to change. Unfortunately, they cite financial challenges, but many of the changes would save money ... .

"They should do so much more — get out of their comfort zone and be a role model to their students."

Skip the straws and Styrofoam

Newsday, after asking all school districts this summer about their environmental initiatives, found several systems — including Bay Shore, Long Beach, West Islip and Wyandanch — had taken steps, such as phasing out the use of plastic straws and other single-use plastics. Environmental advocates said these plastics can last thousands of years.

Pegeen Friese, 18, who graduated from Northport High in June, was part of the school's "Skip the Straws" campaign to raise awareness of single-use plastic straws, including asking students to sign a pledge not to use them. She also participated in a bag count at local shops in the community as part of an effort to collect data on the types of bags shoppers were using after Suffolk officials had banned them.

"If we can do things like 'Skip the Straws,' then that can become more public and people can open their eyes a bit," she said.

In May, Long Beach Middle School students who were enrolled in a program called "Stewards of the Sea" spoke to the Nassau Legislature regarding the negative impacts of Styrofoam. Sienna Silvia, 13, now an eighth-grader, was among them. The district already was using biodegradable trays.

"When you are environmentally aware, you know what is going on, and it is important ... I think people around my age are starting to care more about this ...," Sienna said.

In West Islip, the district will offer paper straws instead of plastic ones in the cafeteria this school year. In addition, students will use a cornstarch-based spork in an effort to reduce the use of plastic utensils, and replace foam trays with biodegradable ones.

The Herricks district also has switched to cornstarch sporks, which are only 10 percent plastic, and is making the switch to paper straws.

Greener fleets and solar panels
Districts also have looked to their vehicle fleet to improve environmental efficiency. Some districts have changed bus routes and cut back on buses idling. The Riverhead district was the first on Long Island to use propane-powered buses, starting in 2010, and now has 37 such buses. The district plans to purchase 13 more vehicles within the next five years, making the majority of its bus fleet propane-powered.

Riverhead officials said propane buses, which cost about $113,800 per bus and are $10,000 to $15,000 more than diesel buses, require less maintenance and less engine oil. "The costs to operate the vehicles is less," Board of Education president Greg Meyer said.

Long Beach has one of the greenest fleets on Long Island, with 48 buses running on compressed natural gas.

"They are much better and healthier for our students," said Michael DeVito, Long Beach assistant superintendent, Finances and Operations.

Several districts are investing in solar power. Through a districtwide energy efficiency program that includes the installation of solar panels, the Commack school system expects to save about $750,000 annually. Three buildings will have co-generation units — combined heat and power — to conserve energy as well.

The Three Village School District in Suffolk is in the process of installing solar panels at each facility, joining the high school, where panels were installed several years ago. Kings Park also is in the midst of a solar panel project.

Esposito noted that solar, while an upfront investment, offers significant long-term savings. "And there are so many programs that allow schools to get grants and long-term financing. In many instances, it doesn't make sense not to do it," she said.

The Long Beach district installed solar panels this summer as part of a $14.4 million energy efficiency project. There is no taxpayer impact, DeVito said, as the bill will be paid through reduced energy use.

Timothy Eagen, superintendent of the Kings Park school district, said the district recycles cardboard and some paper, and has a student-run program to reduce plastic water bottle use. He would like to do more.

"Unfortunately, recycling beyond this becomes costly for school districts," he said. "It is much more complicated than residential recycling ... If towns and/or the county would offer a free recycling service for schools, we would be 100 percent onboard."

Students at Northport High will use a newly built greenhouse as an outdoor classroom, with a focus on environment and conservation. The cost was included in the district's $40 million bond referendum approved by voters in 2017.

Before going to college, Samantha Fanuka, a sophomore at American University in Washington, D.C., was instrumental in opening the greenhouse. Several schools have built similar structures, including the Westhampton district, which opened a greenhouse in January.

Northport's greenhouse has 600 square feet of indoor growing space and offers hands-on opportunities for students to learn about ecosystems.

"With a greenhouse, you can see what you are learning, and to me that is so important," Fanuka said.

In Wyandanch, the district said turf maintenance on school property is totally organic. Also, the district built and installed a barn owl box in the spring and has constructed two in-house tower gardens for in-class plant cultivation.