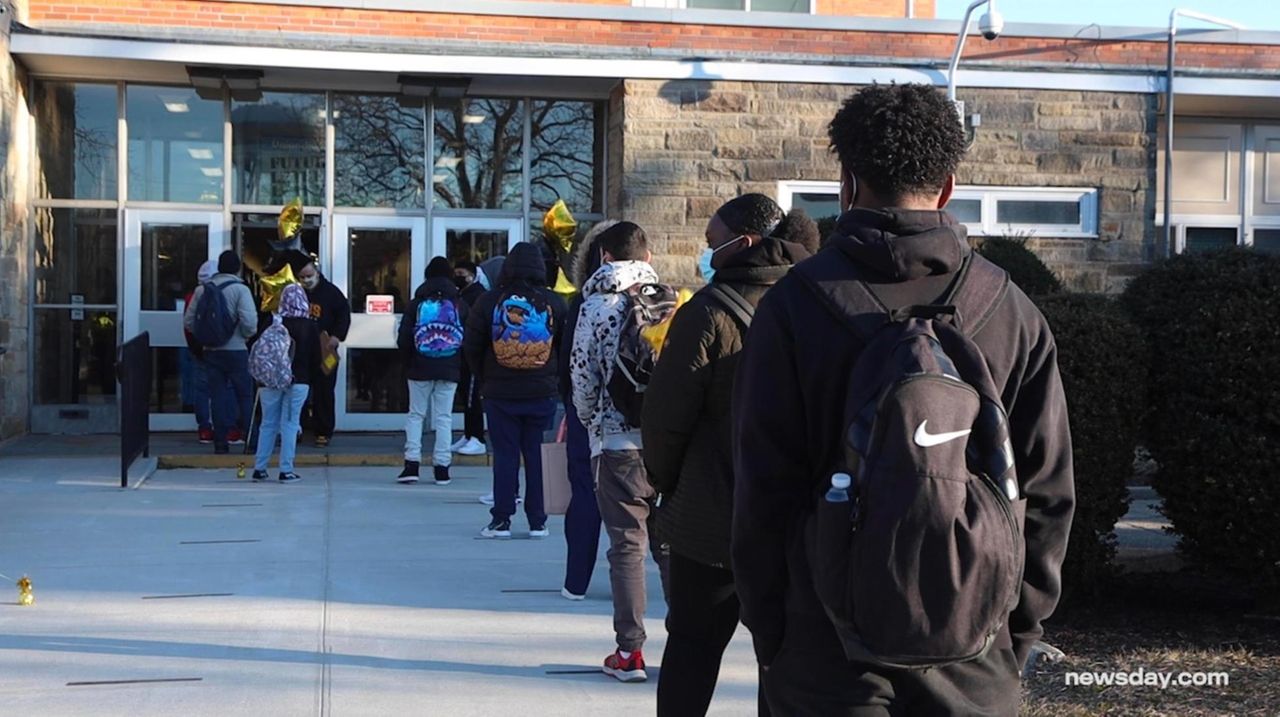 One year ago, as COVID-19 quickly closed in, students and educators across Long Island were evicted from their schools.

Coronavirus cases were surging, hospital beds were becoming scarce — and the news that schools would need to shut down left children with an unexpected break. But educators were rattled.

"You could almost feel something impending in the week before the shutdown," said Baldwin Superintendent Shari Camhi, recalling those days. "There was no talk at all about the possibility of schools actually being closed, but you could feel it in the pit of your stomach."

At first, it seemed temporary.

On March 16, 2020, Gov. Andrew M. Cuomo directed school systems statewide to close for two weeks, much to the delight of some students. Six weeks later — after extending the shutdown three times — Cuomo announced schools would remain closed for the remainder of the academic year, at which point many students wanted to be back in their classrooms.

The decision disrupted the education of Long Island’s 430,000 K-12 students. What happened in the months since, amid an unprecedented shift to remote learning, has put a spotlight on educational inequities and an urgency to address children’s mental health. Educators say the pandemic also has revealed the importance of integrating technology with education, and forced districts to adapt to new teaching methods.

Seniors lost out on prom and did drive-thru graduations. Parents of special-needs students noticed their children began to regress in academic and physical skills. English-language learners were forced to navigate devices and educational platforms they had never used before.

'We were forced to completely reinvent the system that’s been in existence for 150 years, basically overnight.'

"We were forced to completely reinvent the system that’s been in existence for 150 years, basically overnight," Camhi said.

A year later, educators said, there is hope and cautious optimism about a full-time in-person return to schools. Vaccinations on the upswing seem to signal some level of normalcy ahead. And there are indicators that educational shortcomings highlighted by the pandemic could lead to long-term, positive changes.

"Each day, each week and each month, it’s important to continue being hopeful that things are going to open up and progress will be made," said Rocky Point High School Principal Jonathan Hart. "I think that hope is what’s carried us through this past year."

Educators said the sudden switch to remote learning last spring underscored two key points: Integrating technology with education in ways that promote creativity and engagement is vastly important; and students who don’t have access and training on that technology are being severely left behind.

The lives and routines of students were upended as they were forced into quarantine, unable to go to class or see their friends.

Making matters worse for some, the delivery of instruction during remote learning varied widely, with disparities evident in higher-needs districts, according to a Newsday analysis. Some schools relied heavily on take-home printed packets, while others provided live on-camera time with teachers.

It quickly became clear to educators that students in lower-income districts or without access to technology, and those with language or learning barriers, were falling further behind. For some of them, days of instruction were lost, educators said, and they will need extra attention to get back on track.

"They started in the race behind and now we’re adding even more hurdles that English-proficient students and students already trained on these devices don’t have to face," said Jessica Gomez, a longtime bilingual teacher in the South Huntington school district and board member on the Long Island Latino Teachers Association.

Recognizing the inequities, districts sought solutions. Some Long Island school systems without mobile devices for every student, or whose students did not have access to reliable internet, partnered with donors and used grants to invest in new technology.

Uniondale in Nassau County had thousands of students without devices last spring. By the fall, the district provided more than 3,600 iPads and more than 100 Wi-Fi mobile hot spot devices to students who needed them, said Uniondale Superintendent Rhonda Taylor. The district began the academic year 90% remote-only.

'There have been disparities across Long Island for many years. The coronavirus only magnified that in terms of access to technology, to Wi-Fi.'

"It’s been challenging not having our scholars in the building with us," Taylor said March 8, the first day the district had its ninth-graders, who have been fully remote, return to school on a hybrid model. "We’re also aware that there have been disparities across Long Island for many years. The coronavirus only magnified that in terms of access to technology, to Wi-Fi."

Gomez said that providing students with a device and internet connection only addresses part of the problem for students on a remote or hybrid model. The technology alone doesn’t ensure quality learning, she said.

"My days were nonstop, from morning until about 9 at night," Gomez said of last spring. "It was a combination of the student not having access, but also that their families were overwhelmed. It resulted in a lot of kids being disengaged."

For children with special needs, schools are more than just lessons on history and math. They also offer counseling services as well as speech, occupational and physical therapy, which they couldn’t experience the full benefits of when on a remote schedule.

Kristen Parinello, a special-education teacher at Martin Luther King Jr. Elementary School in the Wyandanch district, said that last spring, teachers would try to work with students virtually in small groups. It was difficult at times, she said, walking a student through an application.

"They have an IEP, and we need to fulfill their IEP as best we can," Parinello said of the individualized education programs that are used to track a special-needs student’s progress. "We need our students to be in the building."

Across districts, no matter the instructional model used, some families opted to keep their kids on a remote model for fear of the virus coming home with them from school. This left about 76,440 students starting the school year remotely, according to a Newsday analysis.

Students Islandwide felt isolated, distracted, and at times disengaged, some of them said — feelings that have lingered over the past year.

Kiara Quamina, 17, of Baldwin, said "it was very challenging" to keep on top of her mental health when schools were fully remote last spring.

"It’s still kind of hard because it’s the end of my senior year and it’s still very upsetting that I didn’t get a true senior year experience," Quamina said. "But overall my mental health has gotten better just because I get to have a routine and I have to wake up at a certain time every day and go to the same classes every day."

'I’m very much an extraverted person and thrive on human connection so being back in the class five days a week has been really helpful for me.'

Ryan Padala, a senior and president of the student council at Garden City High School, said he tries to get his class excited about senior year. He also said he is glad to be back in person, which he prefers over remote or hybrid learning.

"I’m very much an extroverted person and thrive on human connection, so being back in the class five days a week has been really helpful for me," said Padala, 17. "But one of the worst things about this year is just that the morale has been super low throughout the whole school and particularly the senior class."

In Uniondale, Mia Bynum was one of the 120 ninth-graders who opted to go back to school when it reopened last week on a hybrid model.

"It was really challenging because I had to stay in my room most of the time," Bynum said of remote learning. "When I’m at home sometimes I’m distracted."

Teachers explained how districts have dedicated time to social and emotional learning this year for students, and mental health breaks for themselves.

In Wyandanch, for example, Parinello said the district started this school year with "Wellness Wednesdays," which fall on the days students are home for remote instruction. Teachers can step out for a "wellness hour" and go for a walk from 12:30 to 1:30 p.m., she said.

"We’re not focused on academics that day, we’re only focused on the well-being of our students," Parinello said. "It’s a social, emotional check-in."

Quamina, who is on a hybrid schedule, said she noticed a "complete 180-degree" change in remote instruction in the fall.

'It’s so much more involved and teachers seem better equipped at running an entire class online than they were in the spring.'

"It’s so much more involved and teachers seem better equipped at running an entire class online than they were in the spring," she said.

Camhi, the Baldwin superintendent, said educators will probably be looking at their curriculum differently even when school returns to fully in-person learning.

"Because what people realized and what we promoted for so many years before is that technology in education is best used for creativity, communication and collaboration," she said. "That is a huge leap for education."