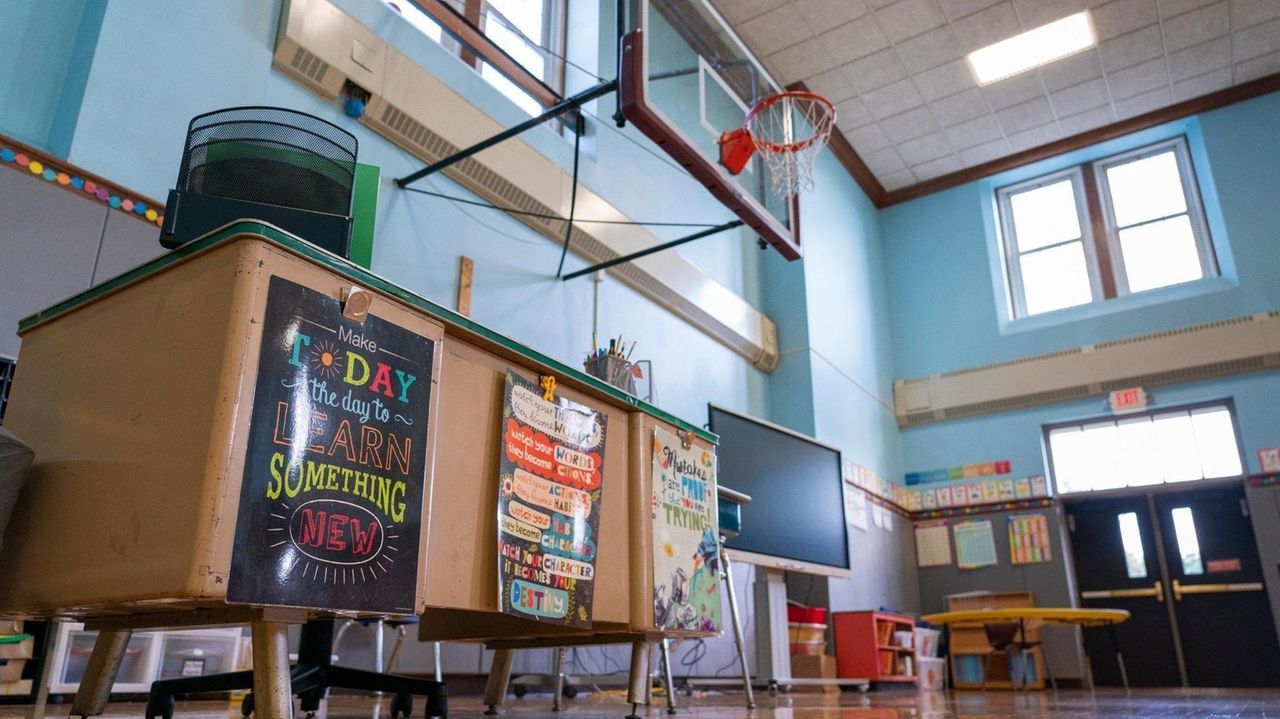 Garden City School District Superintendent Kusum Sinha spoke on Monday about how proud she is of the overhauls the schools in her district have made in order to reopen safely while adhering to COVID-19 protocols. Credit: Corey Sipkin

More than 200,000 students are due to start classes in Long Island public schools Tuesday, the biggest opening day on the calendar and one marked by extraordinary efforts to prevent the spread of coronavirus.

Tuesday will pose the most challenging test yet for school administrators and teachers since schools shut down in mid-March. A total of 61 districts are scheduled to reopen Tuesday.

Another 44 are to open Wednesday through Friday, with the final seven starting Sept. 14. A dozen opened last week.

On Monday, only hours before students were expected to return to school, the Southold School District announced that in-person classes would be pushed back until Sept. 18 after two employees tested positive for COVID, according to a letter to parents by Superintendent Anthony Mauro.

Classes on Tuesday will be canceled and the district will hold abbreviated distance learning days on Sept. 9, 10 and 11, where students will engage with teachers and staff on an abbreviated basis, Mauro wrote. A more comprehensive distance learning program would begin Sept. 14 while students return in person four days later, the letter said.

"Our objective with this approach is to comfortably acclimate our students and teachers to instruction, both in-person and through distance learning," Mauro said.

Carle Place announced Monday it would delay in-person instruction after an investigation revealed some students had "close or proximate contact" with other students testing positive, the superintendent said in a letter.

In the Riverhead School District, which began classes last week, two siblings attending Aquebogue Elementary School tested positive, according to the district. Teachers and students in their classes will be quarantined for 14 days and learning will continue remotely, interim Superintendent Christine Tona said in a letter posted to the district’s website.

Many school leaders have cautioned residents that they cannot entirely rule out the possibility of another shutdown, should cases of infection spike again. Some have added that the outcome depends largely on whether students and their families exercise caution out of school as well as inside.

"This is going to be a team effort, so we're all going to have to work together to make sure everyone is safe," said Thomas Rogers, superintendent of Syosset schools and a former chief of the regional Nassau BOCES system.

Syosset opens Tuesday, with about 5,300 students signed up for in-school instruction, and another 1,300 opting for remote learning.

Schools throughout the Island have prepared at a rushed pace, following advisories from state authorities who waited until infection rates dropped to levels deemed safe before giving the go-ahead. Gov. Andrew M. Cuomo announced Aug. 7 that districts could reopen, provided their plans were approved by the state and that parents and teachers had a chance to express any concerns during virtual public forums.

Many districts report that they are still awaiting delivery of ordered supplies ranging from plexiglass sneeze shields to electronic tablets.

As a sanitation measure, schools have stripped classrooms bare of nonessential furniture including easy chairs, sitting rugs, bookshelves and even file cabinets. Many classrooms now consist of a dozen or so desk chairs, along with webcams used to transmit lessons to students learning at home.

The new look can be a bit austere. Some school administrators said they are taking steps to deal with the aesthetics of classroom appearance, as well as the need for safety.

An example is the approach taken in Garden City, where cafeterias and gyms have been partitioned into classrooms, with extra space provided so younger children can remain with classmates rather than splitting up. Kusum Sinha, the district's superintendent, said teachers have done all they can to decorate partition walls with colorful posters, charts and slogans.

"It's not that students will think 'I'm in a gymnasium. I'm in a cafeteria.' It looks like a classroom," said Sinha, whose district reopens Tuesday. "Our teachers did a fantastic job of decorating, and all in few days."

One worry for school staffers, as schools began reopening last week, was that students would bridle at the unprecedented number of new safety precautions put in place. These included mandatory temperature checks, wearing of masks in classrooms and hallways, and as many as six or seven hand-washings daily.

As it turned out, the great majority of students seemed to take such procedures in stride, teachers said later. Many youngsters had other priorities on their minds.

"Kids were just happy to be with their friends," said Alexandra White, a fifth-grade teacher at Cantiague Elementary School in Jericho, which opened Thursday. "School is your second family."

With Vera Chinese and Robert Brodsky

Correction: A prior version of this story gave the wrong days for the opening of Garden City and Syosset schools. They reopen Tuesday.

Officials: Districts report positive COVID-19 testsThe Sewanhaka, Riverhead and Southold school districts have reported new positive coronavirus tests among students and staff, officials say. See your school district's reopening plan, start dateSchool districts across Long Island — which will open on one of nine days in September — have submitted their plans to New York State on how they expect to reopen their doors to students. Sign up for The Classroom, our education newsletterCoronavirus is changing education on Long Island. You have questions. We have answers. Sign up for The Classroom newsletter. See what percentage of people around you are fully vaccinatedSee vaccination rates by ZIP code, and more COVID-19 data.