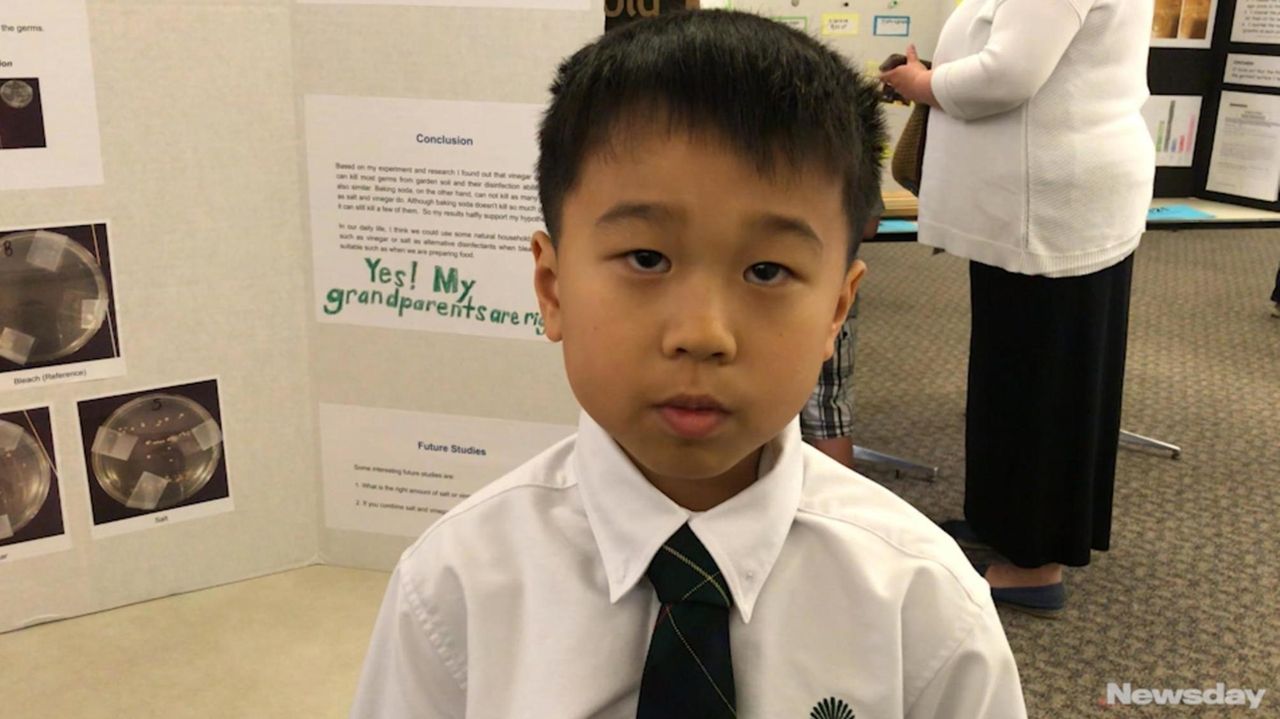 Long Island kids gave their thoughts on everything science at a science fair at Brookhaven National Laboratory in Upton on Saturday, May 5, 2018. The answers are worth a listen.  Credit: Newsday / Laura Blasey

Perhaps think twice before you buy a bottle of Coca-Cola or Gatorade.

That’s the conclusion Alexa Mazure, 9, a fourth-grader at Jefferson Elementary School in Huntington, came to while working on her project for Brookhaven National Laboratory’s annual Elementary School Science Fair.

“My mom is a dentist and she taught me a lot about brushing your teeth,” she said, adding that she soaked extracted teeth in cups of liquid for a month. “I thought water was the best and I was right. I realized Coca-Cola was the worst for your teeth.”

The ones in water came out fine. The ones in coke and Gatorade, however, were stained and noticeably fragile.

Hundreds of students presented science projects at Brookhaven National Laboratory in Upton on Saturday. The children, who were in grades kindergarten to six, represented 110 Suffolk County schools and had 471 experiments.

For 34 years, the fair has brought together students from across Long Island to answer life’s harder questions, like whether it’s OK to eat food off the floor (no), how to soften dried Play-Doh (wrapping it in a wet paper towel) and which toilet paper brand biodegrades the fastest (Scott). The young scientists in training and their projects make it to the open house at the lab by winning fairs at participating schools.

A judging committee of 60 scientists and teachers examined each project, looking for creativity, a high-quality hypothesis and experiment, and logical conclusion. The best projects and runners up for each grade level were honored with medals and each participant went home with a ribbon.

Alexa didn’t go home with a medal but said she still enjoyed doing the project.

“To be honest I don’t really love science but this project was really fun,” she said. “I want to be probably a nurse and a singer, but nurse has a lot of science in it.”

Hantao Lu, 9, a third-grader from St. James’ Harbor Country Day School, was inspired by his grandparents to do his project. They have always used saltwater and vinegar to clean and kill germs and he wasn’t sure if they were right about which household products worked best.

“I thought it would be vinegar because it’s so sour so I thought germs wouldn’t like it,” he said.

He made a simple soup from chicken bouillon and mixed in some dirt. He poured the soup into five cups, adding materials like baking soda, white vinegar and bleach to each. He measured bacteria growth by swabbing some of each mixture onto agar plates — petri dishes with a gel that feeds microorganisms — and incubated them.

Bleach did the best job at keeping the bacteria from growing, Lu said. But it’s not always practical to use bleach and the next best options: vinegar and salt.

“My grandparents were actually right,” he said.

He’s already thinking about his next project: developing a medicine to make people live longer.

Officials say that’s the kind of enthusiasm they want to foster with the science fair.

“This competition introduces students to the joy of discovery and the scientific method,” said Scott Bronson, manager of pre-college programs from the office of educational programs at Brookhaven National Laboratory. “It’s our mission to create the next generation of scientists, mathematicians and engineers.”

Teddy Hopkins, 7, said he wanted to be a marine biologist when he grew up. He wasn’t able to work with animals for this project but he still got to do science.

He tested whether sight affected taste when it came to food by feeding bits of colored cake to subjects with and without blindfolds.

“More people got it right when they were blindfolded,” said Hopkins, a second-grader at Dickinson Avenue Elementary School in East Northport. “I just like experimenting.”