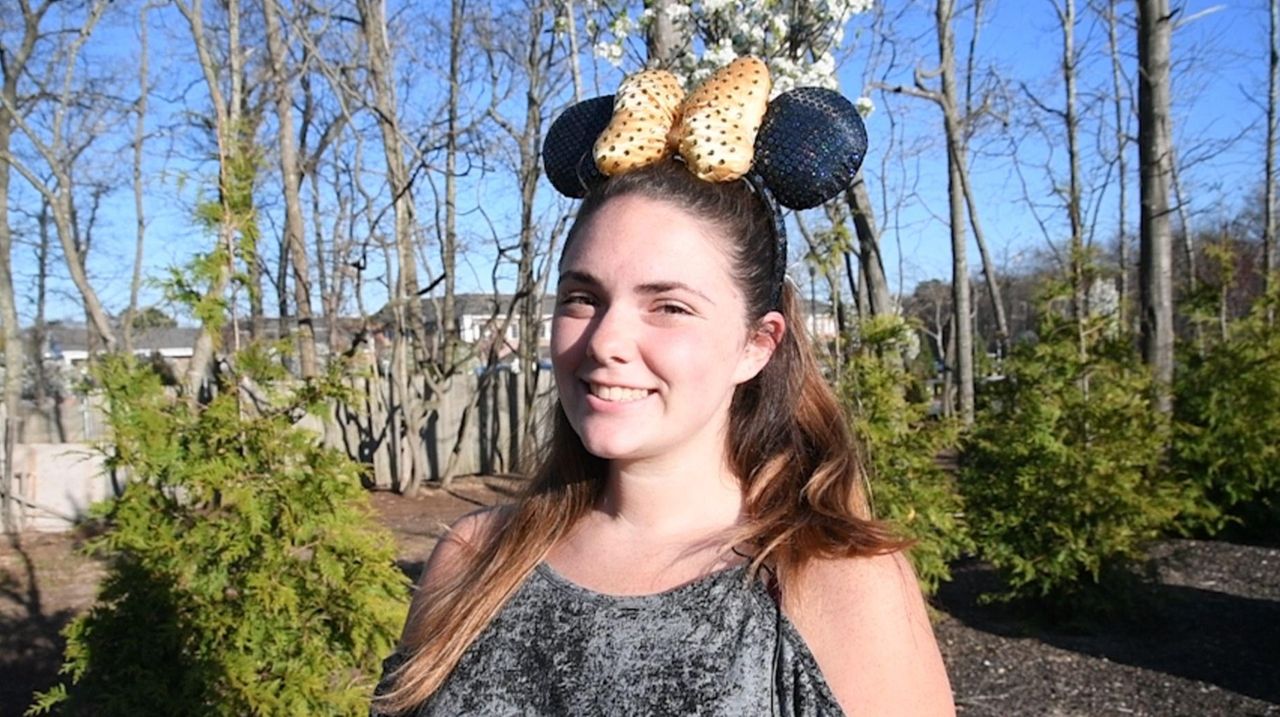 The Shoreham-Wading River Central School District is facing backlash after taxpayers learned at a recent meeting that the district contributed nearly $153,000 toward the high school senior class trip in March to Disney World, picking up most of the tab including airfare and hotel rooms. Emily Ginley, 18, one of the 181 students who went on the trip, talked about the controversy on Tuesday, April 18, 2017. Credit: Newsday / Thomas A. Ferrara

This year, attendance was much higher. Eighty percent of the 227 members of the Class of 2017 made the four-day trip to the Orlando, Florida, theme park in March.

The difference: For the first time, the district picked up almost the total tab, including airfare and hotel rooms — at a cost of nearly $153,000, compared with less than $10,000 the previous year.

Now, just a month before residents vote on the district’s proposed budget, that decision is at the center of a backlash that drew anger from some taxpayers about the cost of the excursion and left officials scrambling to explain the educational purpose it served.

“It’s a huge stretch to think that the Florida trip, where some of the kids went to Epcot [international theme park], is educational,” said Robert Badalian, a 40-year Shoreham resident, who was at the school board’s April 5 meeting. “I don’t deny that the kids have the opportunity to go, but to think that that is an educational trip — that taxpayers are funding almost its entirety this past year — is just outrageous.”

District officials promised that next year’s trip will be different.

“Look, it’s a stretch. It’s a stretch,” interim Superintendent Neil Lederer said in an interview after that meeting. “But I’ve worked with the board of education over the last three to four months to modify that position. It’s not going to be the case going forward. That’s the important thing — that people realize that the budget that they will vote on will not cover trips to that extent. They will only cover the educational aspects of the trip.”

The school board this month allocated $40,000 for next year’s class trip in the district’s proposed 2017-18 budget.

The senior trip to Disney World is a district tradition since at least the 1990s, according to a district spokeswoman.

“For me, it’s something you learn about in ninth grade: Your senior trip is Disney,” said senior Emily Ginley, 18. “Every year you get more and more excited for it.”

The controversy has its roots in discussions that began last summer, days after Lederer became interim schools chief. The district’s attorney, who had taken a closer reading of state law, said he believed the Disney journey technically was an educational field trip — and as such, the district had to pick up most of the tab, Lederer said.

There was a “change made in philosophy, and it ended up escalating the size of the trip,” board president John Zukowski said at the meeting.

This year, with the district footing most of the cost and the students paying $200 each, 181 of the 227 seniors took the trip from March 1-4.

The board approved the annual trip on Lederer’s recommendation at a meeting last fall. At that time, trustees increased the trip’s funding by approving a shift of up to $56,000 from an employee benefits account, said Glen Arcuri, assistant superintendent for finance and operations.

George Roberts, 42, said that when he and his family moved to the district, he did not expect that taxpayer dollars would be used “to send the senior class to what seems to be a recreational trip to Disney World. For a cultural experience, there are much better, closer alternatives, such as the city, Chinatown, many of the museums that it has to offer.”

Stacey Tingo, a parent of a senior and two other children in district schools, said at the meeting she was “all for the trip. And I do believe it to be educational. Just not on the taxpayer dollar.”

Lederer had asked students, upon their return, to be prepared to explain the educational parts of the trip.

At the April 5 board meeting, a group of them presented a five-minute PowerPoint slideshow, connecting the park’s attractions to themes in the school’s curriculum. Slides highlighted Epcot, with its international pavilions; the Animal Kingdom, home to safari trails and diverse wildlife; and the Magic Kingdom’s Hall of Presidents, which was closed for renovations to add an exhibit for President Donald Trump.

Robert Joannou, 18, a senior who spoke at the meeting, said in an interview that he understood residents’ concerns, but that the trip was important because he learned about culture and responsibility.

“It’s just our first time being on our own — really without our parents — budgeting time, money, transportation, being responsible,” Joannou said. “It made me want to learn more about the world and the diverse cultures that each countries [represented in the parks] had within.”

Lederer said at the meeting the increase in district spending was “based on an understanding of the law and state [Education Department] requirements . . . which I think we were too literal in the interpretation. And you can blame me for that.”

State education law makes references to the regulation of field trips. A state Education Department spokeswoman referred Newsday to “School Law,” a publication from the New York State School Boards Association and the state Bar Association, which says that “school districts may use district funds to pay for part or all of the costs of a field trip only if the trip is part of its educational program.”

A state education commissioner’s ruling, issued in 2000, states that “it is improper to use public funds to subsidize a trip that is essentially a private recreational experience and not a part of a school district’s educational program.”

Next year’s senior trip requires board approval. The $40,000 approved by the board is included in the district’s proposed 2017-18 budget, which is up for a vote on May 16. Lederer said that money would be enough to cover about 100 students.

“I guess people are getting wind of the fact that, ‘Wow, you guys paid for a trip to Disney, so students could go on roller coasters, and at the same time, you have the 11th-grade cohort . . . representing to the board their concern for a proposal for a Disney trip that would have direct tie-ins to curriculum,” school board trustee Jack Costas said in an interview.

A statement posted on Shoreham-Wading River’s website on April 7, after Newsday inquired about the trip and its costs, noted the district “has allotted significantly less funding” for school-sponsored trips next year.

“Each year, the district reviews its policies and practices in an effort to best serve our student body, while also being financially prudent with taxpayer dollars,” the statement said. It said that funding will not cover food, lodging and transportation and would “only support the educational components of the trip.”

Lederer took responsibility for the decision to pay for the March senior trip.

“If you’re going to look at anybody for making poor judgment, in going forward with the present, the trip that occurred this year, in this academic year, then it would be me,” he told residents at the meeting. “As superintendent, I’m responsible for all decisions.”