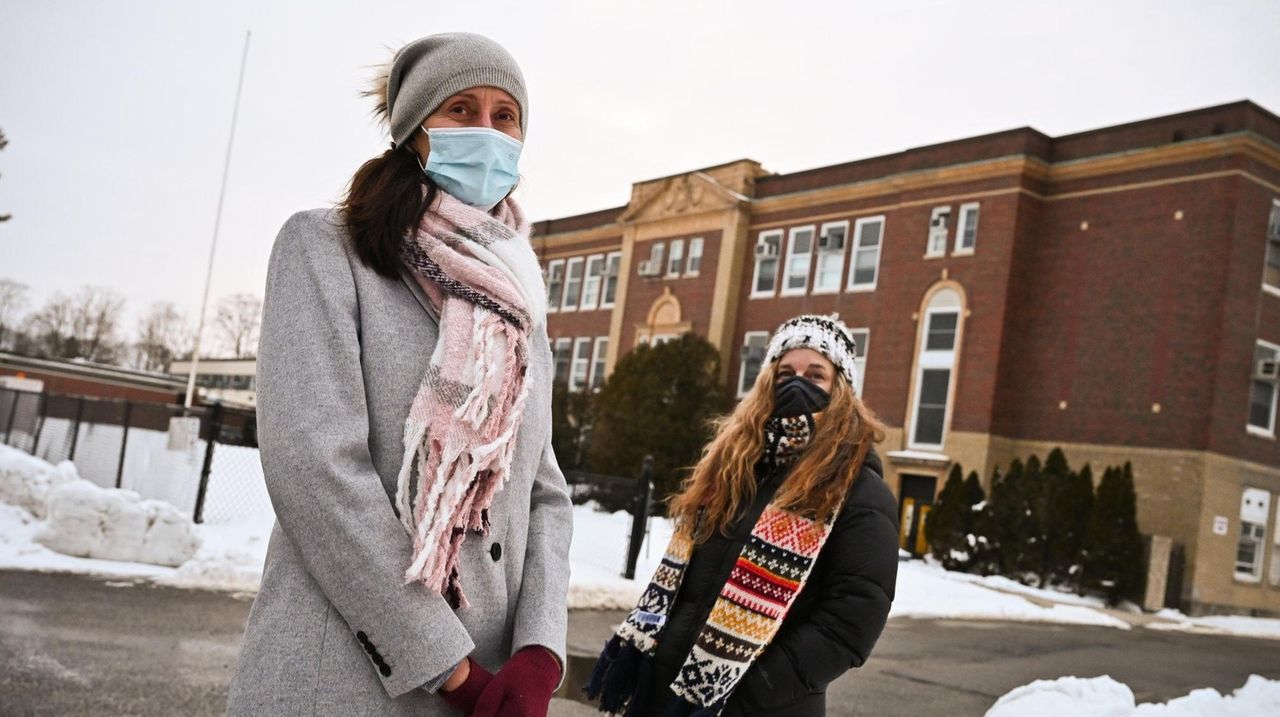 Two parents of Smithtown schoolchildren, Karen Wontrobski-Ricciardi and Laurie Pisciotta, who both live in St. James, on Wednesday said they plan to attend a car caravan to school buildings Sunday to demand a full return to in-person learning for the district's secondary school students.  Credit: Newsday / Steve Pfost

A group of Smithtown parents plans a car caravan to school buildings Sunday to demand a full return to in-person learning for the district's secondary school students.

Health experts agree "kids need to be back in schools," said organizer Stacy Murphy, an Amityville schools guidance counselor whose two children attend elementary school in Smithtown. "They’re falling behind in school and do not feel prepared. They’re isolated from teachers and isolated from peers."

District Superintendent Mark Secaur at a Jan. 26 online school board meeting said the district would begin a staggered return to five days for grades 6-12 no earlier than March 1, delaying for the second time a tentative start date because the infection rate of the virus that causes COVID-19 "has simply been too high and bringing back more students would exacerbate staffing and quarantine concerns."

The district calls its timelines "aspirational," though Secaur said he is more confident about the timing now than when earlier timelines were announced.

Newsday reported in November that 61% of Long Island schools were using a hybrid schedule, 34% were in-person and 4% were remote. The state Education Department said current data was unavailable.

"Our approach has been in keeping with the vast majority of districts," Secaur wrote in an email. "We believe that the available research supports our approach to this point ... we are excited about the possibility of bringing back all of our secondary students when we deem it safe to do so."

The district traced some surges to dance class, hockey, gymnastics and a New Year’s Eve party.

Secaur said he also worried about staffing levels, though he did not provide statistics. Janitorial staffing was a "major source of concern" and the district is competing with others for nurses and others staffers, he said.

Smithtown families held four rallies for in-person school last summer. Laurie Pisciotta, a marketer with a daughter in 12th grade and a son in eighth grade, said she planned to join Sunday. A year of hybrid learning had sent her children into an academic "downward spiral" and she questioned whether Smithtown administrators had done everything possible to return children to in-person school. It galled her to watch the progress in neighboring districts that have already done so, like Hauppauge and Three Village. "We've been sitting here waiting for our turn and it's not happened," she said.

Sunday’s caravan is scheduled to meet at the Nesconset library before traveling to every middle and high school in the district and ending at the New York Avenue administration building.